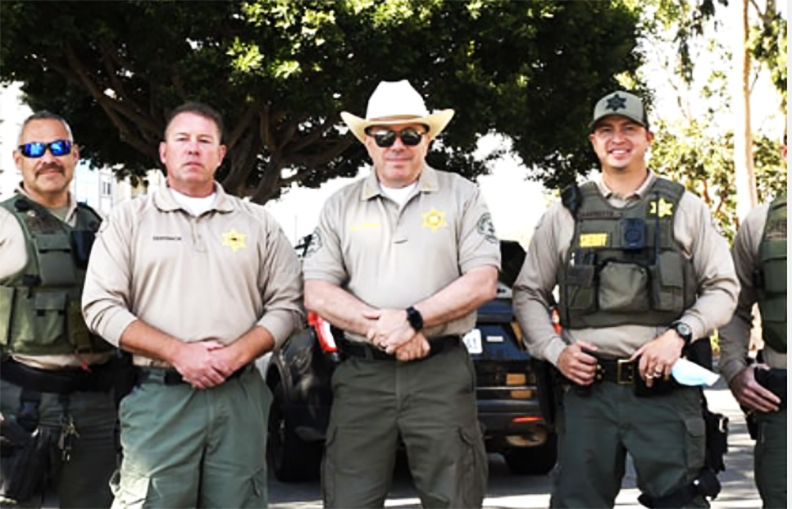 Alex and Co 2022 via https://alexvillanueva.org

This past Tuesday, July 12, was not the greatest of days for Sheriff Alex Villanueva.

First, the Los Angeles County Board of Supervisors passed a motion giving the go-ahead for a special election in November to ask county voters to grant the board the authority to remove the county’s sheriff with a four fifths vote if they deem it necessary, “for cause…”

The concept of a county board of supervisors having the power to fire an elected sheriff has already been tested in San Bernardino County, where the SB board acquired similar powers to remove their sheriff.  Sheriff Gary Penrod, challenged the board’s new power, but got firmly shot down by California’s Fourth Circuit Court of Appeals.

In other words, if the LA County voters think the change in the county charter is called for, the change will almost certainly stick, legally.

The motion, authored by Supervisors Holly Mitchell and Hilda Solis, passed 4/1, with Supervisor Kathryn Barger the only no vote, although even Barger seemed torn.

Later on Tuesday, Villanueva’s day did not improve when the Los Angeles County Democratic Party voted by a wide margin to endorse former Long Beach Chief of Police, Robert Luna to replace the incumbent sheriff when the two face each other in the November runoff.

This is a large turnaround from 2018 when Villanueva’s dark horse run to replace then-sheriff Jim McDonnell was greatly aided by the fact that Villanueva courted and won the support of  most of the county’s  democratic voter organizations, a smart strategy that was among the keys to his success.

Of course, if Luna wins this coming November, Tuesday’s motion will be a non-issue for Alex Villanueva. But, if voters give the sitting sheriff a second term, while county voters also give the supervisors the power to remove a sitting sheriff “for cause,” Villanueva—who has characterized the motion as an anti-democratic overreach—likely has reason for concern.

The term “for cause,” as defined in Tuesday’s newly-passed motion, is “a violation of any law related to the performance of their duties as sheriff;  flagrant or repeated neglect of duties; a misappropriation of public funds or property; willful falsification of a relevant official statement or document; or obstruction of any investigation into the conduct of the Sheriff by the Inspector General, Sheriff Civilian Oversight Commission, or any government agency with jurisdiction to conduct such an investigation.”

The latter item in particular about the sheriff engaging in “obstruction” of investigations into the sheriff’s conduct by any of the county’s oversight entities, could be quite problematic for Sheriff Villanueva.

As recently as Friday, July 1, 2022, Villanueva and his undersheriff, Tim Murakami, declined to show up at a special hearing called by the department’s Civilian Oversight Commission (COC), one of a series of hearings that are part of the COC’s probe into the department’s deputy gang problem that, despite his contention otherwise, Villanueva has aggressively chosen to ignore.

Yet, although the sheriff and his second in command were served with legal subpoenas by the COC, which has subpoena power, instead of showing up, Villanueva sent a message through his attorney that he could not comply with the subpoena to testify under oath  because he “fears for his safety” at the hearing, which was being held on the Loyola Law School campus. He was fearful specifically, he said, because he’d been informed that some of the community members attending previous COC hearings had worn t-shirts adorned with the message: “F— the sheriff.”

Murakami, who was also subpoenaed, sent a similar message saying he could not attend because the stress of testifying at the hearing would endanger his health. The undersheriff enhanced his claim of health vulnerability by sending the oversight commission a photo of himself in a t-shirt adorned with what is reportedly the symbol of a deputy clique known as the Spartans that is located at the department’s Century station (although WLA has yet to be able to positively confirm the Spartan reference).

In addition to blowing off legal subpoenas, when it comes to oversight Villanueva has repeatedly targeted  oversight officials and other perceived political adversaries, with what appear to be specious criminal investigations that never seem to result in actual charges.

When it comes to Inspector General Max Huntsman, in addition to opening a criminal investigation on the board-appointed former prosecutor, Villanueva has taken to repeatedly characterizing the IG as a “holocaust denier.”

Then early this spring, after the LA Times reported the cover up of a now notorious case involving a sheriff’s deputy who knelt for an extended period of time on the neck and head of a handcuffed man who was in jail awaiting trial, causing the man to be injured, the sheriff began retaliating against whistleblowers seemingly in order to distract attention from his own actions in allegedly attempting to keep the alarming-looking video of the incident out of public view.

Obstruction and the Bandito factor

In the last few months it has also come to light that the sheriff appears to have also deliberately obstructed a 2018 criminal investigation involving  four sheriff’s deputies assigned to the department’s East LA Station, who violently assaulted another group of ELA deputies whom the first group reportedly disliked.  Furthermore, the assaults by the first four were aggressive enough that two of those on the receiving end were badly enough injured that they had to be hospitalized.

For those unfamiliar with what has now become known as the Kennedy Hall incident, the case was—and still is— important for a number of reasons.

For one thing, when four deputies assigned to a particular LASD station decide to violently assault another group of deputies from the same station, it suggests that something problematic was going on at that station, as evidenced by the assault that precipitated the fall of 2018 criminal investigation.

It has now been well-established that the four men who did the assaulting were considered to be  “shot callers” of the deputy gang known as the Banditos.  The brawl, which took place at an off-duty party at a local rentable event venue called Kennedy Hall, consisted of the Bandito group physically attacking four other station deputies who, according to a large and detailed civil rights lawsuit, failed to go along with the Banditos often illegal actions.

In other words, much or all of the motive or motives for the assault likely had to do with the Bandito culture, which had taken root to an unhealthy degree at the East LA station.

Yet, as we also now know, Sgt. Jefferson Chow, a 26-year veteran of the LASD, who was the lead investigator on the Kennedy Hall case for the department’s Internal Criminal Investigations Bureau, or ICIB, was severely limited in his ability to do the thorough investigation Chow believed was needed due to a directive from then-newly elected Sheriff Villanueva, that Chow could do no questioning or probing whatsoever having to do with  the subculture group in the East LA. station.  Namely the Banditos.

(For more on Chow’s sworn account of his experiences with the Kennedy Hall investigation, including his investigator’s log, see this WLA story.)

After Chow’s deposition became public, former LASD Chief Matthew Burson described in his own sworn declaration that he had been instructed by Sheriff Villanueva—reportedly via the intermediary of Villanueva’s then new chief of staff, Lawrence Del Mese—to tell Sgt. Chow to close his eyes to the issue of deputy cliques.

A few weeks later at the July 1, 2022, at the third Civilian Oversight Commission special hearing on deputy gangs (that the sheriff and the undersheriff did not feel safe attending), Burson elaborated on the issue.

According to Burson, when Villanueva gave the order via his new chief of staff, Lawrence Del Mese, that would effectively derail the investigation into the Bandito assault, the new sheriff had been sworn into office four days before.

(Del Mese, also testified under oath at the July 1 hearing, but appeared to have severe memory problems for much of his testimony.)

There’s still more to the Kennedy Hall story, but the bottom line is this: according to those directly involved, one of Villanueva’s first acts as sheriff—which was evidently in the works even prior to his being sworn in on December 3, 2018—was to obstruct a criminal investigation that pointed beyond itself to a deputy gang culture embedded in the department.

Interestingly, one of the new sheriff’s other very first acts—also begun before he was officially sworn in—was to attempt, with a spectacular lack of success, to rehire former deputy Caren “Carl” Mandoyan who was fired by Villanueva’s predecessor, then-Sheriff Jim McDonnell, for allegations of domestic abuse, stalking, spying on his ex-girlfriend, herself a deputy, and provably lying about his actions to internal affairs investigators.

In addition to the above, Mandoyan threatened his ex with career harm, claiming that, as a member of the deputy gang The Grim Reapers with friends in high positions, he easily could make good on the threat.

The Grim Reapers, as it happens, is the deputy clique that Villanueva’s former chief of staff, Larry Del Mese, had joined in his earlier years, reportedly rising to become a shot caller of the group, according to various department sources. “He was known as ‘the gatekeeper,’ said Lt. Eric Strong, who ran for sheriff against Villanueva this past June, coming in 3rd behind Robert Luna. “You had to get past him to be invited to join.”

(At the July 1, 2022, COC hearing on deputy gangs Del Mese admitted to Grim Reaper membership, but said he had removed his tattoo, and remembered little else about his membership except, when pressed, he recalled that his Grim Reaper ankle tattoo was numbered 22, meaning he was the 22nd person to be inked into group membership.)

“It’s gonna be real funny when you fuckin’ see just how much influence I have,” Mandoyan said to his ex in the recording that she managed to make of the phone conversation.

Villanueva did not give up on his quest for what turned out to be the illegal rehiring of Mandoyan, which the board of supervisors and a long list of local justice advocacy groups opposed, until, on September 28, 2020, Los Angeles Superior Court Judge Mitchell Beckloff ruled in a 17-page decision that the sheriff’s very fiscally costly attempt to reinstate the former deputy, was unlawful.

It was, of course, the Los Angeles County taxpayers who paid the bill for both sides of this legal fight.

So do the LA County Supervisors really need the power to fire an elected sheriff?  In November, we’ll find out what the county’s voting taxpayers have to say.

In any case, the majority of the long list of community members who commented virtually on the matter during Tuesday’s board meeting, strongly favored the motion’s passage.

“Checks and balances are the pillars of a strong and functioning democracy,” said Sam Lewis, the Executive Director of the Anti Recidivism Coalition (ARC), a support and advocacy network that works with formerly incarcerated youth and adults.

“No government official should have the kind of unchecked power that is claimed by this sheriff,” said Lewis, who is also a member of the county’s Probation Oversight Commission.

“Establishing checks and balances is long overdue.  So let the people speak.  Please put this motion on the ballot.  Let us determine if this is what we want.”

Photo at top of Sheriff Alex Villanueva and other LASD members, via https://alexvillanueva.org