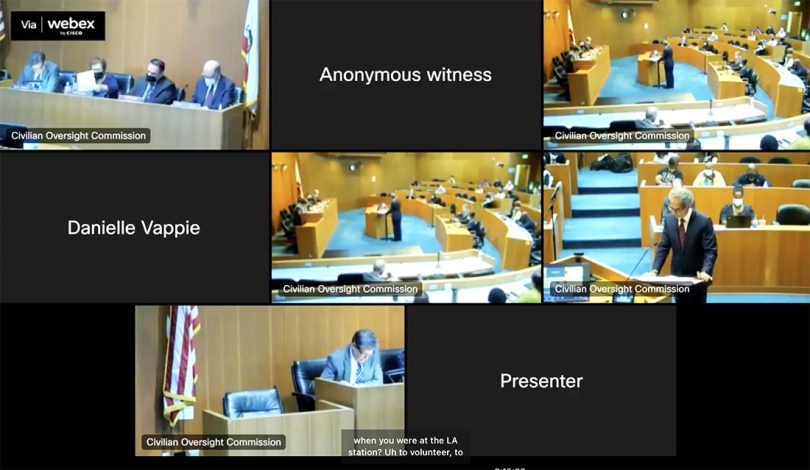 It’s been a scandal-filled week for the Los Angeles County Sheriff’s Department and the LASD’s leader, Alex Villanueva.

Yet, apart from this week’s panoply of search warrants, and other disturbing events, according to Sean Kennedy, who is the chair of the Sheriffs Civilian Oversight Commission, the COC continues to make measurable progress in its investigation of the fifty-year problem of deputy gangs that continues to infect the culture of the nation’s largest sheriff’s department.

Furthermore, said Kennedy, this progress is occurring in spite of a pattern of aggressive interference on the part of Sheriff Villanueva.

Since September 2021, which was when the LA County Board of Supervisors asked the COC to formulate a plan to address the LASD’s chronic deputy gangs issue, the commission has employed various strategies.

This year, the most dramatic of those strategies has been a series of public hearings that began on May 24 of this year.

To date, the COC has held a total five of these special hearings, with a sixth hearing scheduled for next Friday, September 23, at 9 a.m.

“Given the enormity of the LASD deputy gang problem,” wrote COC Chair Kennedy in an email,  “the COC expects to hold at least four additional hearings.”

The hearings, which are both in-person and live-streamed, have prominently included a string of subpoenaed witnesses testifying under oath.

During the previous five hearings, led by attorney Bert Deixler, a former federal prosecutor who is acting as the lead pro bono counsel for the COC’s investigative efforts, nine present or former LASD employees of various ranks have testified about their knowledge and personal experience regarding the department’s deputy cliques, in particular some of the most notorious of the groups, such as the Banditos, the Executioners, the Grim Reapers, and more.

According to Kennedy and others who are part of the investigation, the testimony has not only re-confirmed that numerous tattooed deputy gangs or cliques have operated for years inside the LASD, the witnesses have also confirmed that these groups meet the definition of a “law enforcement gang” that are prohibited under the newly enacted California Penal Code section 13670. The witnesses have described the influence of gang shot callers who routinely act in such a manner that cannot help but “violate the rights of community members and other deputies, foster insubordination, and undermine fundamental principles of professional policing.”

In other words, the focus of such deputy cliques, which typically exclude women from membership, and often extend such exclusions along racial lines.

In addition, said Kennedy, and other hearings observers, such as civil rights attorney Vincent Miller, the testimony at the hearings has pointed to the fact that Sheriff Villanueva and his leadership team have “affirmatively hidden deputy gang-related misconduct from the COC and the public.”

Sources familiar with what the COC has learned from this year’s hearings, told us that some of the department members and others subpoenaed for the hearings still to come, will be “remedy” witnesses, who can address the question of where the department can go from here that would be curative.

Threats and attempts at intimidation

Since the hearings began, Sheriff Villanueva has engaged in what COC chair Kennedy described as a “tsunami of obstruction,” a storm that includes threats aimed at keeping department members, current and recently retired, from responding to the subpoenas they have received to testify under oath.

Matters have not been helped by the fact that Villanueva’s efforts to prevent subpoenaed testimony are now also supported by the LASD’s two main unions.

“LASD’s culture of retaliation and enforced silence have hampered the proceedings,” wrote Kennedy in an email to the LA County Board of Supervisors late last week.

“Numerous employees of the LASD and other County agencies who have personal knowledge of deputy gangs have refused to testify before the COC because they fear retaliation and physical harm from the department.”

It has not helped, said Kennedy, that “Villanueva and other LASD leaders have instructed subpoenaed employees not to testify.”

When ordering people to ignore the subpoenas hasn’t worked, the sheriff and those who work closely with him, have reportedly used other forms of intimidation.

For example, as WitnessLA reported last month, there is the matter of LASD Sergeant Vanessa Chow, who has become a whistleblower along with her husband, Sergeant Jefferson Chow, who was a critical witness at one of the COC meetings. On the day of Jefferson Chow’s testimony, after the couple returned from Loyola Law School, where the COC hearings have been held, they found that an LASD surveillance unit with tinted windows had pulled up in front of their home   The unit finally vanished when Vanessa Chow came out of the couple’s house and began recording the car and its occupant or occupants.

Reportedly, however,  that one lurking car wasn’t the end of it.  Last Wednesday, two additional patrol cars showed up at the Chow’s house.  The cars arrived at two different times, and each reportedly stayed for around a quarter hour, as if engaging in surveillance.  Again, Vanessa Chow videoed the uninvited patrol cars, eventually causing each to leave.

In another recent tactic launched earlier this month, Sheriff Villanueva filed a lawsuit to disqualify pro bono counsel Deixler for “conflict of interest.”

No one we’ve spoken to expects the Deixler lawsuit to go anywhere, legally.

Yet, the even frivolous claims of conflict of interest  reportedly have served to chill other lawyers from volunteering their time to assist the COC in developing the evidence of alleged deputy gangs.

Villanueva’s attempts to derail the investigation or any form of oversight, has also arguably included the tactic of criminally investigating those he perceives as his adversaries.

“The reality is that Sheriff Villanueva’s steady stream of public ad hominem attacks on commissioners,” and worse, has “made it very difficult to recruit new commissioners,” said Kennedy.

Yet, despite the obstructions, the COC hearings have continued to uncover “substantial evidence of deputy gangs within the LASD and the pernicious effects of deputy gang-related misconduct on the community and within the department,” Kennedy

LASD Unions and the Board of Supervisors

As mentioned above, the LA Sheriff’s Department’s two main employee unions have also been obstructive of the COC hearings.

Specifically, the Association of Los Angeles Deputy Sheriffs (ALADS) has attempted to thwart the COC’s hearings by commissioning a letter from a law professor, who supported Sheriff Villanueva’s claim that investigating whether his employees belong to a deputy gang would violate their First Amendment rights.

(For its part, the Professional Peace Officers’ Association or PPOA, which is the supervisors’ union,  filed a complaint with the Employee Relations Commission claiming that the county was required to negotiate with the unions before the COC could issue subpoenas to their members. The COC respectfully disagreed.)

The COC tried to factually refute this ALADS-commissioned letter by releasing a 2021 County Counsel legal memorandum, which concluded the exact opposite of the ALADS guy (as have a string of other high profile attorneys). Yet, when the COC asked to use the 2021 memorandum, the commission was advised by County Counsel “that only the BOS could authorize the release of the memorandum.”

Inexplicably, requests from Kennedy and the COC to the board to release the First Amendment memorandum have gone unanswered for a year.