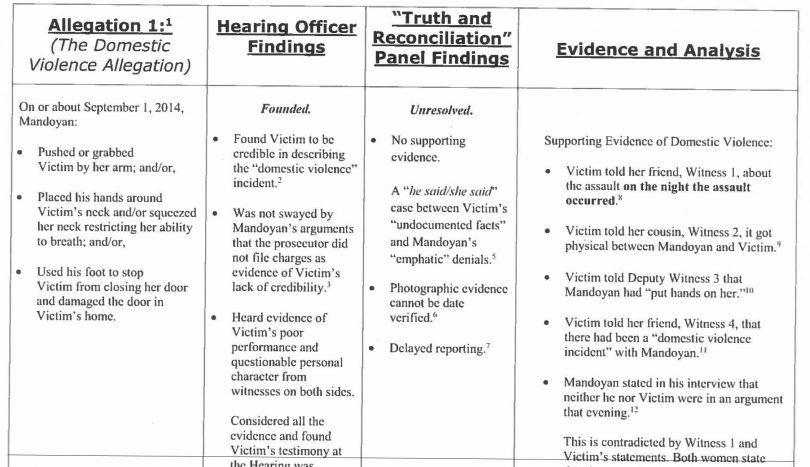 It’s not been an easy week for Los Angeles County Sheriff Alex Villanueva.

On Thursday morning, the LA Times broke the news that the FBI is now investigating the LASD’s deputy gang problem—prominently including the influence of the Banditos clique in the department’s East LA. Station, which has, of late, become a lawsuit factory.

The news that the feds were stepping in came after Sheriff Villanueva announced in late June that he’d transferred 36 of the members of the Banditos out of East LA, and thus had the deputy cliques matter well in hand.

Yet, credible sources inside the station have made it clear that the sheriff’s claim of all these Bandito transfers simply wasn’t true, that the Bandito’s were still in ELA in significant numbers, still in many ways calling the shots—much to the dismay of the many dedicated, non-inked deputies who work at the place. 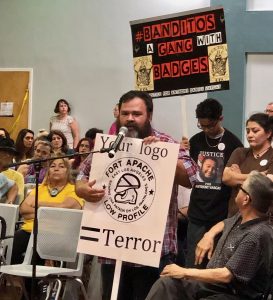 On Thursday night, July 11, the message that the department’s deputy gang problem was far from solved was reiterated by many among the large crowd of East Side residents who attended a packed-to-the-rafters community meeting hosted by the LASD’s Civilian Oversight Commission.

And then earlier this week, the Office of the Inspector General released an exhaustively-researched analysis of the sheriff’s so-called Truth and Reconciliation Program—specifically looking at how the program worked when it came to the controversial re-hiring of Deputy Caren Carl Mandoyan, a move that is still the subject of legal action on the part of the LA County Board of Supervisors.

The OIG’s take on Mandoyan’s firing and re-hiring

In order to write their 34-page report, the  OIG analysts reviewed well over 2000 pages of documents, plus photos, videos, interview transcripts and more, most of which WitnessLA has also reviewed.

(You can review much of this material yourself, and thus draw your own informed conclusion, by delving into the information-packed cache of “exhibits” the OIG has helpfully provided).

This rigorous analysis led the OIG investigators to a series of conclusions about the sheriff’s process in reinstating Deputy Mandoyan, prominently including the following:

1. Contrary to what the sheriff and his Truth and Reconciliation panel have claimed, “substantial evidence“ exists in support of the Civil Service Commission’s decision to uphold Carl Mandoyan’s discharge from the Los Angeles County Sheriff’s Department.

In other words, based on the actual evidence, and the testimony of a list of credible witnesses, Mr. Mandoyan appears to have done what he was accused of doing—from the alleged physical attack on his then-girlfriend, who was also, at the time, a deputy sheriff, to bullying and attempting to control both the girlfriend’s social life with women’s friends, and her work life, to his multiple attempts to break into her house, then lying about his actions to Internal Affairs, to threatening the alleged victim with reprisals from his powerful “Grim Reaper” friends, and other unpleasant behavior that is alarming on its face, but particularly so when it comes from someone with a badge and a gun who is tasked with enforcing the law.

(The Grim Reapers, for anyone unfamiliar, is the name of another of the department’s notorious deputy cliques. Mandoyan has admitted he has a Grim Reaper tattoo. And the sheriff’s recently-replaced Chief of Staff, Lawrence Del Mese, has long been known as someone once high up on the  Grim Reaper food chain.)

Among the OIG’s list of exhibits is the transcript of a phone call that Mandoyan made to the alleged victim—whom we’ll call Deputy X—in which he threatens her with retaliation by his well-connected Reaper pals. “It’s gonna be real funny when you fuckin’ see just how much influence I have,” he says charmingly.

(We’ll have more on that call in a minute.)

2. Despite all of the above, the sheriff and his Truth and Reconciliation panel concluded that Mandoyan’s wrongdoing was quite minor, which the panel primarily described as “poor judgment and decision-making skills,” all of which did not “rise to the level of discharge.”

According to the OIG’s report, however, the panel drew those conclusions after unaccountably electing not to consider “key pieces of evidence regarding Mandoyan’s actions,” including a bunch of video evidence, photos showing injuries to Deputy X and to the door of her bedroom which Mandoyan allegedly kicked trying to get to Deputy X after she escaped him,  the testimony of important witnesses who could corroborate certain incidents and/or actions by Mandoyan, plus the transcript of Mandoyan’s creepy threatening call, which Deputy X recorded—so Mandoyan couldn’t delete it, as he reportedly did routinely with anything on her phone he didn’t happen to fancy.

3. The choice to reinstate Mandoyan was not a neutral process of picking “low hanging fruit,” as the sheriff has repeatedly stated.  Re-hiring Mandoyan had been high on Sheriff Villanueva’s To-Do list, well before he was sworn in. Furthermore, the issue of whether or not Mandoyan was going to be found appropriate for reinstatement was never in question.

Who you gonna believe, me or your lyin’ eyes?

One of the most interesting sections of the report has to do with the string of public statements made by Sheriff Villanueva about Mandoyan’s case:
“Mandoyan’s due process rights were violated,” the sheriff said, and “Mandoyan’s alleged conduct should not have resulted in discharge,” and “the Department’s investigation and adjudication of Mandoyan’s case was biased,” and “important exculpatory evidence was not presented at the Civil Service Hearing,” and finally, “the Truth and Reconciliation Panel came to its own findings without being influenced by any outside parties.”

After listing them, the report neatly demolishes all these complaints and objections by the sheriff.

And, about the contention that Mandoyan’s conduct should not have resulted in discharge,  interestingly, when Deputy X made a report to the El Segundo Police Department about Mandoyan’s behavior after she’d been allegedly choked by him to the point that she was afraid for her life, El Segundo Officer Marco Lemus, who interviewed Deputy X, described in his report the “visible injury” he saw on her skin where Mandoyan grabbed Deputy X.  Her bruises, according to Lemus,  were among of the elements that caused him to conclude that Mandoyan was “in violation of 273.5(a) PC, domestic violence.”  In his written account, Lemus also suggested the evidence pointed to a violation of 646.9 (a) PC “stalking.”

(All of these statements, indeed, appear to be less than truthful if one watches several of the videos that Deputy X made of Mandoyan trying to break in her house, such as the one above, and the two below.)

“Each of these reviewing bodies,” the OIG investigators wrote, “even if they were to have used the 2012 Guidelines [for Discipline] would properly have upheld the discharge of Mandoyan for making false statements since discharge was within the disciplinary range of either version of the Guidelines for Discipline.”

(Note: The OIG was referring to the 2012 LASD Guidelines for Discipline, which Villanueva has prefers, rather than the updated 2015 version of the Guidelines that former Sheriff McDonnell favored.)

The report sums up the guidelines issue this way:

“Courts have found that domestic violence demonstrates a ‘readiness to do evil,’ the federal government precludes the carrying of a gun for those convicted of the criminal version of such conduct, and unfailing honesty is essential to the core function of a peace officer.”

Unfit “for the position of Deputy Sheriff”

The OIG authors saved for last the matter of the transcript of the recording of the unpleasant phone call that Mandoyan made to Deputy X, and that she recorded.

Rather than summarize OIG authors’ commentary on the call, we have included their assessment nearly in its entirety:

“….the administrative investigation file reviewed by OIG staff included a transcript of a partial telephone conversation between the victim and Mandoyan,” they write. “The substance of the conversation is very disturbing and corroborates many of the victim’s allegations against Mandoyan. The victim has repeatedly stated that Mandoyan did not want her to go to briefings as one of the various ways Mandoyan exerted control over her life. The telephone transcript shows that Mandoyan told the victim not to go to station briefings. This is significant because Mandoyan unequivocally stated in his Internal Affairs interview that he never told the victim not to attend briefings. The telephone transcript shows that Mandoyan lied to Internal Affairs on this issue.” (Italics WLA’s.)

“In another portion of the telephone transcript,” the OIG authors continue, “Mandoyan makes statements such as “[i]t’s gonna be real funny when you fuckin’ see just how much influence I have.’ The victim accused him of being a ‘Reaper.’ She understood that to mean that he had friends that were also Reapers, who held higher positions and who had influence within the Department.  Mandoyan admitted he had a Reaper tattoo, but stated that it was a station tattoo and it did not mean anything.’ Mandoyan’s statements in this telephone call corroborate the victim’s assertions that he threatened to use his influence in the Department as a tool of fear against her.

“Mandoyan calls the victim a ‘cunt,’ accuses her of flirting with a fellow deputy, and seems agitated that the victim chose to speak to her [female] cousin. Here again, Mandoyan stated to Internal Affairs that he never told the victim not to speak with her cousin. These statements corroborate allegations that Mandoyan was jealous and wanted to control the victim’s interactions with others.

“The telephone transcript was not considered during the administrative investigation or the Civil Service Hearing because of admissibility issues.  However, those admissibility issues would likely not preclude the Department from considering the telephone transcript when deciding whether to re-hire a deputy. It is undisputed that the Department was aware of this recording and had questioned Mandoyan on its contents during his interview with Internal Affairs.

“Again, assuming that Mandoyan was ‘re-hired,’ the Department was in possession of now publicly available evidence that conclusively established Mandoyan’s dishonesty and unfitness for the position of Deputy Sheriff.

“This Office is aware of no case where a deputy was reinstated under similar circumstances.”

Note: The three videos above are from the Civil Service Commission Case File of rehired LASD deputy Caren Carl Mandoyan. In the two videos nearest the bottom, which depict a sequence, Deputy Mandoyan has allegedly broken into the apartment of his estranged girlfriend, Deputy X, via the bathroom window, after heading to her home just before he thought she would be getting off work. He allegedly did so, surreptitiously, not knowing that she had left her shift early, around 3:30 a.m. instead of 4 a.m. when it actually ended. Halfway through the first video, Deputy X  hears noises so tiptoes to the bathroom door and flings it open, allegedly catching Mandoyan in the act of breaking in. In video two, she is still trying to get him out, as the audio portion of the video makes clear. When Mandoyan repeatedly asks Deputy X, “Where’re you going to find one?” he is reportedly referring to an earlier conversation in which she told him she wants to find a non-toxic relationship, or words to that general effect.