As most readers know, on Friday, June 24, 2021, former Minneapolis police officer Derick Chauvin was sentenced by Judge Peter A Cahill to 22-and-half years in state prison for the murder of George Floyd.  The sentence Cahill set was higher than the guidelines for the crimes of which Chauvin was committed, and lower than the family of George Floyd would have wished, yet the sentence was still one of the longest any police officer in the nation has received in modern times for the death of a civilian.

Along with his verbal ruling, Judge Cahill issued a 22-page sentencing memorandum about his decision, which concluded with the following words.

“Part of the mission of the Minneapolis Police Department is to give citizens ‘voice and respect,'” Cahill wrote. “Here, Mr. Chauvin, rather than pursuing the MPD mission, treated Mr. Floyd without respect and denied him the dignity owed to all human beings and which he certainly would have extended to a friend or neighbor.”

Making sure that law enforcement, in addition to protecting the communities they police, gives those within those communities the “voice and respect,” that Judge Cahill described, is one of the most significant reasons for police oversight.

Los Angeles County has long struggled with police oversight, even though there is no question –legally speaking — about whether or not the county’s Inspector General, acting on behalf of the county’s board-appointed Civilian Oversight Commission (COC), has the right to  engage in rigorous oversight of the Los Angeles County Sheriff’s Department.

(The Los Angeles Police Department has its own inspector general along with the police commission.)

Yet, when it comes to the LA County, a cluster of local ordinances plus, more recently, California Assembly Bill No. 1185,  signed into law on September 30, 2020, by Governor Gavin Newsom, give the county’s two oversight entities all the power it needs, including subpoena power, to make sure their oversight has teeth.

At least that’s the theory.

Yet, in practice, Los Angeles County Sheriff Alex Villanueva continues to act as if he and the department he has led since December 3, 2018, when he was officially sworn in after his dark horse election victory, have no real obligation to cooperate with LA’s two oversight entities.

And so he doesn’t.

With this in mind, on June 15, Los Angeles County Inspector General Max Huntsman sent a letter to Sheriff Villanueva , and to the members of the county’s Board of Supervisors detailing 30 or more ways that Villanueva and his department have refused to cooperate with “lawful requests for documents and information” over the past two years of Sheriff Villanueva’s time in office.

The list of requests that were refused or simply ignored in the past two years is wide-ranging and disturbing.  Here are some examples:

In June 2020, IG Huntsman asked for a “list of citizen’s complaints against sheriff’s deputies,” after the season of marches and demonstrations “following the murder of George Floyd.”

Huntsman’s office also asked for any videos — recorded either by department members or bystanders — that related to the complaints.

Given the fact that marchers, community members, journalists, and even a group of lawyers who themselves got roughed up in the course of one demonstration,  had complained about the ways that the LASD had often handled the past year plus of protests.  Therefore the issue was an obvious one for the IG to probe.

Yet, according to Huntsman’s recent letter,  the sheriff’s department gave his office zero, in response to the OIG’s request.

The LASD was similarly non-forthcoming in November 2020, when the IG’s office asked for documents pertaining to the extremely controversial arrest and roughing up of KPCC reporter Josie Wang, which was — by the way — captured on video, showing that Wang had held up her credentials, and had complied with the law.

Regarding Josie Wang, sheriff’s officials forked over a boilerplate list of the department’s policies and directives regarding activities by the press.  But when it came to responding to the specifics of the actual request, which had to do with the arrest of Wang, and the actions leading up to it, again, nothing.

In the letter, about which Huntsman fielded questions at the board of supervisors’ most recent meeting, this past Tuesday, the inspector general also listed his request for certain documents relating to high profile fatal deputy-involved shootings,  such as the June 18, 2020, fatal shooting of Andres Guardado, and the October 6, 2020, deputy-involved death at Harbor-UCLA Medical Center of patient Nicholas Burgos.  Yet, consistent with the now established pattern, Huntsman and his office again did not receive what they had requested.

In that Max Huntsman was a prosecutor in his pre-IG legal career, he is very much aware of what his office should and shouldn’t be able to have, to keep from harming an active investigation. Yet, in working with Sheriff Villanueva, those boundaries seem not to matter.

The sheriff and the LASD also repeatedly blew-off Huntsman and his office regarding matters that the Board of Supervisors, who are technically Huntsman’s bosses, specifically asked him to examine.

A prominent example is the ongoing issue of deputy gangs.

Huntsman reported that, on September 20, 2020, he and his office requested information pertaining to a civil complaint filed by Austreberto Gonzalez about the existence of a secret deputy gang called “the Executioners” in the county’s Compton station.  Again, LASD higher-ups, including Commander Scott Johnson, made getting the needed information mostly impossible.

(WitnessLA broke the news of the lawsuit and the existence of the Executioners in July 2020.)

In January 2021, Huntsman requested to meet with the sheriff to discuss the department’s policy on “secret societies” in general, and the LASD’s policies on COVID-19, but Villanueva declined.

Similarly, when the OIG attempted to look into the report by the city of Compton that the department was billing the city for “ghost cars,” patrols by deputies at the Compton sheriff’s station that had not occurred, the LASD sent the IG’s office on a wild goose chase that resulted in none of the requested documents.

Huntsman was also rebuffed when his office requested information about deputies covering their names and badge numbers during a protest during the fall of 2020.  It didn’t seem to matter, said Huntsman, that deputies appeared to have violated a state law that doesn’t allow law enforcement officers to cover their names and badges without at least making their badge numbers visible.

Another issue that is prominently listed in the recent letter,  is the reportedly ongoing problem of what are called “PRMS terminals.”  (PRMS stands for Performance Recording and Monitoring System and, in the situation in question, this relates to elements of the department’s employment and discipline records.)

In any case, these PRMS terminals were reportedly operational in the OIG’s office during the term of former Sheriff Jim McDonnell, and stayed operational through to June 19, 2019 in Villanueva’s term.

Then, according to the report, Sheriff Villanueva and company shut down the PRMS terminals,  directly after the sheriff received a draft copy of Huntsman’s lengthy report on the rehiring of former LASD deputy Caren (Carl) Mandoyan.

“The list of lawful orders that the sheriff has disobeyed gets longer every day,” said a very frustrated sounding Supervisor Holly Mitchell at Tuesday’s meeting after Huntsman had given his report.

It’s a unique problem, said Huntsman, adding that the “sheriff’s habit of weaponizing criminal investigations” into the lives of people he disagrees with, is also unique.

On the topic of weaponized investigations, one of the items on Huntsman’s list of LASD’s failures to cooperate occurred in early March 2021, and pertained to a reported investigation by the sheriff’s department into the “social media accounts and online presence,” of Esther Lim, who was formally the ACLU’s court-overseen jails’ monitor.

The well-respected Lim now holds the post of justice deputy for Supervisor Hilda Solis, and the sheriff purportedly disagreed with some of Lim’s past social media postings.

Huntsman asked for various documents in relation to this purported investigation.  To date, according to the letter to Villanueva, the IG and his office have received nothing.

“His misuse of his criminal enforcement duties to target anyone who questions him, has grown more bold since the state’s Department of Justice began its investigation,” said Huntsman.

WitnessLA will have more on the issue of  the Villanueva administration reportedly misusing its investigative powers to target oversight officials and “political adversaries.”

Meanwhile, here is a copy of a new LASD “patch” that, according to WLA’s sources, is being posted on social media by some members of the Los Angeles County Sheriff’s Department. 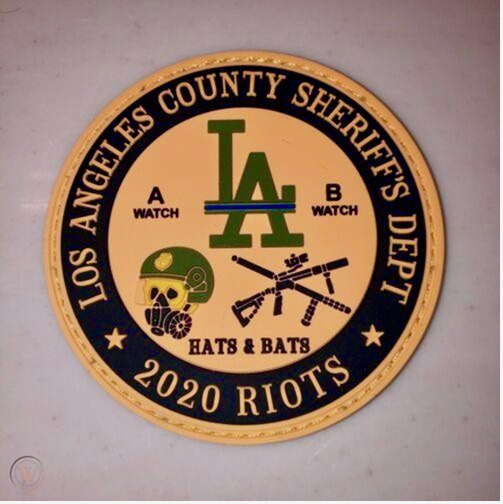