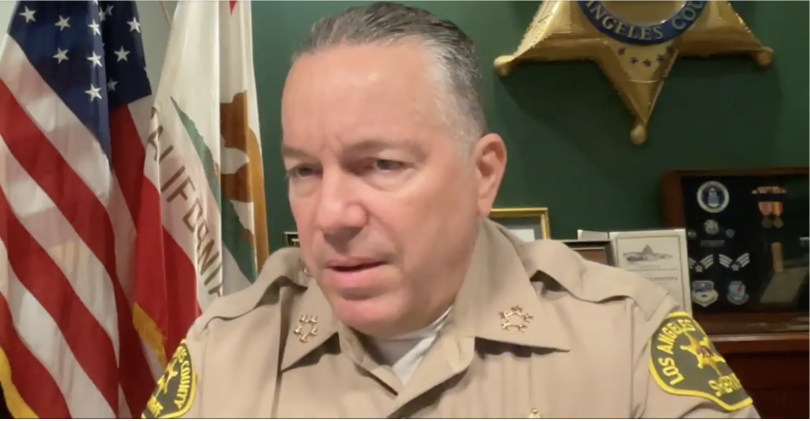 So, before we get to the main topic of this story, a few updates:

On Monday, April 4, Los Angeles Superior Court Judge Malcolm Mackey ruled that the head of the nation’s largest sheriff’s department must comply with a subpoena to answer questions under oath about the ongoing problem of deputy gangs in the LASD.

The sheriff will answer the OIG’S questions, said Savitt to the judge. “He just doesn’t want to testify under oath.”

“He’s going to be forced to testify under oath.  Period.” snapped Mackey, a former U.S. Marine who has been on the bench since 1978.

Predictably, by Monday afternoon, Villanueva had churned out an email announcing his intention to appeal Judge Mackey’s ruling regarding the subpoena, which he designated a “political weapon.”

By Wednesday, April, 6, however, the sheriff had redirected his ire toward a different target. Specifically, Villanueva devoted much of his live address on Facebook (and Instagram), to a weird and counterfactual character assassination of Robert Greene, the widely respected member of LA Times editorial board who won the Pulitzer Prize last year for editorial writing.

Villanueva’s tirade was related to a sequence of events that began last Tuesday when the sheriff sent out a colorful email (see below) stating that the LA Times Editorial Board could “#$@!%” its “endorsement,” and that he respectfully declined to participate “in the board’s endorsement process for sheriff.”

A few days later, Greene wrote an editorial pointing out that the board had received Villanueva’s letter saying he wouldn’t engage in the usual endorsement interviews while he was, in fact, being interviewed by the Times via Zoom, “as part of our endorsement process for the June election.”

Greene also noted that, the interview was made even odder due to the sheriff’s “out-of-nowhere, evidence-free assertion that LA County’s Inspector General Max Huntsman is a Holocaust denier.”

Meanwhile, WitnessLA has spent much of our time these past few days talking to LASD insiders who told us that the sheriff had provably lied at his press conference last week about his knowledge of and involvement with the investigation of a use-of-force incident involving an LASD deputy kneeling on the head of a jail resident for more than three minutes after the man was handcuffed and no longer resisting.

The incident in question occurred more than a year ago, but became news late last month when the Los Angeles Times published a story on what they described as a cover-up by unnamed LASD higher ups, accompanied by a video of the episode.

For those not following the matter closely, here’s the deal.

On mid-March 2021, an LA county jail resident named Enzo Escalante was in the holding area of the San Fernando courthouse, awaiting a court appearance for multiple charges, including murder.

The incident began as Escalante was walking down the corridor following another jailed man named Roger Ortis, when Escalante evidently said something in passing to nearby deputies, in response to which Deputy Douglass Johnson attempted to push him, face first, to the wall.

When pushed, Escalante turned back toward Deputy Johnson and swung at the deputy several times, appearing to hit him in the face at least once, maybe more.

Within seconds the jailed man was wrestled to the floor by multiple deputies including Johnson, and quickly subdued.

Simultaneously, Ortiz, the jailed man who was walking just ahead of Escalante, was also efficiently subdued and handcuffed by multiple deputies.

During the process of handcuffing Escalante, however, Johnson appeared to kneel first on the man’s neck, and then on his head for an extended period of time.

The series of events, including the punching by Escalente, and the head kneeling by Deputy Johnson, was captured on a surveillance video that the Los Angeles Times later acquired, a part of which you can view here.

According to Times reporter, Alene Tchekmedyian, in the full video one can observe Johnson keeping his knee on the jailed guy’s head for more than three minutes after Escalante was clearly handcuffed and appeared not to be struggling in any way.

As luck would have it, the incident occurred on March 10, 2021, the day after the first jurors were interviewed in the high profile and emotionally harrowing trial of former Minneapolis police officer Dereck Chauvin for the murder of George Floyd.

In other words, it was not the best of climates for law enforcement officers to be kneeling for any length of time on someone’s head or neck.

Worried about how Deputy Johnson’s actions would appear if made public, according to the Times’ story, unnamed LASD upper level officials buried the incident by not ordering an internal criminal investigation of Johnson’s use of force because they were worried about the “optics” of the three-minute plus neck and head kneeling, given its painful echo of the brutal actions that led to the violent death of George Floyd.

Furthermore, the optics problem would likely not be helped by the fact that the deputy who did the kneeling was one of the department members prominently named for taking highly invasive photos at the Kobe Bryant crash site.

So, who led the cover up?

After the LAT story came out, Villanueva called a press conference during which he vehemently denied the suggestion that he had participated in a cover upof the head-kneeling incident.

According to the sheriff, he didn’t see the video at all until November of 2021, approximately eight months after the incident with Escalante and deputy Johnson occurred.

Villanueva also said that, when he did finally learn of the matter in November 2021, he called for a criminal probe of the incident, and ordered the head-kneeling deputy to be relieved from duty.  Then he demoted two members of his command staff for their supposed part in the cover-up.

According to WitnessLA’s sources, however, the big problem with the sheriff’s description of what he knew and when he knew it, is that it simply isn’t true.

To the contrary, Sheriff Villanueva was reportedly given the surveillance video in mid-March 2021, within days of the so-called bad optics episode, and he watched the video in the company of multiple department higher-ups, including then Assistant Sheriff Robin Limon, and Undersheriff Tim Murakami.

“He definitely saw the video within a few days of when it occurred,” said one of our department sources.

“Blanchard was there because it was played at Blanchard’s desk,” a source explained. “And his office is not private. It’s in the open, which means there were several professional staff members present.”

Among the problems with the sheriff continuing to double down on this story of not being aware of the incident and the video until last November, is that the list of people who know is story is untruthful is a long one.

For example, the DVD itself was reportedly created at Court Services headquarters,” And those who were asked to create it, “knew they were creating the DVD for the sheriff to look at,” a department source told us.

The slo-mo charging of Enzo Escalante?

According to our  sources, nearly all of whom asked not to be named, another significant part of the reported cover-up has to do with the inexplicably delayed investigation into the actions of Enzo Escalante, the jail resident who swung on Deputy Johnson.

Normally, it seems. after an incident of this nature, in addition to a highly prescriptive use-of-force investigation that would have kicked in regarding Deputy Johnson’s actions (and that of other department members involved), a police report would have been generated regarding Escalante’s alleged deputy slugging behavior.

The report on Escalante then would have then gone to a detective who, after further investigation, would have passed the case to the DA’s office, where prosecutors would have subsequently decided whether or not to charge Escalante, and if so, what kind of charge or charges ought to be filed.

This should not have been a lengthy process.  Yet, not only did the potentially high profile case of head-kneeing Deputy Douglass Johnson never make it to the DA’s office for their consideration, as of July 2021, four months after Sheriff Villanueva reportedly saw the video of the incident, Enzo Escalente’s comparatively run-of-the-mill case was not given to county prosecutors until January 2022, approximately ten months after Escalente’s actions occurred.

“When I heard last July that the force investigation hadn’t gone to the DA’s office, I was floored,” said, former LASD Commander, Eli Vera, who is running for sheriff hoping to unseat Villanueva, but who, up until last week, was the co-commander in the Court Services Division, which provides deputies for the county’s various courthouses, including the San Fernando Courthouse.

Although Vera wasn’t serving at that division when the incident occurred, after he arrived as the new co-commander a few months later, he was quickly dialed in.

WLA’s sources, including Vera, have suggested that, the only likely reason that Escalante’s very ordinary case was delayed from reaching the DA’s office was the fact that, once in the hands of the DA, the case—including the problematic video—was no longer within control of the LASD and its sheriff. This also meant that the head-kneeling incident, which occurred subsequent to Escalante’s actions, could also have become more publicly available, a development that the sheriff reportedly was determined to avoid.

When someone leaked the video to the LA Times anyway, Villanueva flat out denied any early knowledge of the incident, or the cover-up, claiming his first news of Deputy Johnson’s head kneeling occurred in November 2021. Then, to further make his point, the sheriff demoted two members of his command staff—namely Chief Lajuana Haselrig and Assistant Sheriff Robin Limon—in an attempt to blame the cover-up on them.

Yesterday, Sheriff Villanueva further upped the anti regarding his refusal to admit having any knowledge of the bad optics cover-up by announcing he intends to seek criminal charges against the whistleblower who gave the head-kneeling video to the Times.

LASD Lieutenant Eric Strong who, along with Eli Vera and a list of others, hopes to make Villanueva a one term sheriff, had this to say about yesterday’s threat:

Villanueva, he said, “has set a tone for corruption and abusive behavior,” for the department that he leads.

“His latest move of intimidating personnel with a criminal investigation, after they exposed wrongdoing, shows that Alex is not above weaponizing law enforcement, even against his own staff.”