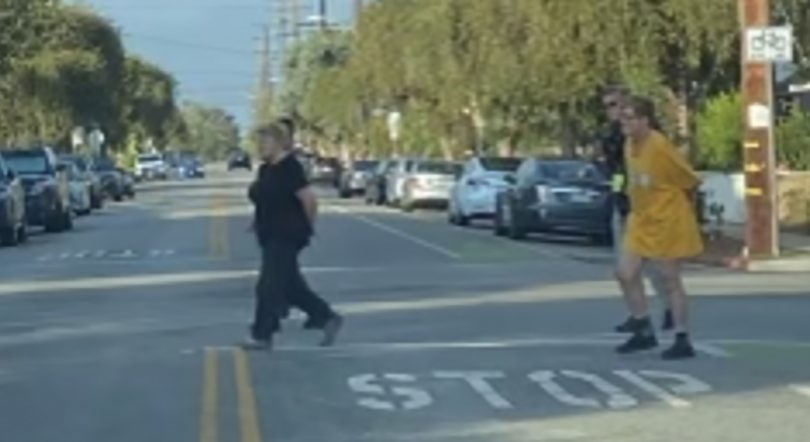 Sheila outside house after search

According to Kuehl, the warrant didn’t detail the reason for the search. She characterized actions as part of a bogus investigation.

“There is no investigation going on that would support this warrant,” she told a reporter as she stood barefoot outside her home.

Concurrent with the search of Kuehl’s house, deputies reportedly also searched the home of Patti Giggans, who is a member of the LASD’s Civilian Oversight Commission.

Giggans and Kuehl are friends, and the search of the supervisors house is reportedly related to an investigation having to do with Giggans.

Los Angeles Times reporter Alene Tchekmedyian was at the scene of the search of Kuehl’s house, and broke the news of the searches of both Keuhl’s and Giggans homes.

Later this morning, the sheriff’s department issued a short statement on the matter, which began as follows:

The locations listed included homes Kuehl, Giggans, plus the headquarters of the nonprofit Peace Over Violence, and LA Metro’s headquarters.

Peace Over Violence is the non-profit of which COC Commissioner Giggans is the longtime executive director.

According to a statement from the Sheriff’s Department, the LASD is investigating whether Giggans had improperly obtained the contract Peace Over Violence has with LA Metro, plus funding, from Kuehl.

The department said in a statement it’s unable to comment further on the searches because “[t]his remains an active investigation.”

Last July WitnessLA reported on Villanueva’s pattern of launching criminal investigations of those whom he sees as personal opponents, and the chilling effect those actions— which, thus far, never seem to result in actual charges—have had on any kind of oversight of the nation’s largest sheriff’s department.

Things got to the point, that in July 2021, Loyola law professor and present COC Chair,  Sean Kennedy, compiled a ten-page report on what appears to be a deliberate pattern.

The report describes how Sheriff Villanueva, with the help certain members of his administration, continues to target oversight officials and  other “perceived political adversaries,”  with what seem to be specious criminal investigations that, thus far, never result in actual charges.

(You can read Kennedy’s 2021 report for yourself here: LASD Investigations of Oversight Officials.)

Last year, in response to Commissioner Kennedy’s report, Villanueva seemed to re-illustrate the point in a fury-laced letter sent by the sheriff to Kennedy and the COC, which contained its own veiled threats.

(WitnessLA obtained the sheriff’s 2021 letter, which you can read here.)

The July 2021 letter from Villanueva, which was also signed by LASD Undersheriff, Tim Murakami, accused Kennedy of slander, and of “skirting numerous rules of conduct prohibited by the [California] bar.”

(WitnessLA will have an interesting update on Sheriff Villanueva and the the topic of slander later today.)

The 2021 Villanueva/Murakami letter followed-up by stating that Kennedy had gotten most of the information for his report from sources that have “no  basis in fact” other than being “published on the internet.”  To expand on this point, the sheriff’s letter name checked the LA Times, WitnessLA, LAist, La Opinión, ABC 7, and a few others.

Wednesday morning’s search of the headquarters of Peace Over Violence is not the first such action aimed at the non-profit led by Commissioner Giggans.

In February 2021, LASD officials told the press that the sheriff’s department had executed search warrants on LA Metro and Peace over Violence.

The searches were described last year as being part of a “criminal investigation” regarding contractual services that Peace over Violence provided to subway riders who been harassed or assaulted during transit.   (Peace over Violence is, according to its mission statement, “dedicated to building healthy relationships, family, and communities free from sexual, domestic and interpersonal violence.”)

A month after the apparent launch of the investigation of Peace over Violence, another “weaponized “investigation occurred in early March of 2021, in the form of a probe by the sheriff’s department into the “social media accounts and online presence,” of Esther Lim, who was formerly the ACLU’s court-sanctioned jails’ monitor.

The well-respected Lim now holds the post of justice deputy for Supervisor Hilda Solis, and the sheriff has purportedly disagreed with some of Lim’s social media postings of the past, well prior to her assumption of her post with Solis.

Things probably were not helped by the fact that Solis has repeatedly pushed hard for a comprehensive investigation of the LASD’s deputy gangs.

The board-requested investigation of deputy gangs by the COC and the LA County Office of the Inspector General has been repeatedly and aggressively obstructed by Sheriff Villanueva.

More soon. So watch this space

Photo above of Supervisor Sheila Kuehl leaving her home during the search courtesy of J. Sanborn