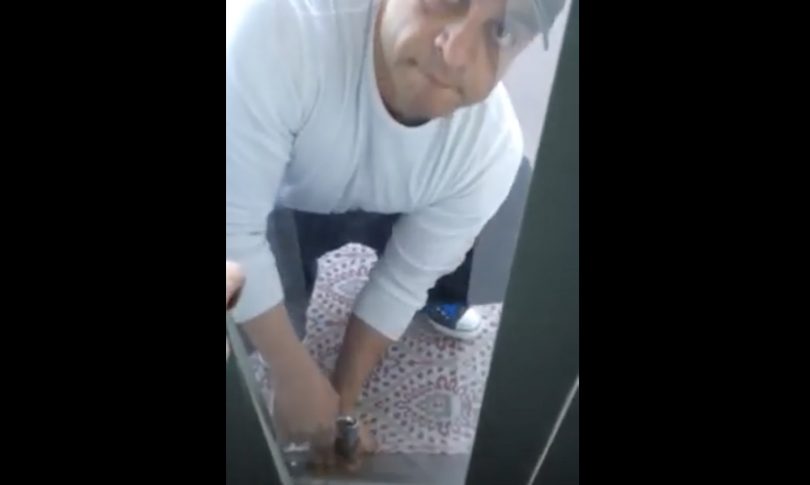 “This is the right decision under the law,” the county’s main attorney on the case, Louis “Skip” Miller, told WitnessLA. “This person does not belong in the Sheriff’s Department,” he said.

“We’re pleased with the ruling and that it’s the end of this case.”

The battle with the LA County Board of Supervisors over the legality or lack thereof, of the Mandoyan rehiring seemed to be one of the earliest elements that helped to drive what has become an unusually toxic wedge between the the sheriff and the board.

Mandoyan was discharged from the LA County Sheriff’s Department on September 14, 2016, by former Sheriff Jim McDonnell, for allegations of domestic abuse, stalking, and spying on his ex-girlfriend, who was at the time also a deputy also working at the department, then lying about it.  His termination was upheld by the county’s Civil Service Commission, after multiple days of hearings, with plenty of witnesses called by both sides.

Former deputy Mandoyan was reportedly a prominent presence in the new sheriff’s campaign, and also during the post-election transition period. He was one of those most visible on the stage during the sheriff’s swearing in ceremony, and was reportedly personal friends with the Villanueva family.

During the early weeks of the new sheriff’s tenure, Mandoyan was the first person to be re-instated by Villanueva as part of his post-election plans to launch a “Truth and Reconciliation” commission, which would review the cases of potentially wrongly terminated deputies—although at the time of Mandoyan’s reinstatement the promised commission reportedly had yet to be formed.  Yet, the sheriff has claimed otherwise.

In March 2019, the county and the board filed what is called a Petition for a Writ of Mandamus against the sheriff regarding his reinstatement of Mandoyan, which the board has repeatedly maintained was not legal.

The lawsuit was filed by the county after the sheriff refused to carry out an order issued by Los Angeles County Auditor-Controller John Naimo on February 20, telling Sheriff Villanueva that his reinstatement of Carl Mandoyan was “unlawful,” and that Mandoyan must turn in his badge and his weapon.

When nobody appeared to tell anyone to do any turning in of any kind, Naimo had a letter hand-delivered to Mandoyan on February 28, which ordered the former deputy to turn in his badge and gun.

“You are not authorized to serve as a county employee,” Naimo wrote tersely.

A list of legal actions followed after that from both sides.

Five months after the county’s court filing, the Office of the Inspector General released an exhaustively-researched analysis of the sheriff’s so-called Truth and Reconciliation Program—specifically looking at how the program worked when it came to the controversial re-hiring of Mandoyan

“Based on the actual evidence,” stated the report, “and the testimony of a list of credible witnesses, Mr. Mandoyan appears to have done what he was accused of doing—from the alleged physical attack on his then-girlfriend, who was also, at the time, a deputy sheriff, to bullying and attempting to control both the girlfriend’s social life with women’s friends, and her work life, to his multiple attempts to break into her house, then lying about his actions to Internal Affairs, to threatening the alleged victim with reprisals from his powerful ‘Grim Reaper’ friends, and other unpleasant behavior that is alarming on its face, but particularly so when it comes from someone with a badge and a gun who is tasked with enforcing the law.”

(The Grim Reapers, for anyone unfamiliar, is the name of one of the department’s notorious deputy cliques. Mandoyan has admitted he has a Grim Reaper tattoo. And the sheriff’s former Chief of Staff, Lawrence Del Mese, has long been known as someone once high up on the  Grim Reaper food chain.)

Among the OIG’s list of exhibits is the transcript of a phone call that Mandoyan made to the alleged victim—whom we’ll call Deputy X—in which he threatened her with retaliation by his well-connected Reaper pals. “It’s gonna be real funny when you fuckin’ see just how much influence I have,” he stated charmingly.

Despite all of the above, the sheriff and his Truth and Reconciliation panel concluded that Mandoyan’s wrongdoing was quite minor, which the panel primarily described as “poor judgment and decision-making skills,” all of which did not “rise to the level of discharge.”

According to the OIG’s report, however, the panel drew those conclusions after unaccountably electing not to consider “key pieces of evidence regarding Mandoyan’s actions,” including a bunch of video evidence, photos showing injuries to Deputy X and to the door of her bedroom which Mandoyan allegedly kicked trying to get to Deputy X after she escaped him,  the testimony of important witnesses who could corroborate certain incidents and/or actions by Mandoyan, plus the transcript of Mandoyan’s creepy and threatening call, which Deputy X recorded—so Mandoyan couldn’t delete it, as he reportedly did routinely with anything on her phone he didn’t happen to fancy.

The report also concluded that rehiring Mandoyan was not a neutral process of picking “low hanging fruit,” among deputies who asked to have their termination cases reconsidered, as the sheriff has frequently stated.

Instead, the OIG found that re-hiring Mandoyan had been high on Sheriff Villanueva’s To-Do list, well before he was sworn in to lead the nation’s largest sheriff’s department.

Furthermore, the issue of whether or not Mandoyan was going to be found appropriate for reinstatement, appeared never to have been in question.

It’s important to note that the sheriff and the LASD did their own lengthy and detailed report on the Mandoyan case, which you can find here.  WitnessLA has read both the LASD and the OIG reports, along with the more than 2000 pages of documents, plus videos, having to do with the Mandoyan case, all of which we got through the California Public Records Act.

The LASD analysis, dated October 1, 2019, contends that former LA County Sheriff Jim McDonnell, plus the county’s civil service commission and, more recently the county’s Office of the Inspector General, under the leadership of IG Max Huntsman, all got it completely and deliberately wrong when each concluded that Mandoyan should be fired from his position as a law enforcement officer.

Yet, if readers take the time to read both reports, which are genuinely interesting to examine, they can make up their own minds.

The lengthy LASD report became a part of one of a number of 2019 legal filings by Mandoyan. Most of the filings were in federal court, and were “dismissed with prejudice” by United States District Judge John F. Walter, who was appointed to the federal bench by George W. Bush, meaning they cannot be refiled in another form.

The very last filing, however, which was a “Verified Petition of a Writ of Traditional Mandate” (which, in general, asks an official or an official entity to do something), used the LASD report as its primary exhibit.

This legal action was filed in LA County Superior Court, not the Central District federal court, thus was in the court of Judge Mitchell Beckloff, who was the jurist who ruled that Mandoyan’s hiring was unlawful.