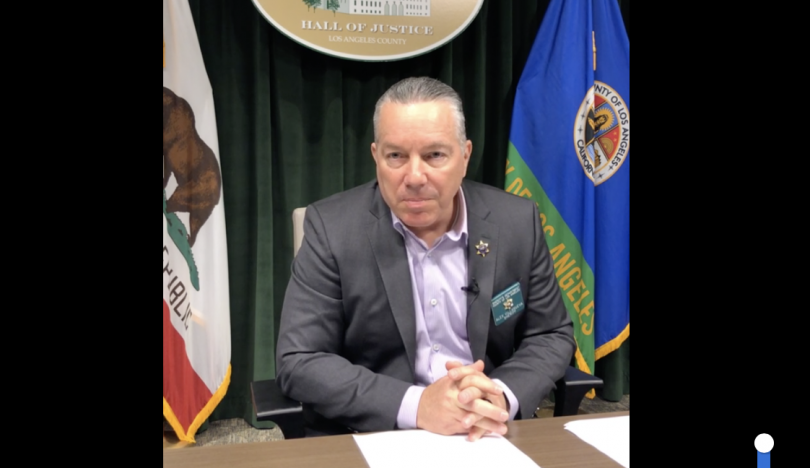 This morning, attorney Vincent Miller released the second complaint in a series of civil rights lawsuits brought by a string of department whistleblowers who allege they were retaliated against by Sheriff Alex Villanueva when they declined to go along with Villanueva’s self-serving and false descriptions of his actions regarding the now notorious case of Deputy Douglass Johnson, who knelt for more than three minutes on the head of jail inmate Enzo.

Each of these complaints brings with a raft of new details that directly contradict the elaborate story that the sheriff has been telling.

On Monday of this week, Miller filed a complaint in behalf of LASD Commander Allen Castellano that alleged, among other things, that Sheriff Villanueva blocked and stalled the investigation into the excessive use of force by Deputy Johnson to “avoid bad publicity for his re-election campaign.”

Yet, the plaintiff in today’s civil rights lawsuit is former LASD Assistant Sheriff Robin Limon who, according to the new lawsuit, has been retaliated against “because she has personal knowledge” of Villanueva covering up the highly problematic use of force incident by Deputy Johnson.

By “personal knowledge,” she means that, to quote Lin-Manuel Miranda, she was “in the room where it happened.”

Limon is an eyewitness. And what she saw goes far beyond the issue of the head-kneeling deputy.

We’ll get to her other personal knowledge in a minute. But first it’s important to know that, according to the complaint, Limon was the person who brought the DVD video of the head-kneeling incident to Villanueva’s office, “on or about March 15, 2021,” and then, together with Undersheriff Tim Murakami, and the sheriff’s aide, Anthony Blanchard, “watched the video with him.”

(It should be noted that at the sheriff’s recent journalist-threatening press conference, both Murakami and Blanchard each issued a phumphering pair of non-denial denials about whether or not they’d seen the video during those first days after the use of force incident.)

After viewing the video, according to today’s filing, Villanueva told Murakami, Blanchard, and Limon that “we” (LASD) “do not need bad media at this time,” and that he, the sheriff, would “handle the matter,” reportedly leading Limon to believe that the sheriff would do the right thing and “follow proper protocol.”

However, by handling the matter, Limon explains that she later learned that Villanueva actually meant he would proceed to “obstruct justice and direct a cover up of the incident.”

Specifically, according to Limon, Villanueva blocked an ICIB investigation and also blocked the filing of assault charges against the inmate, Escalante, even though proper procedure reportedly required the filing against Escalante—who slugged (or attempted to slug) the deputy on video—to take place quickly.

“Villanueva knew that if assault charges were filed against the inmate, his defense attorney would have gotten access to the video and the public could see it,” according to the complaint.

To once again remind readers of the timeline, March 15, 2021—which is the day that Limon states that the sheriff saw the disturbing video—is five days after the incident took place.

It was also seven days after attorneys began interviewing potential jurors for the trial of former Minneapolis police officer Derek Chauvin for the murder of George Floyd, causing the sheriff and other department members to worry about the “optics” of the three-minute plus neck and head kneeling, which was a painful echo of the brutal actions that led to Floyds violent death.

And the date when Limon reportedly watched the video with the sheriff was eight months and three days before November 18, 2021, which is the day that Villanueva would later claim—and still continues to claim falsely—that he first saw the video and knew of the incident.

Yet, according to Limon—along with others with whom WLA has spoken who have yet to come forward publicly, but who also reportedly have personal knowledge of the timeline—shortly after seeing the video the sheriff blocked a criminal investigation by the department into the problematic head-kneeling incident.

Then, months later, Villanueva began lying about the timeline of his knowledge, once the public learned about the incident and the disturbing video courtesy of the March 25, 2022 LA Times story on the matter written and reported by LAT journalist Alene Tchekmedyian.

Tchekmedyian is of course, the journalist whom sheriff recently threatened with a criminal investigation, a threat that he then retracted after his apparent attempts at press intimidation made national news.

A trove of knowledge of other alarming actions

However, Limon’s personal knowledge of the sheriff’s false narrative regarding the head-kneeling incident, turns out to be only one out of a trove of descriptions of alleged wrongdoing by the sheriff that Limon lays out in detail in the new complaint.

Among the other actions she describes are the following.

According to the complaint, in early July 2021, the sheriff “insisted on promoting a sergeant” to some sort of highly coveted position, despite there being no such position “to promote him into at that time.”

Limon said she told the sheriff she considered the promotion “improper.” The sheriff went ahead and promoted the sergeant anyway.

But the issue didn’t end there.

Approximately two months later, “while the employee was on a probationary period for his promotion,” he was arrested by the Beverly Hills Police Department on a domestic violence charge against his wife, “in public, while drinking alcohol with his firearm on him.”

The following week, Limon states she again “raised concerns” about the man, especially in view of the domestic violence arrest, but the sheriff was “dismissive,” and said his wife, Vivian Villanueva, “talked to the employee’s wife and it was now ‘a big nothing.'”

Nevertheless, due to the arrest, the man theoretically had stay home while the LASD investigated the matter. But the sheriff reportedly wanted to bring him back on duty anyway.

Limon states in the complaint that she told Villanueva that she thought it was improper to bring the employee back until the Internal Affairs investigation on the man actions and alleged policy violations was completed. In response, the sheriff reportedly told Limon to bring the sergeant back to work anyway, stating, “I am ordering you!”

Another alarming set of circumstances Limon describes has to do with the sheriff’s naming then Captain John Burcher as his new Chief of Staff.

Burcher, said Limon, had been “lurking around” the sheriff’s office and not tending to his actually work at his assignment. Yet, despite warnings, Villanueva assigned Burcher in the critical position of Chief of Staff.

Among the problems attached to Burcher that gave her misgivings, according to Limon, were the following:

On June 18, 2020, after Andres Guadardo was killed in a tragic and extremely controversial shooting by an LASD deputy, Burcher “began improperly posting on social media that the shooting was rightful.”

In his social media post, states Limon, Burcher included “several disparaging and expletive filled remarks, despite the investigation not being completed.”

Another reasons that Limon worried about Burcher’s rise on the departmental ladder was that when he was captain at the LASD’s Transit Services Bureau, he reportedly attempted to “cover up” an incident of a deputy allegedly stalking a resident.

The story, according to Limon, began when the deputy in question was cruising in his patrol car and spotted a woman who interested him driving her car and “ran her license plate to find her address.”

“Burcher tried to minimize the deputy’s discipline without an investigation,” said Limon.

When again, Limon urged the Sheriff “to put a hold on Burcher’s promotion,” the sheriff continued with the promotion to Commander.

Fast forward to the present when, according to Limon, although Burcher is assigned to the LASD’s Community Partnerships Bureau, Burcher actually is working “full-time on the sheriff’s re-election campaign, while illegally being paid by the County.”

But that’s not all.

According to Limon, on March 21, 2022, two female employees who work and report directly to the sheriff, reported to Sheriff Villanueva they were subjected to harassment and multiple repeated violations of the Policy of Equality by Burcher.

The Sheriff reportedly did nothing in response.

When Limon approached Undersheriff Murakami about the women’s allegations, Murakami told Limon that Burcher had been “admonished to stay away from the alleged victims.”

Burcher did not stay away from the victims, according to Limon.

Furthermore, despite the various allegations, Burcher has since been named by Villanueva as the Special Projects Commander reporting directly to Murakami. And he continues, according to today’s complaint, to openly work on the Sheriff’s re-election campaign during hours, when he is supposed to be working for LASD.

“The Sheriff ignored Complainant’s concerns this conduct was illegal.”

There is a lot more to the story of former Assistant Sheriff Robin Limon and her allegations, which she reportedly backs up with emails, texts, and other documents.

Plus, there are additional legal complaints coming from people who have direct knowledge of wrongdoing.

So watch this space

PS: Here’s the Limon complaint below

And you can find the Castellano complaint here.