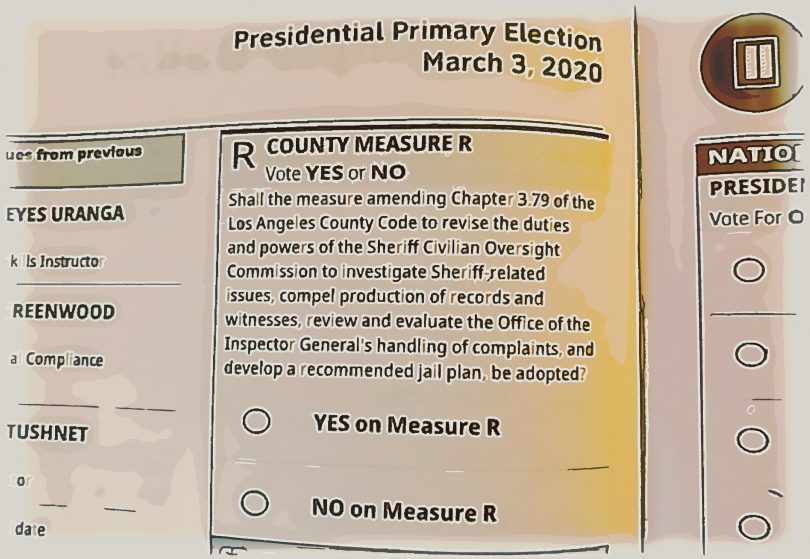 On March 3, and during the preceding early voting days, Los Angeles voters will decide whether to pass Measure R, a historic grassroots-led ballot initiative to empower civilian oversight of the LA County Sheriff’s Department and reduce the county’s overreliance on incarceration.

Spearheaded by Patrisse Cullors, co-founder of Black Lives Matter, political strategist Jasmyne Cannick, and other women and families impacted by the justice system, Measure R is Los Angeles County’s first-ever criminal justice reform brought to the ballot by citizens, and the county’s second citizens’ initiative ever, the organizers say.

The Reform LA Jails campaign behind Measure R gathered more than 246,000 signatures for the initiative — 100,000 more than necessary to qualify for the 2020 ballot — with plenty of time to spare before the final deadline. Measure R has garnered dozens of powerful supporters, as well.

Measure R is backed by a coalition of organizations including ACLU, Dignity and Power Now, Californians for Safety and Justice, Community Coalition, Justice Teams Network, and a host of others.

The LA Times and La Opinión have also endorsed the initiative.

“We know that jails alone are not the answer,” Senator Holly Mitchell (D-Los Angeles) said in support of the ballot initiative. “If we are serious about rehabilitation, prevention and improving our communities, then we must invest in local organizations and evidence-based practices that are effective.”

For those unfamiliar, Measure R would give the Civilian Oversight Commission (COC) overseeing the sheriff’s department the ability to subpoena documents and compel testimony. The ballot initiative would also require the county to develop a plan for reducing the LA County jail population.

To better understand Measure R, it helps to know some of the recent history of sheriff’s department oversight in LA County.

The Creation of the COC and OIG

On September 28, 2012, the Citizen’s Commission on Jail Violence presented their lengthy and meticulously researched report on problems in the sheriff’s department that had created a culture of corruption and violence in the nation’s largest jail system. The CCJV’s most prominent suggestion for reform was the creation of an independent “oversight entity,” that would have “unfettered access” to “department records, witness interviews, video footage, data, personnel, and facilities.”

At the time, there were already other oversight bodies monitoring the sheriff’s department, but they had no real power to affect change that an elected sheriff felt they had to follow. And over the next five years, more than 21 LASD members, including the sheriff and undersheriff, would be indicted by a federal grand jury, convicted, then sentenced to federal prison.

After the federal indictments were handed down, and in response to the CCJV’s report, the LA County Board of Supervisors approved the necessary county ordinances to create a new oversight system that took the form of the Office of the Inspector General in 2014.  Two years later, the board further approved the county code needed for the creation of a Civilian Oversight Commission (COC).

According to LA’s County Code, “the purpose of the Commission is to improve public transparency and accountability with respect to the Los Angeles County Sheriff’s Department, by providing robust opportunities for community engagement, ongoing analysis and oversight of the Department’s policies, practices, procedures, and advice to the Board of Supervisors, Sheriff’s Department, and the public.”

The board stopped short of equipping the new commission with subpoena power, however.

Since the COC’s creation, commissioners have had to rely on a memorandum of agreement dictating which documents the LA County Sheriff’s Department would share with the commission.

During former Sheriff Jim McDonnell’s years in office, compliance with the MOA was not perfect, according to Inspector General Max Huntsman, but it improved over time. When Sheriff Villanueva was sworn into office in December 2018, a new memorandum of agreement was not signed. And while sheriff’s officials say they have tried to follow the existing MOA, Huntsman says otherwise.

Just last month, on Tuesday, January 28, the county supervisors voted to give the Office of Inspector General the long-awaited subpoena power, which is slated to go into effect in a few days. Through the newly empowered OIG, the COC will be able to request subpoenas, but not issue them independent of the inspector general. 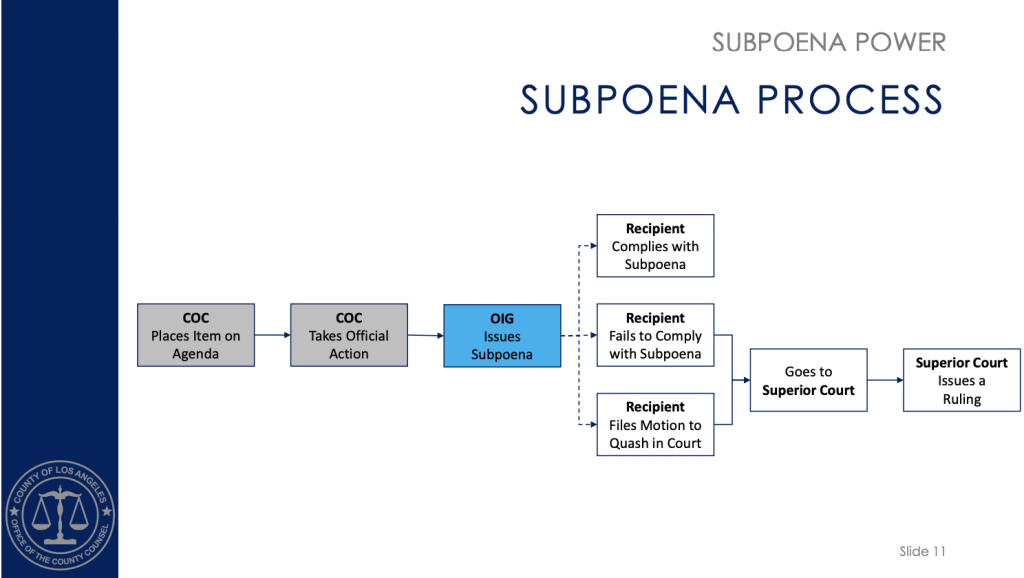 A primer on the soon-to-be subpoena process for the inspector general, courtesy of LA County Counsel.

Sheriff Alex Villanueva has said, however, that the COC and the Office of Inspector General have no need for subpoenas because the sheriff’s department is “not in the business of secrecy.”

Yet, the inspector general has said that the department often shuts down his requests or responds with radio silence. 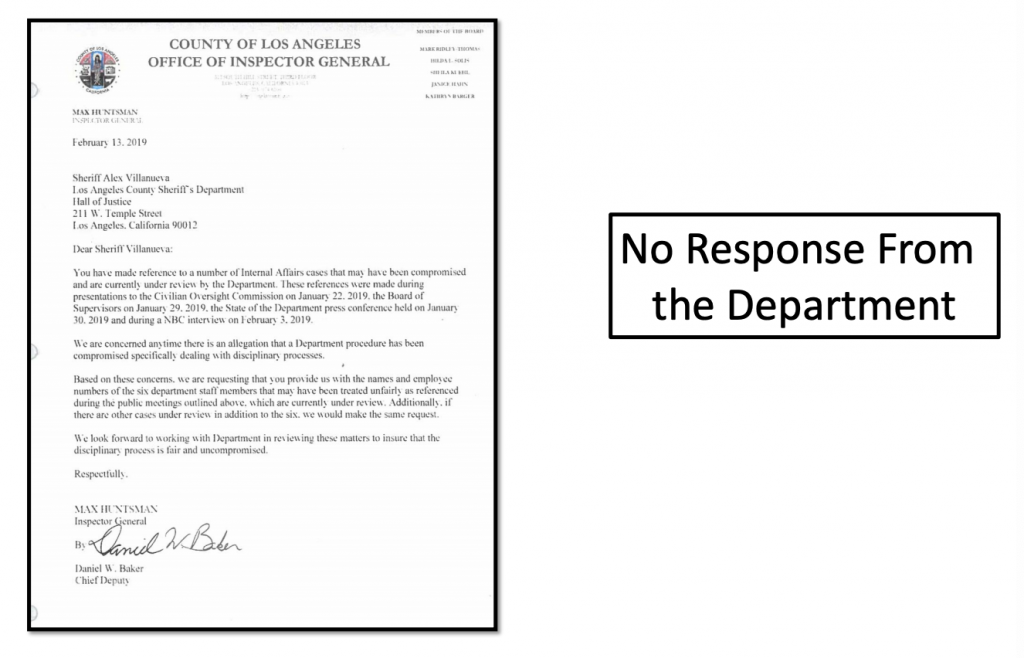 Last month, IG Huntsman gave the COC a presentation on correspondence with LASD regarding document requests.

According to Huntsman, the OIG has been denied access to key documents, including information regarding secret deputy cliques and the department’s hiring process — and its re-hiring process, in the controversial case of Caren Carl Mandoyan.

The inspector general, Villanueva has said, has presented subpoena power “as a fix all, and threatens to use it at every corner, despite the LASD offer to work together.”

In an ideal situation, the two oversight bodies would be getting the information that they needed through cooperation with the sheriff’s department. Absent that cooperation, however, subpoenas can become a necessary tool.

The sheriff can decline to cooperate with a subpoena from the OIG or COC, and/or legally challenge it. Either way, the superior court will then decide whether the sheriff’s department must comply.

In addition to subpoena power over the sheriff’s department, Measure R would grant the civilian commission the authority to conduct independent reviews of the inspector general’s handling of civilian and inmate complaints against the LASD.

The Other Half of Measure R: The “Comprehensive Public Safety Reinvestment Plan”

Beyond bestowing independent investigative powers, Measure R would also require the county to develop a plan within seven months for reducing the LA County jail population. The jail population hovered at an average daily population of 17,150 as of 2019, with over 100,000 booked into jail each year. LA County’s jail system is also known as the nation’s largest mental health care facility.

Approximately 30 percent of those in jail have open mental health cases. And, according to a January 2020 report from the nonprofit RAND Corporation, approximately 61 percent of the mental health population locked inside Los Angeles County’s jails could safely be released into community-based care. The problem is that the county must come up with enough community programs, services, and housing to serve those who would otherwise be locked — unnecessarily, according to RAND — inside county jails.

Part of the ballot initiative’s “Comprehensive Public Safety Reinvestment Plan” would include conducting a report on the feasibility of reducing jail numbers by diverting more than $2 billion in county money originally earmarked for a new jail (and then a new mental health facility), to the Office of Diversion and Re-entry and various community-based programs.

The board, to its credit, has recently been working toward these goals. The supervisors voted last August to dump their latest Men’s Central Jail replacement plan — a secure mental health care facility staffed primarily by the LA County Department of Health Services (DMH). Reform LA Jails, the coalition behind Measure R, rallied week after week to get the board to cancel the previous jail plans as well as the more recent DMH-managed version, which the group said was just another jail by a different name.

The board listened. A majority of the supes agreed that the plan (and the others before it) was not in keeping with the board’s intention to move to a “care first, jail last” model for its criminal justice system.

In addition to killing the jail contract, the supes commissioned two reports — one focused on how best to proceed with demolishing the crumbling Men’s Central Jail as quickly as possible, and another looking at what top-priority jail maintenance needs must be met within the facility to protect the constitutional rights of the men currently locked inside.

The board also called for research on the scope of the county’s diversion needs, and convened a workgroup to make recommendations for how best to reform the criminal justice system and reallocate the billions toward alternatives to incarceration.

Yet Measure R’s “Comprehensive Public Safety Reinvestment Plan” would include a feasibility study for a timeline on reducing jail numbers, especially for people with mental illness, drug dependency, and who are chronically homeless.

The feasibility study would also look at ways to reinvest county dollars toward “holistic mental health treatment; expanding youth centers and programs; reducing recidivism; alternatives to custody through the Department of Public Health; and increased funding to the Office of Diversion and Re-entry.”

The plan also seeks calculations of the costs and effectiveness of LA County’s current policies and practices compared with the options for reform. For example, Measure R would trigger a study comparing cost and the effects of mental health treatment inside the jails versus community-based drug treatment programs.

There’s more, so be sure to read the full text of the measure here, or the official summary here.