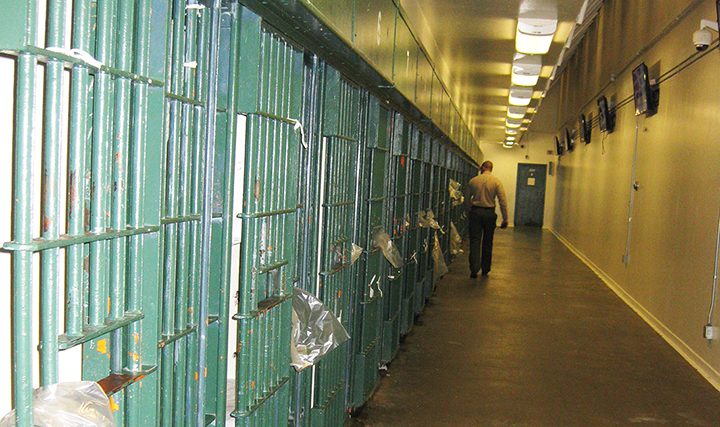 UPDATE: In a historic 4-1 vote, the LA County Board of Supervisors has chosen to cancel the contract to replace the dangerous and unhealthy Men’s Central Jail with a $1.7 billion mental health facility. WLA will have more on the story in the coming hours.

On Tuesday, August 13, the Los Angeles County Board of Supervisors may vote to cancel a massive $1.7 billion construction contract to replace the dilapidated and chronically unsafe Men’s Central Jail with a secure health care facility.

If the supervisors pass the motion authored by Supervisors Hilda Solis and Sheila Kuehl, which would cause the county to exit the McCarthy Building Companies contract, the move would mark the latest milestone in a 15-year journey toward replacing the jail, and, more recently, toward what the supes are calling a “care first, jail last” approach to criminal justice in the county.

In a narrow 3-2 vote back in February, the board of supervisors scrapped the increasingly controversial plan to replace Men’s Central Jail with a high-tech 3,855-bed “mental health jail,” known as the Consolidated Correctional Treatment Facilty (or CCTF), opting, instead, to build a new “mental health treatment center.” The idea was that the new facility–although still technically a lockup–would be operated and primarily staffed by the LA County Department of Health Services, rather than by the sheriff’s department, which would still have to provide a certain amount of security for the center. (While the current contract amount is $1.7 billion, the supervisors have $2.18 billion budgeted for the project.)

The change of plans did not satisfy opponents of the original jail replacement project, however. Through its #CancelMcCarthyContract campaign, the Reform LA Jails coalition–a group of justice reform advocates and community members led by Patrisse Khan-Cullors and Jasmyne Cannick–has kept urging the board to dump the new jail altogether, and instead focus that money and attention on diversion and other alternatives to incarceration.

Supervisors Sheila Kuehl and Hilda Solis, the two votes against the motion to switch to a mental health treatment facility, but still keep the rebuild project, argued that the change did not go far enough to reduce the county’s overreliance on incarceration. At the time, the two supervisors offered a competing motion that aimed to temporarily sideline the jail plans, years in the making, to give the county time to reevaluate the project, and ideally, find a solution that prioritized diversion and evidence-based alternatives over incarceration for LA’s justice system-involved residents with mental illnesses.

“It’s still a jail,” Supervisor Hilda Solis said, when she explained why she opposed the February vote. “It’s still preventing people from having freedom. Now we’re proposing the largest mental health institution. For many of us, that is not going to do.”

Peter Eliasberg, chief counsel of the ACLU of Southern California, agreed. “You cannot provide good mental health care in a facility designed for 4000,” Eliasberg said, regardless of whether that facility is a mental health center or a jail.

The supes who voted in favor of the February motion expressed concern, however, about having to spend even more than the agreed-upon $2.2 billion if they had to start over with McCarthy or another building company. The board was soon to be on the hook for a one-time $30 million payment to McCarthy to start the design process. Plus, starting in July, the county would have to start paying the building company an additional $7.7 million per month, according to the contract.

There was also the problem of slowing down the jail replacement process and thus, forcing more and more men to be incarcerated in the facilty, which was also dangerous and unhealthy for those who worked there.

So the jail contract stood.

The CEO’s Report on “Right-Sizing” the Jail Replacement

In that same February motion, LA County CEO Sachi Hamai and the Departments of Health Services and Mental Health were tasked with partnering with McCarthy to develop a “right-size” design for the mental health facility, returning to the supes in 90 days with their report.

The supervisors asked for a plan “informed by all of the leading research and information on mental health challenges experienced by those that come most in contact with law enforcement.”

On August 7, Hamai delivered her report to the board. The CEO laid out three options for housing approximately 4,800 people in varying combinations of non-custodial beds and custodial beds, either at a Men’s Central Jail replacement lockup, or in a renovated version of the Twin Towers jail.

Hamai’s report referenced a preliminary report from the Office of Diversion and Reentry (ODR) estimating that the county could feasibly divert 56 percent of the approximately 5,134 mental health inmates away from jail and into community treatment.

Despite expressing overall support for diversion efforts, Sheriff Alex Villanueva made clear that his office did not back any of the plans, which featured, at most, 2,400 jail beds–a number far too low in the sheriff’s opinion. The sheriff also said he was concerned by the estimated potential diversion rate, saying that the ODR “might not have considered all related factors,” when they came up with that number.

On August 8, One day after the CEO’s report arrived, the Board of Supervisors issued their agenda for the upcoming August 13 meeting, featuring three separate indicating that the county may move in an entirely different direction.

This coming Tuesday, the board will consider a trio of motions, including the first motion from Supervisors Solis and Kuehl to kill the current McCarthy mental health facility contract.

Citing the fact that the Office of Diversion and Reentry study–and a handful of others reports crucial to determining the right size for the mental health treatment facility–are not yet completed, Solis and Kuehl argue that the reports back from the CEO and Health Departments “clearly demonstrate the imprudence of proceeding forward with the design and construction of the original scope of the MHTC when it is clear that, at the very least, the design will need to substantially change once all of the facts are known.” The best move, according to the motion, would be to do away with the current design-build contract.

This plan, however, still leaves the problem of what to do with Men’s Central Jail and the men living inside it.

“While there is consensus about demolishing Men’s Central Jail,” said Supervisor Mark Ridley-Thomas, “the more important question of what should replace it, and how this would fit into our comprehensive strategy for criminal justice reform, remains unresolved.”

With this dilemma in mind, Ridley-Thomas and Supervisor Janice Hahn are also introducing a motion, which appears to build on that of Supervisors Solis and Kuehl. This second motion would commission a report on the feasibility of demolishing Men’s Central Jail, as well as a report on the top-priority maintenance needs within the current jail so that the county can “uphold the constitutional rights of incarcerated individuals.” The motion also directs the CEO to convene a workgroup of county departments and other stakeholders to “synthesize” all those soon-to-be-released criminal justice system reports and make recommendations for how best to reform the criminal justice system and replace the crumbling jail. Additionally, the motion directs the workgroup to come up with recommendations for reallocating 2019-2020 county budget funds set aside for the jail project toward alternatives to incarceration and other reforms.

A third motion, from Supes Solis and Hahn directs the county health departments to hire an outside consultant to identify the range of community-based placements and beds that would be needed to achieve a truly “decentralized continuum of clinical, trauma-informed care facilities operated by health personnel,” how much that system would cost, and what funding sources exist, including the McCarthy money. The motion also directs the health departments to coordinate a report on how the county could demolish Men’s Central Jail by reducing, or eliminating entirely, the need for jail beds to replace those that would be lost (via diversion and other strategies).

This last point is the goal that Reform LA Jails is fighting to bring to fruition.

On Thursday, August 8, the jail reform coalition rallied downtown and threatened to bring a lawsuit over the contract and the county’s alleged failure to engage in a competitive bidding process when the job was originally assigned.

For months now, advocates and community members affected by the criminal justice system have shown up to the supervisors’ weekly meetings, urging the board to back out of the McCarthy plan and invest the $2.2 billion in services in the community, rather than in incarceration.

“The goal should be to scale up effective culturally competent mental health and substance use models that are community-based,” Pattrisse Cullors said during last week’s rally.

The supervisors, to their credit, do appear to be really trying to get this jail replacement right.

The plan, Ridley-Thomas said, should “build on the successes of the County’s psychiatric urgent care centers, mental evaluation teams, the sobering center – all created within the last few years; the Office of the Diversion and Reentry, whose work is being scaled up; and the MLK Behavioral Health Center, which will open in 2020.”

The county is “only beginning to realize all the benefits of those investments and still have much to learn,” said the supervisor.

The board must “take the time to do this right,” said Ridley-Thomas.

LA County’s criminal justice system should be an accountable system “that guarantees public safety, diverts the mentally ill to treatment when appropriate, and holds people liable for breaking the law while providing humane treatment and rehabilitative services intended to prevent recidivism,” the supervisor added.