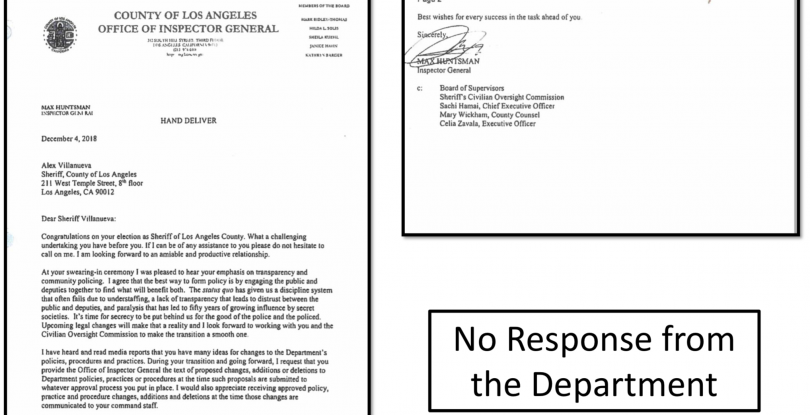 At just around 5:30 p.m. on Tuesday, January 21, 2020, the LA County Supervisors voted to give subpoena power to the Civilian Oversight Commission for the Los Angeles County Sheriff’s Department, via the county’s Inspector General, which is the COC’s investigative arm.

Since this greater authority requires the amendment of a county ordinance, the decision will be voted on one more time, most likely at next week’s board meeting. Then,  30 days after vote two, subpoena power for the OIG will go live.

For a number of years, the board was against giving this authority to any of the various oversight bodies it has created.

But given the power struggles that have occurred this year between the sheriff and the board—and also between the LASD and the combined oversight entities of the COC and Inspector General Max Huntsman—on Tuesday afternoon, all five board members appeared to feel the time had arrived for a new tool to be added to the oversight toolbox.

“The county has made great strides in attempting to reform the sheriff’s department over the years,” said Supervisor Mark Ridley-Thomas who together with Supervisor Sheila Kuehl co-authored the motion to create the needed amendment to the county ordinance governing the COC.  But the oversight bodies “need access to relevant information,” he said, “and the recent lack of access to sheriff’s department documents has impeded their ability to perform their core function.”

A series of tense exchanges between sheriff’s department representatives and Inspector General Huntsman at last Thursday’s COC meeting – followed by an angry post-meeting letter from Sheriff Villanueva – seemed to make the case that the time for subpoena power had indeed arrived.

Also, since the board already voted to give this same power to the soon-to-be-launched Probation Oversight Commission, giving the power to compel the COC was expected.

In making the decision,  the department’s past relationships with oversight have cast a shadow.

When on September 28, 2012, the Citizen’s Commission for Jail Violence presented their lengthy and meticulously researched report on problems in the LASD that had resulted in violence and corruption in the nation’s largest jail system, the CCJV’s most prominent suggestion for reform was the creation of an independent “oversight entity,” with “unfettered access” to “department records, witness interviews, video footage, data, personnel, and facilities.”

At the time, there were already a number of oversight bodies monitoring the LA sheriffs, but they had no real power to affect wrongdoing in the department, which had metastasized to the point that over the next five years, more than 21 LASD members, including the sheriff and undersheriff, would be indicted by a federal grand jury, convicted, then sentenced to federal prison.

In response to the CCJV’s report, the LA County Board of Supervisors approved the necessary county ordinances to create a new oversight system in the form of the Office of the Inspector General in 2014.  Two years later, the board further approved the county code necessary for the creation of a Civilian Oversight Commission (COC).

Yet, the board stopped short of giving the new commission subpoena power.

Instead, in December 2015, the board approved a Memorandum of Agreement that outlined exactly what kind of information from the LA County Sheriff’s Department that the new commission and the inspector general as its investigative arm, would be entitled to have.

Sheriff Jim McDonnell, whose representatives had participated in the creation of the MOA, signed the document without a problem.

During McDonnell’s years in office,  compliance with the MOA was not perfect, according to IG Huntsman, but it improved over time.

Yet, when Sheriff Alex Villanueva was sworn in early December 2018, for whatever reason, a new memorandum of understanding was never signed.

Of course, Villanueva could have simply followed the existing MOA.

But, according to the OIG, that’s not what happened—although the sheriff’s department claims otherwise.

At last Thursday’s meeting of the COC, IG Huntsman gave commission members a detailed description of how the past year has gone when it came to an exchange of information and cooperation between the sheriff and the LASD’s two oversight bodies.

Huntsman’s presentation – which included a visual show-and-tell that featured photos of various email exchanges throughout the year – was unsettling.

“When the sheriff was elected, I sent a letter making some requests,” he told the COC.

That first letter (pictured above) was nothing out of the ordinary, according to Huntsman. In it, the IG congratulated the new sheriff and requested information that pertained to some policy changes Villanueva had suggested he intended to enact.  This shouldn’t have been a big deal in that it was the kind of thing that the IG had been hired to examine and track, and that his office had already been doing with McDonnell, said the IG.

Huntsman also asked briefly about Villanueva’s proposed Truth and Reconciliation Committee, which the new sheriff had announced would be formed to review cases of unfairly terminated deputies.

Again, the idea of wrongly-fired department members was something that appropriately fell into the IG’s oversight basket.  Thus, Huntsman wanted to know who was on the committee that would be examining these bad firings. And could he have a schedule of meetings, he asked, so that someone from the OIG might attend?

“It was completely ignored,” Huntsman told the COC.  “That was an abrogation of the [previous] MOA.”

The alleged repeated lack of response also appeared to be out of compliance with the county code creating the oversight bodies, which stipulates that all employees of the county were to “cooperate with the Commission and, to the extent permitted by law, promptly supply copies of requested documents and records, so that other public officer and the Commission can full and properly perform their respective duties.”

According to Huntsman’s report, the pattern of stonewalling by the sheriff and the LASD continued throughout Villanueva’s first calendar year.

In May, for example, said Huntsman, he asked for information about changes in hiring standards – namely hiring packets – explaining that he’d been monitoring hiring since 2015, and would like to continue. After that, he requested information about the new June class of deputies.

In each case, he was reportedly either turned down for perplexing reasons or just ignored, according to the IG.

In March, when the OIG sent a list of fact-finding questions pertaining to the rehiring of Caren (Carl) Mandoyan, there was reportedly no response at all.

Nevertheless, in July of last year, the OIG released its own extensively researched report on Mandoyan and the Truth and Reconciliation process, although the sheriff had reportedly warned him not to.

Shortly thereafter, the undersheriff announced that the department had launched a criminal investigation into the actions of Huntsman, claiming he and his office had wrongly accessed LASD personnel files, nevermind that the OIG  had been given the files in question by the previous sheriff.

According to Huntsman’s report last Thursday, the criminal investigation has thus far not been withdrawn, nor has it been handed off to another agency, as would be proper due to the department’s obvious conflict of interest in criminally investigating one of their two oversight entities.

The inspector general told of additional investigative requests and refusals in the course of his presentation, concluding that “the change from two years ago [during McDonnell’s term] to now, in terms of communication, is drastic.”

Initially, Sheriff Villanueva was reportedly going to attend the portion of Tuesday’s Board of Supervisors meeting during the segment pertaining to subpoena power. As it turned out, however, Assistant Sheriff Steve Gross came in his place and told the board why he and the sheriff didn’t really think this potential new legal tool was necessary.

“We feel we have been overwhelmingly in compliance with the county code,” said Gross. As for the Memorandum of Agreement, as of a week ago, the department had been “trying to comply with the existing MOA up to this point.”

If subpoena power was granted, Gross suggested, in would only lead to problems.  “We feel that increased OIG power and influence can lead to harm and additional legal actions.”   Instead, he said, they believed that “voluntary compliance was “best for both the sheriff’s department and the county.”

Late last week, Sheriff Villanueva presented his point of view more directly  in the form of a letter, dated January 17, the day after the COC meeting.

In the 3-plus page letter addressed to Brian K. Williams, the COC’s executive director, the sheriff expressed great distress because of what he described as the COC’s failure to “admonish the OIG in any way during its presentations in which the only goal appears to be to make the COC a forum to slander the LASD and its personnel.”

(You can read the letter here.)

The OIG, he continued, “consistently misstates facts…exaggerates,” and “presents untruths as facts.”

As for subpoena power, Villanueva wrote, the OIG “threatens to use it at every corner, despite the LASD offer to work together…”

Overall, according to Sheriff Villanueva, “the atmosphere at the COC has deteriorated to the point that an LASD panel member becomes an object of ridicule and attack from the OIG,” the “COC,” and  a “small group of community activists.”

Thus, from now, concluded the sheriff,  he will be sending none of his command staff to the meetings— unless for a specific presentation that has been agreed upon well in an advance.

Instead, he intends to have County Counsel represent the department at future meetings “to respond to the OIG’s legal commentary…”