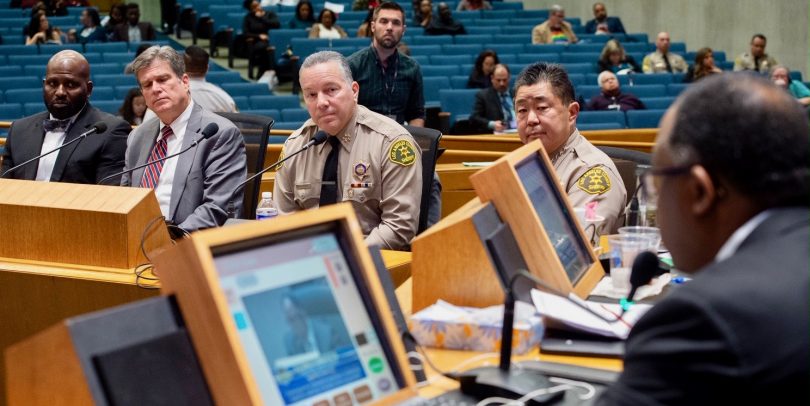 The civilian bodies overseeing the Los Angeles County Sheriff’s Department and LA County Probation will each have the ability to subpoena documents or compel testimony.

After an occasionally fractious discussion on Tuesday, January 28, the LA County Board of Supervisors approved the necessary amended county statutes by a unanimous vote.

In the case of the Civilian Oversight Commission (COC), which oversees the sheriff’s department, that new legal tool will go live thirty days from Tuesday.

The Probation Oversight Commission (POC) is still in the process of getting up and running. Yet, the board’s vote means that when the POC is finally fully created and ready to begin its work, it will have subpoena power in its tool chest.

At Tuesday’s meeting, however, the focus was primarily and understandably on the COC and the LASD. 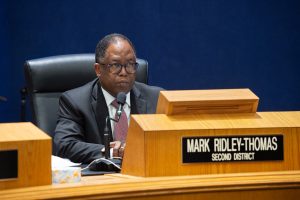 “The county has made great strides in reforming the Sheriff’s Department, through the work of the Citizen’s Commission on Jail Violence, the Inspector General, and the Civilian Oversight Commission,” Supervisor Mark Ridley Thomas told WitnessLA after the vote via email. “But oversight is impeded without the ability to shine sunlight.”

Ridley-Thomas was the co-author together with Supervisor Sheila Kuehl, of the motion that set in motion Tuesday’s vote to give subpoena power to the COC. Supervisor Hilda Solis joined him in co-authoring the October motion that led to making it possible for probation oversight to have the same power.

“The Board has been thoughtful and deliberate about how to best remedy this and ensure greater, and more timely, access to information,” he said. “I hope the Sheriff – who represents a county department and is part of the county family – embraces the type of transparency we need.”

Attorney Brian Williams, who is the executive director for COC, was one of those whom the board asked to speak about why subpoena power was called for.

“Truth never damages a cause that is just,” Williams said, opening with a quote from Mahatma Gandhi. And the COC’s just cause “is comprehensive and fair oversight on the sheriff’s department.”

Williams made the point that the COC doesn’t intend to overuse the new tool. “Subpoena power is not a weapon,” he said. “It’s a tool for justice — for the commission, for the community, and for all involved.” 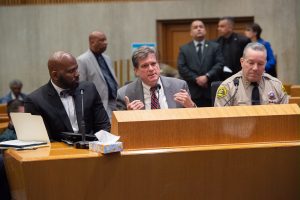 Loyola Law Professor Sean Kennedy, the former head federal public defender for the Central District, who is also a member of the COC, described subpoena power as “one of the most important parts of any professional investigation.”

Yet when subpoena power is talked about, he said, “it is often framed as a negative issue. A power struggle. A way to weaponize a position or to browbeat the sheriff.”

All kinds of institutions “have to investigate things,” said Kennedy. In doing so, one starts by trying to “solicit cooperation and build relationships” to get the information you need.

But if that doesn’t work, you need to compel information.

“But without it, there are so many times I fear our goal degenerates into oversight theater.”

Not in the business of secrecy

Last week, when the board went through the first round of approvals necessary to amend the relevant county statutes, Sheriff Alex Villanueva did not attend the meeting.

It may not have helped that last week’s board meeting was held in the wake of an unusually quarrel-filled COC meeting the Thursday before, which featured a series of tense exchanges between sheriff’s department representatives and Inspector General Huntsman, and was followed the next day, by an angry post-meeting letter from Sheriff Villanueva.

This time, however, the sheriff did attend and spoke at length about the department’s goals for transparency, and where he stands in relationship to Tuesday’s vote. 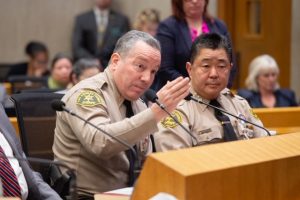 He had released as much information publically as he was able, Villanueva told the board. “The question is, what is left that the people are going to seek a subpoena for? There is nothing left.” He was already being as transparent as was possible, he said.

In fact, said the sheriff, the department had even started the process of putting every request from the Office of the Inspector General online.

“We’re not in the business of secrecy as some people like to believe, erroneously.”

According to Villanueva, the OIG only generated seven reports in the entire calendar year of 2017. In 2018, the OIG generated ten reports. Whereas in 2019, Villanueva’s first year in office, the inspector general generated 21 reports.

The point, he said, was that the OIG and the COC “have been receiving reams and reams of data from the department,” and had no need for subpoenas.

The power of the court

When it was Supervisor Sheila Kuehl’s turn to speak she said that the point of subpoena power was about a neutral body, namely the courts, having the last word.

“The sheriff has appropriately indicated he can resist a subpoena,” Kuehl said, adding that the board hoped that the new power wouldn’t be used all that much. Ideally, it wouldn’t need to be, because they would be “getting cooperation.”

Nevertheless, Kuehl said, “we have heard from our inspector general that there have been a number of incidents where he has felt that he has not received the information he needs to do the job we have asked him to do.”

So, when there’s a disagreement about who should have what, “this is where the court can come in,” she said.

Sean Kennedy followed in the same vein, pointing to the value of the court as the impartial arbiter when he was asked to chime in again.

“Real oversight is going to involve respectful disagreements,” he said. “Subpoena power allows us to depersonalize those conflicts and have a neutral and detached magistrate consider the good faith arguments of both sides when you have a standoff over information.”

Kennedy is arguably the COC’s main point person when it comes to looking into the issue of deputy gangs, so he mentioned his struggles in that regard as an example of when a subpoena would have been useful.

For the past few years, he said, he’d “pursued information” about what efforts LASD management had made to address the deputy cliques.  But he didn’t get “any information” in return.

But if the COC was able to issue a subpoena, matters would be different.  “The sheriff’s department, if they thought [the subpoena] violated confidentiality could tender its legal arguments, and the COC could make its legal arguments. And then – as Supervisor Kuehl said – the court would decide one way or the other.”

On Tuesday, most of the discussion, and the disagreements regarding the motions pertaining to subpoena power, had to do with the COC and the sheriff’s department.

The POC, which is on the edge of finally being formed, is not drawing much fire at the moment. Probation Chief Terri McDonald has just retired. And, Interim Probation Chief Ray Levya seems to be wisely spending his time getting the lay of the land.

Nevertheless, Cyn Yamashiro had some things to add when he was asked to speak.  Yamashiro is the Directing Attorney for the county’s Independent Juvenile Defender Program, a member of the PRIT, the temporary body that devised the plan for the formation of the new POC, and a member of the existing probation commission.

First, he reminded the board it was worth remembering that the POC will be the first probation oversight body in the U.S., thus it can serve as a national model.

And second, he emphasized that, while having subpoena power was important, sometimes the pressing problems at the probation department aren’t the sort of issues that require the involvement of the Office of the Inspector General.

He told of an experience he had around Christmas, when he started hearing from various juvenile attorneys that their clients at the county’s two juvenile halls — Central Juvenile Hall and Barry J. Nidorf Juvenile Hall — needed blankets because “they were freezing.”

In this case, Yamashiro and the attorneys in his firm were able to gather around 80 blankets and bring them to the kids.  (He told WLA later, that the group also gathered and brought a bunch of books to the kids, which was also an excellent idea.)

“But that’s the kind of thing that community engagement and the independent review process has the ability to discover” and then bring to the probation department in an official capacity, he said.

This is why the POC needed adequate staffing, he added.

When Yamashiro finished, Supervisor Kathryn Barger, who is the board’s chair, thanked him then, after a pause, blurted how appalled she was by his story.

“The fact that probation didn’t have blankets for the kids … Shame on us!”

And sometime after that, the board cast its unanimous vote.