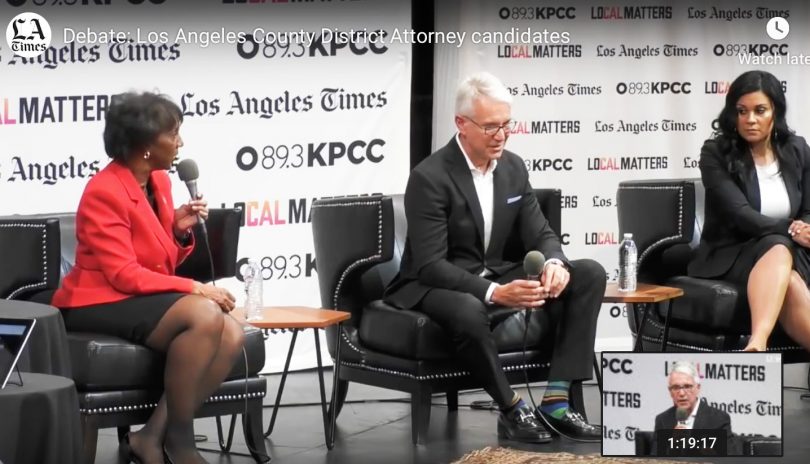 We are just slightly over three weeks away from the primary election for what continues to be described as the most significant district attorney’s race in the nation.

In the past week, the competition to lead the nation’s largest DA’s office has heated up to a scorching level, featuring flying accusations, some questionable big bucks donations, and at least one impressively creepy attack ad.

This is the contest in which two-term Los Angeles County DA Jackie Lacey, 62, the first woman and the first African American to hold the position, is facing two serious opponents, each of whom says that they intend to use the office to take LA County much farther down the road of justice reform than Lacey seems to be willing to go.

As most readers know, the first of Lacey’s two challengers is former San Francisco District Attorney, George Gascón, 65, who in addition to his 8 years as SF DA, spent 27 years in the Los Angeles Police Department, winding up as 1st Assistant Chief, under William Bratton, then moving on to become the Chief of Mesa, AZ’s PD, followed by an appointment as Chief of Police for San Francisco’s department. He is also well-known for being the co-author of Prop 47, which reduced punishments for certain nonviolent crimes.

Lacey’s other challenger is public defender Rachel Rossi 37, who, while less well known than Gascón, has represented clients in the LA Public Defender’s office, the Alternate Public Defender’s Office, and as an Assistant Federal Public Defender for the Central District of California. After her years of courtroom experience, Rossi took her legal skills to Washington D.C., where she worked on criminal justice policy on the House and Senate sides of Congress, an experience that she says gave her a valuable big picture view of justice reform on a national level.

Since Gascón and Rossi announced their candidacies in October and November respectively, they have each characterized the race as a referendum on whether or not Los Angeles County will get the justice reform both candidates say it very much needs.

The fact that the knives were truly coming out in the race was evident on January 29, which was the first time the candidates were on the same stage for a debate. That night, the two challengers tossed sharp-pointed accusations at Lacey, and Lacey shot back furiously at Gascón and Rossi, most particularly at Gascón.

Rossi tweeted the following day that Lacey announced during the debate that she — Rossi — wasn’t a “real lawyer,” a statement that quickly ignited the ire of public defenders on twitter.

A few days later still, Lacey semi-apologized to Rossi in a letter to the editor in the Daily Journal.

(If you’ve not seen the debate, which was sponsored by KPCC and the LA Times, it’s very much worth watching, including the yelling audience members, one of whom advanced toward the stage in his state of upset at Lacey. The man turned out to be Greg Akili, an organizer with Black Lives Matter.*

Then, on Friday, February 7, the Los Angeles Police Protective League (LAPPL) — the LAPD’s union — hit a very different level of hostility when it released a surprisingly malicious attack ad against Gascón, that is somewhat reminiscent in tone to the infamous Willy Horton ad that George H. Bush used in his race with Mike Dukakis.

Yet, in the case of the LAPPL’s offering, the content of the ad (see below), which depicts Gascón as a rumpled and sleazy white guy (although Gascón was born in Cuba), interestingly appears to be aimed, not at law-and-order voters, but at LA progressives, hoping to peel them away from the former SF DA, who has been characterized as the most reform-minded prosecutor in the U.S.

That same morning, the Los Angeles Daily News announced they were endorsing Gascón.

(This means that the Pasadena Star-News and the Long Beach Press-Telegram has also endorsed the former SF DA.)

In explaining their choice, the Daily News editorial board wrote, among other things, that Lacey had “opposed reforms backed by majorities” of Los Angeles County voters, “including Prop. 47, but also Proposition 57, and measures legalizing marijuana and ending the death penalty,”

Gascón, on the other hand, “has vowed to prioritize and use data to focus on violent and repeat offenders, while pursuing alternatives to incarceration when it makes sense to do so,” wrote the board. “With L.A. County’s justice system full of people with mental health and substance-abuse problems, it’s time to try something new.”

Lacey has her own extensive list of endorsements, which includes the LA Sentinel, which arrived in mid-January, and a great many high-profile political names such as LA Mayor Eric Garcetti, four out of five of the members of the LA County Board of Supervisors, Congressman Ted Lieu, and Congressman Adam Schiff, among lots of others.

Yet, Gascón’s list appears to be increasing in size. Now, in addition to the much-coveted endorsement by the L.A. County Democratic Party, he’s gotten nods from a growing number of Democratic voter clubs. And, as Sheriff Alex Villanueva demonstrated with his 2018 underdog campaign, members of local voter clubs tend to, you know, vote, and then they drag all their friends to the polls as well.

Rossi, too, has an endorsement list that has been growing. It includes the Black LA Young Democrats, the Latino Coalition of Los Angeles, the Los Angeles African American Women’s Political Action Committee (LAAAWPAC), the Baptist Ministers Conference of Southern California, and more.*

Donations — the good, and the not so good

Since the race began, according to public records, Jackie Lacey has appeared to be bringing in the biggest piles of bucks in donations, with much of the money coming from law enforcement organizations.

For example, in mid-January, the LAPD’s rank-and-file union (LAPPL) mentioned above, put up $1 million, separated into two separate donations, both of which were designated for an anti-Gascón political action committee, with the aforementioned TV commercial evidently marking the beginning of the union’s new attack dog strategy.

The Association for Los Angeles Deputy Sheriffs, ALADS, has given at least $50,000 to her campaign. And the politically active Peace Officers Research Association of California — PORAC — has given $100,000.

The notoriously anti-reform Association for Deputy District Attorneys (ADDA) came in with their own donation of around $94,000, and has also been active in sending out aggressively anti-Gascón emails.

The above donations are not at all surprising since Lacey, the protege of her predecessor, Steve Cooley, generally gets along well with the police. Yet, in that she and her office have repeatedly been criticized for not holding law enforcement to the same legal standards as everyone else — even when then Chief of Los Angeles Police Charlie Beck asked for an officer to be charged in the killing of Brendon Glenn near the Venice boardwalk, for example, and when former LASD deputy Giancarlo Scotti got a softball plea deal after he was credibly accused of sexual assault by at least eight different women who had, at the time, been locked up in the county’s women’s jail, where Scotti then worked as a guard.

With these and similar issues in mind, rightly or wrongly, opponents claim that high ticket donations from these particular quarters could carry with them a sub rosa quid pro quo.

Last spring, the LA Times wrote about other conflicts-of-interest in Lacey’s donations and fund-raising, pointing to a murder suspect’s parents who made donations, and other questionable fiscal supporters, such as “a felon from Sun Valley convicted of trying to smuggle missile parts to Iran,” according to the Times. After LA Times reporters inquired about the problematic donations, Lacey’s campaign reportedly returned a bunch of them.

But then this past December, a defense attorney named Mark Werksman hosted a $1,500 a seat fundraiser for Lacey, a situation that also appears to be drenched in conflicts of interest, since Werksman is defending a client that Lacey’s office is prosecuting. Furthermore, it turns out that the client is somehow tangentially involved in a labyrinthine and disturbing whistleblower case inside the DA’s office.

In any case, the point is that parts of Lacey’s donation situation still appear to need some rigorous dry cleaning.

On Gascón’s side of the race, while thus far, Lacey has been the clear leader when it comes to fundraising, that imbalance is starting to change.

On February 5, musician and justice advocate John Legend headlined a well-attended fundraiser for Gascón at the Warwick nightclub in Hollywood, where he gave Gascón a strong endorsement.

Two days before, on February 3, an unusual alliance of labor and community organizing groups announced that they were pledging $1 million to launch “an all-out, million-plus dollar voter engagement program to help elect George Gascón as the County’s new District Attorney.”

The alliance is made up of SEIU Local 99, the education workers union, LA Voice Action, which does interfaith organizing, the Community Coalition Action Fund, a social justice and community organizing group based in South LA, the civil rights organizing group, Color of Change, and the California Donor Table & Open Philanthropy Project, all of which together represent 100,000 LA County residents, according to the organizers.

“We’re going to be out in droves knocking on doors, calling folks, going boots-on-the-ground style to spread the word about the power of the district attorney and why George Gascón is the person for the job,” said Max Arias, Executive Director of SEIU Local 99. “The stakes can’t be underestimated, and we can’t leave any efforts on the table in electing George Gascón as the new District Attorney.”

The game, in other words, is now on in all quarters of the race.

So far, Jackie Lacey has appeared only at the LA Times/KPCC debate that we’ve linked to above, although there have been at least two other such events.

The ACLU hosted a debate in mid-December, which Lacey declined, saying she had a scheduling conflict. And, on Saturday, February 1, a few days after the January 29 debate that featured all the candidates, the three were invited to participate in an unusual town hall meeting-style debate inside Lancaster State Prison.

Rachel Rossi and George Gascon both attended, while Jackie Lacey “politely declined,” according to the event’s organizers. (It is not clear if she had a conflict or other reasons for skipping the event.)

Yet, for a race in which each candidate is claiming to be the most capable of leading the county toward justice reform, the town hall, which allowed men who were locked up to ask questions, and to tell the candidates what they thought was important, was sponsored by the Anti-Recidivism Coalition (ARC), attended by other well-respected justice reform advocates, and moderated by Spectrum Media’s Alex Cohen, might have been a good campaign stop to put on one’s calendar.

As of now, there is at least one more debate scheduled that will allow voters to see the candidates answer questions spontaneously and in person before voting day.

At first, Lacey said she would attend the debate, which will take place on the evening of February 13, and is organized by the nonpartisan LA City and LA County chapters of the League of Women Voters.

The forum will be held at the offices of the National Council of Jewish Women, on 543 N. Fairfax Ave., and will be co-hosted by a coalition of additional organizations, such as the So Cal ACLU, and Loyola Law School’s Center for Juvenile Law & Policy.

Lacey, who originally was going to attend, has reportedly dropped out of the event.

We hope she changes her mind.

This might also be a good time to remember that former LA County Sheriff Jim McDonnell blew off nearly all of the candidate debates during his 2018 re-election campaign.

After the race was over, post-election analysts told WitnessLA that they believed the choice to stay away sent voters the wrong message.

It turns out that Rachel Rossi does have a Donations page. When we first checked her site, some days ago, we didn’t see it. But it’s up now.

Also, we misidentified the man at the January 29 candidates’ debate who rushed the stage. We have now identified him correctly.