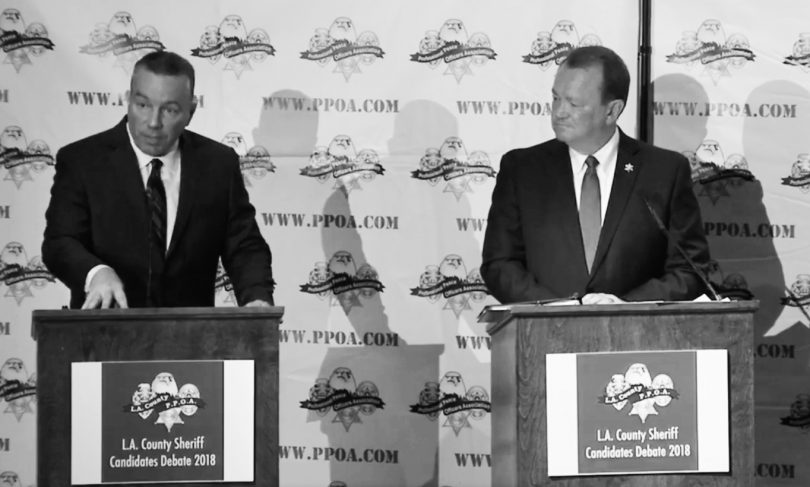 On Thursday, the Association of Deputy District Attorneys announced that its board of directors had voted to endorse incumbent Jim McDonnell in the race for Sheriff of Los Angeles County.

“Jim McDonnell is a respected partner and is helping keep Los Angeles County neighborhoods safe,” Michele Hanisee, President of the Association said in a statement that accompanied the announcement.

“We believe that Sheriff Jim McDonnell has the requisite experience, energy, and commitment to continue to lead one of the nation’s largest and most complicated law enforcement agencies through these particularly difficult times,” she added.

The announcement came a week after McDonnell had received the endorsement of Los Angeles County Professional Peace Officers Association or PPOA, the union representing the LA County Sheriff’s Department’s supervisors. As we reported earlier, the PPOA endorsement is expected to be accompanied by a healthy campaign contribution.

On Monday of this week, McDonnell’s energetic challenger, Alex Villanueva, received an endorsement from the LA County Federation of Labor, which represents 300 LA unions, and approximately 800,000 union members. The County Fed puts out its own voter guild.  How much its members will follow its individual endorsements is not clear. But, in general, when the organization’s leadership decides it wants to go beyond an endorsement to really go to bat for a cause or a candidate, they are able to turn out formidable numbers.

Villanueva also has been endorsed by the SEIU United Service Workers West, which represents more than 40,000 janitors, security officers, airport service workers, and other property service workers across California.

As in the primary election,  when incumbent Jim McDonnell got 47.87 percent of the vote, and challenger Alex Villanueva surprised most everyone by getting 33.20 percent,  Villanueva has been focusing on getting the support democratic clubs and organizations all over the county. According to his website, in addition to the Los Angeles County Democratic Party, Villanueva has the support of approximately 35 other democratic clubs, some of which are very active with get-out-the-vote calls.

Villanueva’s Twitter and Instagram feeds show him appearing at gathering after gathering for many of the regional clubs, some quite small in size, others a lot larger.

“Alex is one of us,” wrote ALADS president, Ron Hernandez in a much lengthier statement. “He has over three decades of experience as a deputy, has served in the United States Air Force and the California Army National Guard, and earned a Doctorate in Public Administration while studying the impact of diversity on law enforcement leadership. He has been a tireless advocate for deputies, especially during moments in the department’s history when it was necessary to speak truth to those in power.”

McDonnell has far and away the longest list of elected officials, including Mayor Eric Garretti, District Attorney Jackie Lacey, and four out of the five LA County Supervisors, among many others. (Thus far, Supervisor Mark Ridley-Thomas does not appear to be McDonnell’s endorsement list.)

Last Saturday, Sheriff McDonnell caused a stir when, after initially agreeing to participate in a debate sponsored by the Southern California ACLU, KPCC, and others,  he then pulled out a few days before the event was to take place.

According to the LA Times’ Maya Lau, who attended the one-candidate debate, McDonnell’s campaign manager, Steve Barkan, sent a statement saying the sheriff will not appear at events alongside “a candidate who routinely makes false statements about the department, its policies and the sheriff himself.”

Villanueva, who was interviewed on Saturday night by KPCC’s Frank Stoltze, appeared beside an empty chair that featured a photo of the McDonnell, with a giant red MISSING stamp over the current sheriff’s image.

Thus far, the only time the two candidates have sparred face to face was at the July 23rd debate organized by PPOA that is pictured above.

In the last two days, much of Sheriff McDonnell’s time has been taken up by the shootout involving deputies that took place Wednesday evening at Salazar Park in East Los Angeles.  The incident, which occurred after a call regarding an assault with a deadly weapon came into the East Los Angeles Sheriff’s Station. Three patrol vehicles responded and, during an exchange of gunfire with suspects, two deputies were shot and seriously injured.  A suspect was killed, and another was injured.

One deputy was shot in the upper chest area and was subsequently released from the hospital.

The second deputy was shot in the jaw, and was listed in serious, but stable condition, but now is reportedly “doing better.”

Both of the injured deputies were described as experienced veterans with at least ten years on the job.