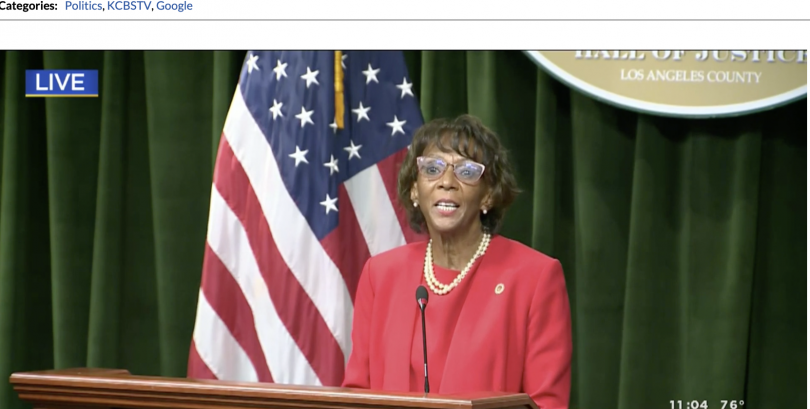 After an an intense and closely watched contest, Los Angeles District Attorney Jackie Lacey has conceded to challenger George Gascón who will now lead the largest prosecutor’s office in the nation.

“I congratulate George Gascon and his team on their expected victory,” said Lacey to reporters in an in-person press conference midmorning on Friday.  Although there was upward of 80,000 ballots still to count, she explained, her consultants told her that the numbers realistically no longer favored her.

(Gascón has 54 percent of the vote to Lacey’s 46 percent, with 2.8 million votes counted.)

Lacey thanked God, her colleagues, her team, her family and, most emotionally, her mother, “who constantly asked me, ‘Are you okay?‘ And who reminded me through this contentious fight,” no matter what, “I made history.”

As the first woman to lead the county’s district attorney’s office and the first Black LA District Attorney, Lacey’s history-making is indisputable.

Gascón has not yet responded to Lacey’s concession, but has scheduled a virtual press conference for 1 p.m. Friday where he will make “an announcement.”

George Gascón grew up in Los Angeles after his family immigrated from Cuba. An army veteran, Gascón served as a Los Angeles Police Department Officer for nearly 30 years, rising to the rank of Assistant Chief of Operations. In 2006 he became Chief of Police in Mesa, Arizona, where he tangled famously with Maricopa County Sheriff Joe Arpaio.

In 2009, then-San Francisco Mayor Gavin Newsom appointed Gascón as SF’s Chief of Police. Newsom turned to Gascón again in 2011 to tap him to be San Francisco’s District Attorney, filling the seat vacated by an outgoing Kamala Harris who had been elected Attorney General.

“Former San Francisco DA @GeorgeGascon will be assuming office – and ushering in a wave of #21stCenturyProsecution thinking,” former federal prosecutor Miriam Krinsky, executive director of Fair & Just Prosecution, said in a Tweet after the news of Lacey’s concession broke.