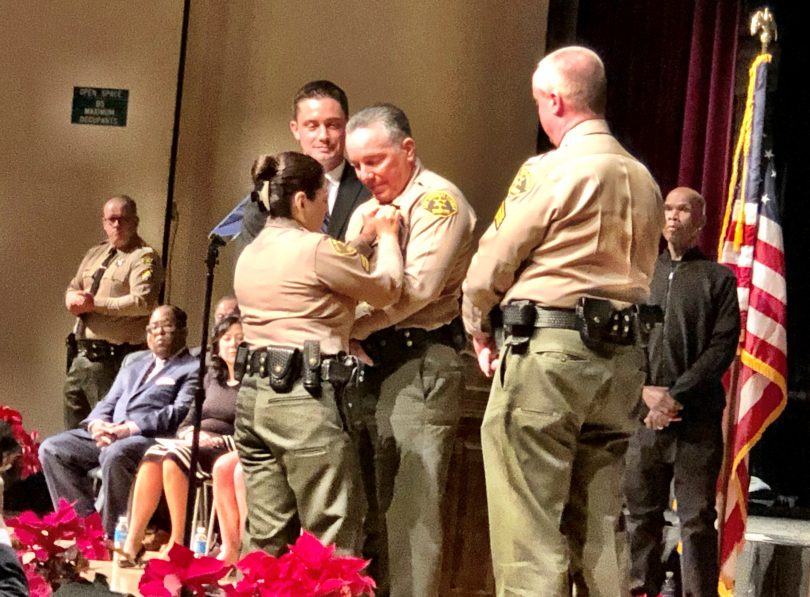 “This entire county is at a crossroad,” said newly elected Los Angeles County Sheriff Alex Villanueva after he was sworn in at midday on Monday, December 3.

“The people of Los Angeles County have decided they want a new vision for law enforcement in our communities.”

So it seems.  During what turned out to be a very savvy campaign, the long-shot candidate with no previous name recognition—and, in the beginning at least, very little money—persuaded enough voters that he had exactly the vision that the nation’s largest sheriff’s department now needed, and in so doing became the first person in more than a century to challenge a sitting LA County Sheriff, and win.

He was sworn in a week after the election was called.

When planning his public swearing-in ceremony, Villanueva, 55, didn’t choose the usual kind of formal county venue. Four years ago, for example, Sheriff Jim McDonnell was sworn in at the downtown Hall of Administration. Other official celebrations are often held at the county’s 1925 Hall of Justice, which reopened in 2014 after a long renovation.

Instead, using the event as a symbol of the new perspective he hopes to embody, the new sheriff chose the decidedly un-formal auditorium at East Los Angeles College in Monterey Park.

And for his opening musical act, he chose the Garfield High School marching band, which featured a lot of very enthusiastic young local horn players, and two tubas.

The nationally syndicated So Cal radio host, Big Boy, whose given name is Kurt Alexander, was the M.C. of the event, which felt more like a community party than a stately gathering of county higher-ups. Many of the event’s symbolic references pointed to East LA, and other communities on the east side of LA County, where Villanueva, with his Puerto Rican/Polish heritage, feels a strong connection.  Yet, the mood that the event created seemed designed to stand in for a celebration of all of LA County’s communities, particularly those that tend to feel the most at odds with local law enforcement.

“I am proud to share the stage with someone who had the courage to challenge the status quo,” de Leon told the crowd. “He will take the law enforcement playbook that doesn’t work and replace it.”

The many faces of reform

Throughout his speech Monday, Villanueva expanded on de Leon’s point, talking about the “challenge of reform,” his tone that of a football coach revving up his team before the game.

“If I say we’re going to reform this department, you should believe me!” Villanueva exhorted the crowd. He and his administration were going to “make changes to the culture of the department,” he said.

It was a promise Villanueva, 55,  made all throughout his dark horse campaign, as he  asked voters across the county—a large portion of them distinctly progressive-leaning voters—to take a chance on him, a retired LASD lieutenant with 32 years in the department, rather than the known quantity of incumbent sheriff Jim McDonnell, who had headed, or been second in command of a total of three police agencies, including the LASD.

Yet, McDonnell—Villanueva told audience after audience during the campaign—failed to cleanse the department of those who participated in what a federal judge called in a “culture of lawlessness” that former undersheriff Paul Tanaka,” and his boss, former sheriff Lee Baca, had “allowed to fester.”

(Tanaka is now serving a five-year sentence in a federal prison, while Baca’s three-year prison sentence is still on appeal.)

“We are going to go back to being peace officers…” Villanueva told Monday’s crowd, then repeated the message in a tweet on Tuesday, adding that he and the 18,000 person agency he now leads will be “judged by how well we protect our communities.”

At the swearing-in, he also made a point of reaching out to immigrant residents who, he said, “shouldn’t have to worry about” whether the department will  “protect” or “deport” them.

A bad case of the jitters

Villanueva’s inclusive message was greeted by visible enthusiasm among many of those in the college auditorium on Monday.

Yet, ever since he was officially declared the winner a week ago, beating Jim McDonnell by 125,878 votes, the new sheriff’s lightning strike victory was greeted by reactions that ranged from giddy expressions of  happiness and hope among his most ardent supporters, many of them among the department’s rank and file, to declarations of serious “concern” among other county stakeholders.

For instance, there was the suggestion that Villanueva might reissue the heavy flashlights that deputies working in the county’s jail system once used, but that were prohibited in the fall of 2012 and replaced by small, tactical flashlights, after several civil lawsuits, ACLU reports, and the scathing report by Citizen’s Commission on Jail Violence, indicated that the larger lights were too often used in “force incidents” as “impact weapons.”

Similarly, Villanueva’s off-with-their heads-style termination of the majority of Jim McDonnell’s command staff, including his two constitutional policing advisors, Diana Teran and Sergio Perez, both of whom will move to the office of Inspector General Max Huntsman, is being viewed as troubling.

It is not that anyone denies Villanueva the right to bring in his own people. It is the suggestion that the civilian constitutional advisors, which have become a crucial best practices feature of most of the nation’s largest law enforcement agencies, would not be replaced, or would be replaced in a weaker form, that is calling red flags to be raised.

“We have been getting a lot of cooperation from the department’s leadership under McDonnell,” Patti Giggans, chair of the Civilian Oversight Commission (COC), told WitnessLA on Sunday night. “We hope this will continue with whoever is going to be there now,” she said. “But we don’t know who’s going to be there. And so there’s some anxiety.”

Her worry was echoed by others who expressed the hope that the existing trend toward reform will not be, in any way, derailed.

The shadow of ink

The question of who will be on Villanueva’s command staff list has been a focus for many of the rank and file, along with department retirees, as well as for the county’s progressive leaders.

Thus far, Villanueva’s top picks have largely been greeted with enthusiasm and relief. This includes retired LASD commander Ray Leyva, who is the new sheriff’s pick as his second in command, the undersheriff.

When Villanueva announced the rest of his top-level command staff on Monday, perhaps the loudest applause went retired commander Robert Olmsted, who will be Villanueva’s assistant sheriff in charge of custody. Tim Murakami, who will be jumping from the position of Captain of the department’s Industry station, to assistant sheriff over patrol, is another who is widely well regarded.

The appointment of Chief Maria Gutierrez as the third assistant chief, making her the department’s highest-ranking woman, has also been greeted with lots of enthusiasm.

Furthermore, all four seem to welcome the challenge.

Yet there have been other names on Villanueva’s earlier command staff lists, who were greeted with far less enthusiasm when a few of their names also turned up on former undersheriff Paul Tanaka’s political donations list, meaning they had given money to one or more of Tanaka’s various campaigns for mayor of the city of Gardena, ostensibly as part of a pay-to-play patronage scheme, which the once feared  “shadow sheriff” was known for.

(WitnessLA reported on this issue extensively, as you’ll find here. But please note that inclusion on this list does not mean someone gave money to Tanaka unless a dollar number is indicated next to his or her name. And having given money does not automatically mean someone was close to the former undersheriff. Plenty of people were threatened into donating.)

It was cause for further consternation when some of the names floated for promotions during the pre-swearing in week were also people who are rumored to have ankle tattoos signifying membership in one of the older deputy gangs like the Vikings, the Regulators, or the Grim Reapers. In one person’s case, the matter of a Viking tattoo was reportedly confirmed—although that person appears to no longer on the newest command staff list.

Of course, still sporting the tattoo of a deputy gang insignia, which was acquired decades ago, may not be at all indicative of one’s policing ethic now—or ever. Yet, given that the deputy gang problem is far from handled in the department, as one department watcher put it, “It sends a problematic message.”

Nevertheless, by the close of Monday’s swearing-in celebration, heartened by Villanueva’s reformist statements, and also encouraged by his picks for those at the top of the department’s new food chain, for many the worries had at least lessened.

Look,” said Villanueva’s spokesman to us on Monday night, “he’s not getting rid of oversight, and he’s taking a strong look at all these positions.”

In other words, chill and give the new sheriff a chance to institute the reforms he’s promised.

Civil rights attorney, Brad Gage agrees.  “I think that Alex will be a breath of fresh air and has innovative ideas to help protect the citizens of the county,” said Gage, who went to the swearing in.

Peter Eliasberg of the Southern California ACLU agreed, at least in part.

“There are things I like a lot and there are things that concern me,” he said, and brought up the constitutional policing advisor issue as a source of concern.

On the other hand,  Eliasberg continued, “he has said he thinks there are too many people in the jails, and I agree with him strongly on that. So I’m hopeful he will be proactive on those kind of issues….”

We will all know much more as Sheriff Villanueva’s first days, weeks and months unfold.

In the meantime, a great many people inside and outside the department are rooting for him to succeed.

Be sure to read Maya Lau’s excellent story in the LA Times about how the Sheriff Villanueva’s victory in the race for sheriff is part of a decades-long fight for reform in the LA County Sheriff’s Department.