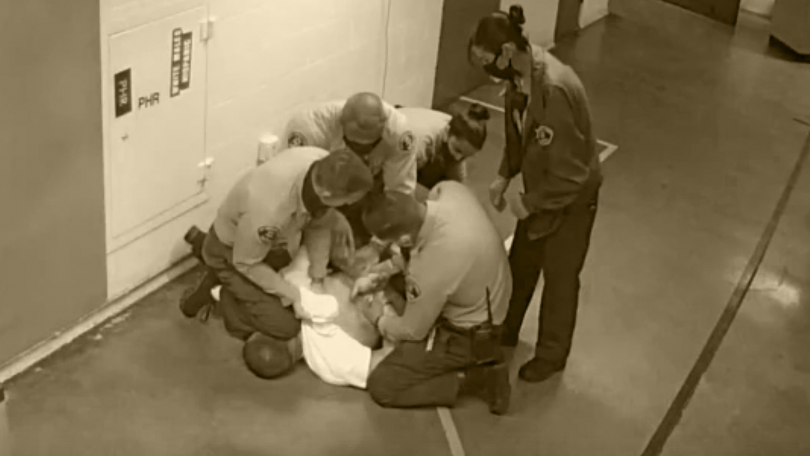 On August 4, according to Sheriff Alex Villanueva, the Los Angeles Sheriff’s Department got a subpoena, or multiple subpoenas, asking for the LASD to turn over records pertaining to the case of Deputy Douglass Johnson, who knelt for more than three minutes on the head and neck of jail resident Enzo Escalante, when Escalante was handcuffed and no longer resisting.

According to WitnessLA’s sources, in recent days, a list of whistleblowers plus other members of the Los Angeles Sheriff’s Department—working and retired— also received subpoenas to testify before an investigative grand jury which is probing the issue of the head-kneeling deputy cover-up scandal.

Meanwhile, on Tuesday of this week one of those whistleblowers, former Assistant Chief Robin Limon, filed a new and disturbing civil rights claim, which describes in detail much of the sequence of events that the grand jury is reportedly exploring.

The 49-page legal filing, written by Limon’s attorney, Vincent Miller, is a handy document to have right now, as it walks the reader step-by-step through the alleged cover-up of the Deputy Johnson/Enzo Escalante case.

The new grand jury investigation began holding hearings the day after the first day of Vanessa Bryant’s lawsuit about the unauthorized post-death photos taken of her husband, basketball icon Kobe Bryant, after he and their talented basket-ball-playing daughter, along with the seven others, died in a devastating helicopter crash in January 2020.

In a case of painful symmetry, Deputy Johnson was one of the sheriff’s deputies who took the terrible photos and reportedly showed them to friends and acquaintances, as if they were vacation snapshots.

The coincidental proximity of the Bryant trial is also a reminder of the fact that Sheriff Villanueva reportedly never disciplined Johnson for his invasive photo-taking, but instead merely asked him to delete the evidence from his cell phone.  He was not relieved of duty, not sanctioned. Nor did he receive any kind of retraining.

And so it was that in March 2021, fifteen months after taking the invasive Bryant crash photos, Johnson engaged in the unnecessary and dangerous use of force on Enzo Escalante, the cover-up of which a Los Angeles grand jury is now investigating.

According to WLA’s sources, witnesses began testifying on Thursday regarding the head-kneeling-deputy case, and its alleged cover-up, with testimony set to continue next week.

Many of the whistleblower/witnesses have, like Limon, already filed their own civil rights lawsuits describing how they were retaliated against by Sheriff Villanueva when they declined to go along with the sheriff’s self-serving accounts of why the press and public had never heard about the neck kneeling by Deputy Johnson until somebody slipped the LA Times a copy of  the surveillance video of the incident (which you can see it  here in case you’ve somehow missed it).

It was only after the video was leaked to Times, and reporter Alene Tchekmedyian released her story about the incident, that Villanueva called a press conference during which he vehemently denied the suggestion that he had participated in a cover-up of the head-kneeling incident.

According to the sheriff, he didn’t see the video of Johnson’s actions at all until November of 2021, approximately eight months after the encounter between Escalante and Deputy Johnson occurred.

Villanueva also said that, when he did finally learn of the matter in November 2021, he called for a criminal probe immediately, and ordered Deputy Johnson to be relieved from duty.

In fact, none of the above was true. After the video was leaked to the LA Times. Villanueva demoted two members of his command staff—namely the two upper level women, Limon and then Chief LaJuana Haselrig—without any investigation, without any evidence whatsoever for their supposed part in the cover-up that he had initiated months before, and plenty of evidence to the contrary.

After the LAT story, Limon, who was at the time an Assistant Sheriff, was reportedly told she must retire immediately, or be demoted 4 ranks.

Limon left. Then she filed a whistleblower lawsuit.

In the room where it happened

The big problem with the sheriff’s account of what he knew and when he knew it, according to the detailed accounts of Limon and several other whistleblowers who have filed their own civil lawsuits, is that Villanueva’s account was provably untrue.

Contrary to the sheriff’s version of events, Villanueva was reportedly given a copy of the head-and-neck-kneeling surveillance video in mid-March 2021—in other words, within days of when it occurred.  It was then that the sheriff reportedly watched the video in the company of multiple department higher-ups, including then Assistant Sheriff Limon, Undersheriff Tim Murakami, and Sheriff Villanueva’s then aide, Lt. Anthony Blanchard.

Limon, Blanchard, and Murakami have, of course, been subpoenaed to testify in front of  the grand jury.

We have a pretty good idea of what Limon might be likely to say in her testimony, because we can read her account in her new civil rights complaint.

Murakami and Blanchard are a different matter.

Some months ago, Murakami and Blanchard were asked at a press conference if they saw the damning video a few days after the use-of-force incident occurred, as people who like Limon and others have said was the case.

Murakami said no, when asked the question on camera.  But, when Blanchard was asked the same question, he looked as if he’d like to dematerialize as he phumphered out a not terribly convincing non-denial denial.

(It was at that same press conference that the sheriff announced he was investigating LA Times journalist, Alene Tchekmedyian.)

So, what will Blanchard say under oath?  And what will Murakami say?   If Sheriff Villanueva is lying about the sequence of events, and was the architect of the cover-up from the beginning onward, will they take a bullet for the boss and perjure themselves?

Sources told us that someone close to Blanchard, to whom he reportedly confides, was also on the subpoena list.  If so, what kind of information does that person have?

Since observers are not allowed in a grand jury hearing, Limon’s detailed account of the alleged Johnson/Escalente cover-up makes for interesting reading.

The story starts on March 10, 2021, when Enzo Escalante, who was in jail waiting to go to trial on a number of charges, including murder, when— as he was being moved down a hallway in the San Fernando Courthouse—he was pushed against or guided to a wall by Deputy Douglas Johnson. In reaction to the shove, Escalante assaulted Deputy Johnson.

Johnson and other deputies immediately took Escalante to the ground, then quickly subdued and handcuffed him at which point Escalente stopped struggling and became visibly compliant.

“That should have been the end of the incident,” said Limon in her complaint.  Instead, for approximately three minutes after Escalante was visibly passive, “Johnson held his knee onto Escalante’s neck and restricted his breathing.”

As the minutes went by, the actions captured by the video of the incident became a painful echo of the actions of Derek Chauvin which resulted in the death of George Floyd.

Escalante didn’t die, but according to several department members who initially saw the video, he was injured.

Limon’s lawsuit further tells how, on the same day that the use-of-force incident occurred,  Captain Robert Jones at the department’s West Bureau saw the video and was alarmed. He called Commander Allen Castellano, who then alerted  his own supervisor, then Chief LaJuana Haselrig, who also viewed the video.

According to Limon, it was then that Castellano and Haselrig asked her to view the distressing video.  After doing so, she reportedly agreed that Deputy Johnson’s actions had been “excessive and dangerous.”

The three also noted that the deputy’s actions not only looked “wrongful and dangerous,” they bore a discomforting “similarity” to the deadly actions of Derek Chauvin.

Limon agreed with Haselrig and Castellano that Villanueva “should be shown the video promptly.”

After viewing the video, according to Limon, Villanueva told her, Murakami, and Blanchard, that “we” (the LASD) “do not need bad media at this time.”

Villanueva then reportedly told Limon he would “handle the matter,” she said, leading her to believe that the Sheriff would follow proper protocol, and that the case would be moved right away toward a criminal investigation.

In her new filing, Limon also states that she reported back to Castellano and Haselrig that she showed the video to the Sheriff.

However, by “handling the matter,” said Limon, it turned out “Villanueva really meant that he would proceed to obstruct justice and direct a cover up of the incident.”

Castellano, Haselrig, Jones, and others,  with direct knowledge of various parts of the alleged cover-up, such as LASD Captain Angela Walton, have all reportedly been subpoenaed.

Catellano, Haselrig, and Walton have each brought their own civil rights lawsuits. And, as WLA reported earlier, Walton is not only able to describe her direct experience with the events surrounding the handling of the case of Deputy Johnson kneeling on Enzo Escalante’s neck, Walton also has a string of emails and other documented communication that backs up her statements, many of which directly contradict those of the sheriff.

An additional piece of the puzzle may be found in the federal lawsuit that Enzo Escalente has recently filed, with civil rights attorneys Justin Sterling and Erin Darling representing him.

“The Los Angeles County Sheriff’s Department is supposed to protect the pre-trial detainees it keeps in its custody,” write Sterling and Darling, at the opening of Escalante’s federal complaint.

“It is also supposed to ensure that its deputies are properly trained to avoid violating the law, and properly punished when they do.”

But in the case of Deputy Johnson, that was not what occurred.

According to Escalante’s complaint, the abuse didn’t end there.  Instead, when Escalante got new legal representation, jail personnel began retaliating, Sterling told WitnessLA.

Escalante was prevented from being visited by family members, Sterling said, and his calls to his legal counsel have repeatedly been derailed, as are his visits by counsel.

It’s important to note that Limon’s lengthy new complaint covers a lot more than the case that the grand jury is investigating.

There are expanded accounts of the sheriff assigning LASD employees to work nearly full time on his re-election campaign, along other alarming stories of extravagant cronyism that has allegedly repeatedly ignored blatant wrongdoing on the part of loyalists, and a wide variety of other disquieting accounts of corruption.

But these are stories to explore on another day.