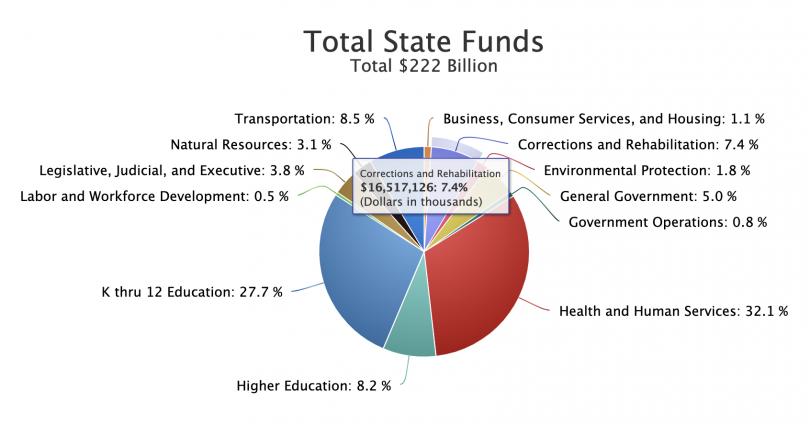 On Friday, California Governor Gavin Newsom unveiled his plans for the 2020-2021 budget, a $222.2 billion proposal that features important changes to probation and pretrial diversion, jail reforms, and a potential prison closure, among other big changes in the world of justice.

Below, WitnessLA has compiled some of the highlights from the governor’s proposed criminal justice spending.

Based on Newsom’s January budget proposal, spending for the Department of Corrections and Rehabilitation will increase to $13.4 billion next year from the $12.7 billion allocated for the current fiscal year.

The annual savings from Proposition 47 increased by $44 million to $122.5 million this year. This means that $44 million more than last year will go toward diversion and reentry services, mental health treatment, truancy prevention, and trauma recovery services for crime victims, as prescribed by Prop. 47.

One budget area of particular note is a pot of money headed toward replicating LA County’s successful diversion system, which has pulled 4,305 diversion-eligible people out of LA’s jails since 2015.

Modeled after the LA system, Newsom’s pilot will focus on diverting people with mental health needs in other regions of the state away from lockup and into community-based services.

The CCCP will be piloted in three counties, where individuals declared incompetent to stand trial will be sent into appropriate community placements, rather than languishing in jail waiting for a state hospital bed to become available. An additional $8.9 million will pay for approximately 63 “competency restoration treatment beds” inside county jails.

The budget news arrives one week after a RAND Corp. study confirmed that LA County could and should expand its own diversion program to reduce jail populations and better serve the needs of mentally ill Angelenos. The study found that approximately 61 percent (more than 3,300 people) of the county’s mental health population locked in jails could safely be released into community-based care.

“We are grateful to Governor Newsom,” said Judge Peter Espinoza, Director of LA’s Office of Diversion and Reentry, “for this opportunity to expand the work we are already doing with hundreds of patients in partnership with the state to improve the lives of those who are incompetent to stand trial by removing them from jail, housing and treating them in the community, where they may remain in supportive housing.”

Another consequential aspect of the 2020-2021 budget is a plan to overhaul the state of probation in California, in order to reduce recidivism and flood those under supervision with services to help them succeed.

Newsom proposes limiting probation terms for felonies and misdemeanors to twenty-four. “This conforms with research that suggests that the maximum time needed to engage probationers in behavior change and reduce the likelihood of reoffending is no more than two years,” said Newsom.

The new plan is to “front-load” services for both people serving probation terms for felonies and those under supervision for misdemeanors. Newsom intends to address “chronic repeat” low-level offenders by boosting services for those who keep committing misdemeanors — a group underserved by the current system.

The new probation plan has garnered the support of both Californians for Safety and Justice and the Chief Probation Officers of California (CPOC).

“California is safer when our public safety systems focus on what works best to reduce recidivism and make communities healthier and safer,” said Lenore Anderson, president of Californians for Safety and Justice. “When probation system resources are tailored to incentivize success and meet individual underlying needs, we can better ensure the cycles of crime and incarceration stop.”

“This is a progressive way to align probation practices to gain better public safety outcomes and acknowledges the needed resources to work with people early in their term which is the most crucial time to change behavior, reduce re-offense and help address needs,” Chief Brian Richart, President of the Chief Probation Officers of California (CPOC), said in support of the plan.

Also high on the governor’s budgetary priority list is reforming the juvenile and adult prison systems for the young people locked inside.

Specifically, Newsom intends to move youth in adult prisons who are under 26 into “campus-style” spaces within their prison where they will receive education, mentorship, and programs tailored to the needs of young adults. The first of the housing systems, to be called “Youth Offender Rehabilitative Communities,” will be launched at Valley State prison in Chowchilla.

Since his inauguration, Gov. Newsom has been working to move the juvenile system out from under the CDCR and into the Department of Health and Human Services.

Newsom’s plan is to, as he calls it, end “the juvenile justice system as we know it.”

In February 2019, the Center on Juvenile and Criminal Justice released a report exposing troubling conditions within the DJJ’s three main lockups, where a disturbing climate of violence and fear continues to breed trauma in already traumatized youth.  After the report was released, WitnessLA continued to monitor DJJ’s punitive staff culture and other pressing issues.

By moving the juvenile justice system to HHS, the governor hopes to achieve goals that include “providing trauma-informed and developmentally appropriate services in order to support a youth’s return to their community, preventing them from entering the adult system, and further enhancing public safety.”

Also tucked within Gov. Newsom’s proposed budget is $1.7 million from the General Fund followed by $3.5 million in ongoing funding for inmates to participate in an expanded bachelor degree program through the California State University system. The money will go toward training, supplies, and tuition for students.

The budget sets aside a far larger sum — $26.9 million in its first year — to purchase 40,000 laptops and other equipment through which prisoners can pursue education outside of the classroom, including the California High School Equivalency Certificate and community college classes.

Prisoners also stand to benefit from a $4.6 million ongoing fund to increase visitation days from two per week to three at nine prisons, with the goal of helping to maintain family connections, which have long been known as a crucial part of restarting life on the outside. “Visitation provides inmates with the opportunity to establish and maintain a continuum of social support, including parent-child relationships, which are critical for successful reentry,” Newsom said in his budget.

Another interesting budget item is funding allocated for a new facility and program focused on boosting training for correctional officers and counselors.

The training is projected to cost $21.4 million in its first year, with a slightly fluctuating price tag in the years to follow. Newsom expects the cost to decrease to $19.8 million by 2023-2024.

“A critical component of a well-functioning correctional system is a professional, well-trained workforce,” the budget proposal states. “Correctional officers and counselors play an especially important role in the rehabilitation efforts of inmates.”

A pot of $21.6 million in General Fund dollars, followed by $2.1 million annually, is slated to be used to improve video monitoring at three prisons weighed down by issues of violence and staff misconduct — Salinas Valley State Prison, Richard J. Donovan Correctional Facility, and the California Institution for Women (CIW).

In addition to reforms inside prisons, the governor has been working toward reducing the state’s reliance on incarceration altogether.

Thanks to projected prison population reductions of 4,300 prisoners between 2021 and 2024, the state may soon be able to close a state prison, stated Newsom in his budget. The prison population continues to decline thanks to state reforms like Propositions 47 and 57. In addition to a movement toward closing a state prison, CA is also on track to phase out the use of private prisons altogether, thanks to AB 32.

Criminal justice advocates lauded the news about a projected state prison closure as a “smart step” toward improved public safety.

Senator Nancy Skinner (D-Berkeley) also praised the governor’s plan, saying she looks forward “to working with his team to help bring the era of mass incarceration to an end and to enact further reforms to our prison system.”

Last October, Governor Newsom signed SB 375, a bill to extend the state’s 3-year deadline to 10 years for crime victims to apply for such compensation.

The problem has long been that victims often miss out on much-needed help because they are unaware that they can apply for assistance in the first place, or they find out too late and miss the deadline.

Yet the newly extended deadline will put a strain on the already steadily depleting victim compensation fund.

Thus, to bolster an important fund currently facing insolvency, Gov. Newsom hopes to put a one-time infusion of $23.5 million into the victim fund.

The budget proposal also sets aside nearly half-a-million in General Fund dollars and another half-million annually toward legal services for victims.

Improving the State of Public Defense

Another item tucked inside the budget is a $4 million pot of money (plus $3.5 million annually) to expand the mission of the Office of the State Public Defender to include improving public defense services at the local level. Currently, the office is primarily focused on death penalty cases.

A secondary one-time $10 million cash infusion will go toward a collaborative pilot program run by the Board of State and Community Corrections and the State Public Defender to increase funding for public defense at the local level.

Newsom intends to put $8.1 million, plus $15.5 million annually thereafter, toward placing court navigators in trial court settings to help individuals who are unrepresented “navigate the complexities of the court system.”

These navigators “will help bridge access to justice gaps, improve customer service to court users, such as collaborative court participants and victims and family petitioners, and increase the positive impacts of existing self-help services,” according to the budget.

Cutting Into the $1.4 Billion Cash Cow of Criminal Fines and Fees

The January budget proposal aims to expand an ability-to-pay program currently only available to traffic law violators to include people hit with criminal justice system fines and fees. The current program allows low-income Californians to apply online to reduce their tickets and fees by approximately 50 percent, while applying for a payment plan. Expanding the program to benefit people accused of other infractions and crimes (and their families) will run the state approximately $11.5 million in 2020-2021, increasing to $56 million ongoing by 2023-2024.

Correction: This story originally listed one allocation for improving public defense as $10. The correct amount is $10 million.