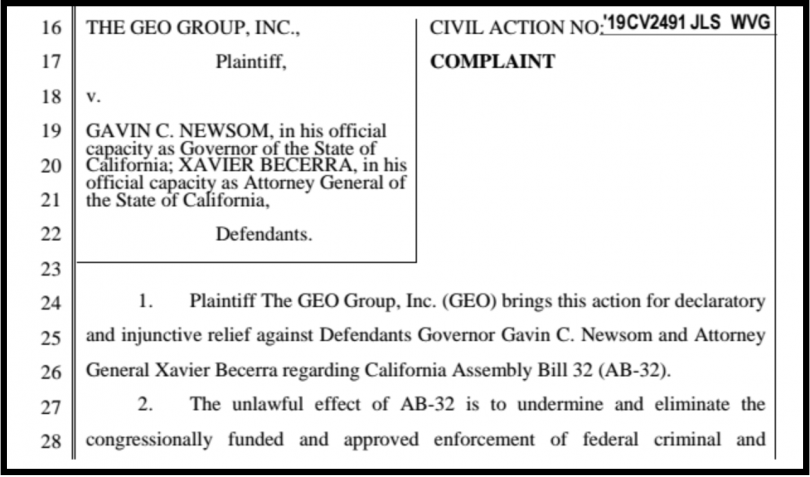 For those unfamiliar, AB 32 banned the CA Department of Corrections and Rehabilitation from renewing or entering into new private prison and immigration detention contracts in the state after Dec. 31, 2019. And by 2028, the law will entirely phase out the state’s use of controversial for-profit lockups, which have long been faulted for housing prisoners and detainees in understaffed facilities, under substandard conditions, and with poor medical care.

AB 32 does not apply to privately owned facilities run by the CDCR or local law enforcement, only facilities that are operated by private prison companies.

The new law does not ban the CA prison officials from contracting with for-profit companies if the state must do so in order to comply with a federal court-ordered prison population cap of 137.5 percent capacity.

Additionally, the bill will not block the feds from erecting their own facilities, or contracting with counties to use their jails, as is the case with Orange County’s Theo Lacy Facility.

AB 32 will affect at least 10 privately run facilities with 10,925 beds, according to GEO Group (which runs 7 of those lockups).

In its 31-page complaint, GEO Group called the bill an “unlawful” effort to “undermine and eliminate the congressionally funded and approved enforcement of federal criminal immigration law” in California by federal agencies. In other words, GEO Group says it legally should “enjoy immunity from state control” as a company contracting with the federal government to carry out a federal program.

The Florida-based GEO Group also contended that the loophole in the law to allow the state to use private prisons to stay under the mandated prison population cap “effectively exempts the entire California prison system from its prohibition on private detention facilities” and thus, discriminately targets only U.S. immigration detention facilities.

“This transparent attempt by the state to shut down the federal government’s detention efforts within California’s borders is a direct assault on the supremacy of federal law, and it cannot stand,” said GEO Group.

“…If AB-32 forces GEO to close its USMS and ICE detention facilities in California,” the complaint said, “GEO could lose over $4 billion in capital investment and future revenue over the next fifteen years.”

Moving quickly to circumvent AB 32 before it could take effect, U.S. Immigration and Customs Enforcement (ICE) quickly entered into four private contracts totaling $6.5 billion and doubling the state’s immigration detention capacity to just under 7,200 beds. GEO landed two 5-to-15-year contracts for the company’s immigration facilities in Adelanto and Bakersfield for a combined total of $3.7 billion. Current contracts for GEO’s facilities were set to expire in March 2020.

In response to the lawsuit, the Dignity not Detention Coalition, a group of immigration rights advocacy organizations, slammed the “unscrupulous” GEO Group and its complaint, which the group called a “shameless attempt by the GEO Group to protect its ill-gotten profits, safeguard illicit contracts which violate state and federal law, and to undercut the will of the people.”

“Our tax dollars should not pay for immigrants’ suffering,” said Dignity not Detention. “In court, GEO and its shocking track record of abuse and in-custody deaths will be exposed to the light of public scrutiny.”

On Twitter, Assemblymember Rob Bonta (D-Oakland), AB 32’s author, called the lawsuit “exactly what you’d expect” from “a collapsing industry in its final death throes — a desperate attempt 2 buy another year of survival 2 pad its corporate profits, despite a nation’s rejection 4 profiteering on the backs of humans/treating people as commodities.”