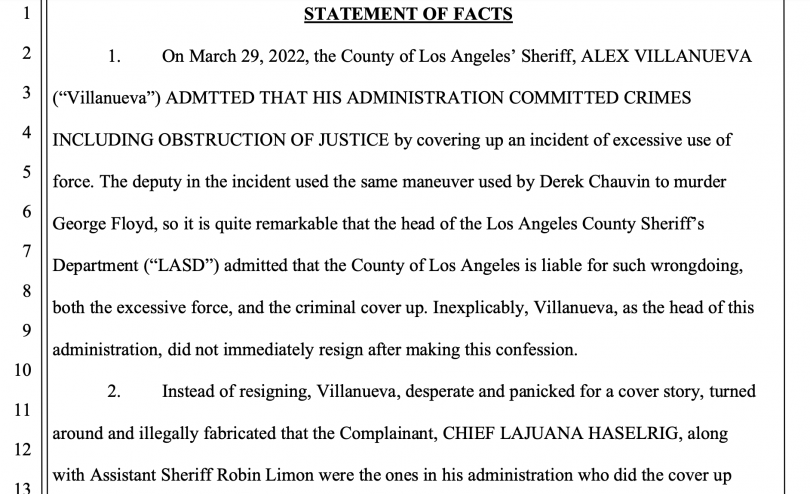 Attorney Vincent Miller has just released the third in a series of civil rights lawsuits brought by whistleblowers who describe their personal knowledge of the cover-up by Sheriff Alex Villanueva regarding the now notorious case of Deputy Douglass Johnson.

Johnson, if readers will remember, is the deputy who knelt for more than three minutes on the neck and head of a jail inmate named Enzo Escalante.

In addition, all of the three whistleblowers tell how they were on the receiving end of career-wrecking retaliations by the sheriff when they declined to go along with Villanueva’s self-serving and provably false descriptions of when he first became aware of the alarming video showing Deputy Johnson’s kneeling on the handcuffed Escalante’s neck, and whether or not he initiated a cover-up to keep knowledge of the video from the press and the public.

Each of these complaints brings with it a raft of new details that directly contradict the elaborate story that the sheriff has been telling.

Early last week, attorney Miller filed a complaint on behalf of LASD Commander Allen Castellano who alleged, among other things, that Sheriff Villanueva blocked and stalled the investigation into the Deputy Johnson/Escalante incident to “avoid bad publicity for his re-election campaign.”

Next came the civil rights complaint of former LASD Assistant Sheriff Robin Limon who told how she had been retaliated against “because she has personal knowledge” of the fact that five days after the use of the potentially lethal use force incident by Deputy Johnson, Villanueva had seen the video of Johnson’s actions.

Now, today, May 4, there is a brand new lawsuit, this one brought by former LASD Chief LaJuana Haselrig who was the department executive who gave the video of the troubling head and neck kneeling by the deputy to Limon with the understanding that then Assistant Sheriff Limon would take the recording to the sheriff, who was to watch the video in question right away.

And indeed, according to Limon, she and the sheriff watched the video together with Undersheriff Tim Murakami, and the sheriff’s aide, Anthony Blanchard.

(It should be noted that at last week’s journalist-threatening press conference, both Murakami and Blanchard each issued a phumphering pair of semi-non-denial denials about whether or not they’d seen the video during those first days after the use-of-force incident.)

Also that day, according to Haselrig, Limon confirmed to her that she had watched the video with Villanueva and company, and that the sheriff  agreed the force looked bad and that he would “handle it,” which Haselrig and Limon interpreted to mean that he would take responsibility for the investigation and the required referral to LASD’s Internal Criminal Investigation Bureau, ICIB.

Instead, according to Haselrig and Limon, Villanueva blocked an ICIB investigation against Deputy Johnson, and also blocked the filing of assault charges against the inmate, Escalante, even though proper procedure reportedly required such a filing against Escalante—who slugged (or attempted to slug) Johnson on video—to take place quickly.

“Villanueva knew that if assault charges were filed against the inmate, his defense attorney would have gotten access to the video and the public could see it,” Limon said in her complaint.

Slightly more than a year after Villanueva saw the video, on March 25, 2022, the LA Times released a story on the head kneeling incident together with a portion of the video of Deputy Johnson’s use-of-force actions

After the LAT story came out, Villanueva called a press conference during which he vehemently denied the suggestion that he had participated in a cover-up of the head-kneeling incident.

According to the sheriff, he didn’t see the video at all until November 18 of 2021, approximately eight months after the incident with Escalante and deputy Johnson occurred on March 10, 2021, and eight months after March 15, 2021, the day that Haselrig reportedly gave the video to Limon, who watched that same video with the sheriff, his undersheriff, and his assistant.

By Villanueva’s account, however, when he did finally learn of the matter in November 2021, he called for a criminal probe of the use-of-force incident, and ordered the head-kneeling deputy to be relieved from duty—both actions that a string of emails and other department sources with direct knowledge all dispute.

Then, evidently thinking this would add weight to his story, the sheriff demoted two members of his command staff for their supposed part in the cover-up.

The members of his command staff whom he blamed for the cover-up, and subsequently threatened with multi-rank demotions, were Chief LaJuana Haselrig, and Assistant Sheriff Robin Limon.

To put it another way,  “in an effort to make the frame up of his staff look plausible,” states the Haselrig complaint, Villanueva forced out two of the highest ranking women in his administration, Haselrig and Limon.

The method the sheriff reportedly used was simple.  According to Haselrig’s Villanueva ordered each of the two to pick between two “poisonous options,” by the end of the business on March 29, 2022.  They must either retire or be demoted drastically.

Limon was to be demoted four ranks, back to lieutenant.  Haselrig, who had been with the department for 33 years, agreed to retire, after learning about the poison pill choice when she was at home on medical leave.  It seems that, against department policy, Undersheriff Tim Murakami came to her house and delivered the news.

The timeline, true and false

To once again remind readers of the timeline behind these events, March 15, 2021—which is the day that Limon describes seeing the disturbing video with the sheriff—is five days after the use-of-force incident took place on March 10.

As luck would have it, the sheriff saw the video seven days after attorneys began interviewing potential jurors for the trial of former Minneapolis police officer Derek Chauvin for the murder of George Floyd, reportedly causing the Villanueva to worry about the “optics” of the three-minute plus neck and head kneeling, which was an alarming echo of the brutal actions that led to Floyds death.

March 15, 2021, the date when Haselrig gave the video to Limon, who then reportedly watched the video with the sheriff, was eight months and three days before November 18, 2021, which is the day that Villanueva would later claim—and still continues to claim—that he first saw the video and knew of the incident.

Yet, according to Haselrig and Limon—along with others with whom WLA has spoken who have yet to come forward publicly, but who also reportedly have personal knowledge of the timeline—shortly after seeing the video the sheriff blocked a criminal investigation by the department into the bad optics head-kneeling incident.

Villanueva began lying about the timeline of his knowledge in late March 2022, once the public learned about the incident and the disturbing video courtesy of the March 25, 2022 LA Times story, written and reported by LAT journalist Alene Tchekmedyian.

Tchekmedyian is of course, the journalist whom the sheriff recently threatened with a criminal investigation, a threat that he then retracted after his apparent attempts at press intimidation made national news.

Another troubling part of former Luana Haselrig’s civil rights filing is her description of alleged statements by Sheriff Villanueva that suggest an antipathy toward Black department members for supposedly holding him back in his career.

For example, in her complaint, Haselrig describes an incident when she expressed to Villanueva that she “hoped there would be fairness and opportunity for qualified African Americans to promote in the department.”

According to Haselrig,  Villanueva told her that “we have enough of you,” meaning enough Black LASD members in management, “indicating a bias against African Americans seeking earned promotions.”

In other sections of the complaint, Haselrig describes the sheriff’s repeated threat of how he planned to “get back” at this or that department whistleblower, or someone else who pointed to his wrongdoing.

The complaint also notes that Villanueva “regularly uses a certain political tactic against whistleblowers,” as he reportedly did with Haselrig, Limon, and Castillano, and others.

More one this and related topics so….watch this space.

In the meantime, here’s the link to the Haselrig civil rights filing, and below is the filing itself.