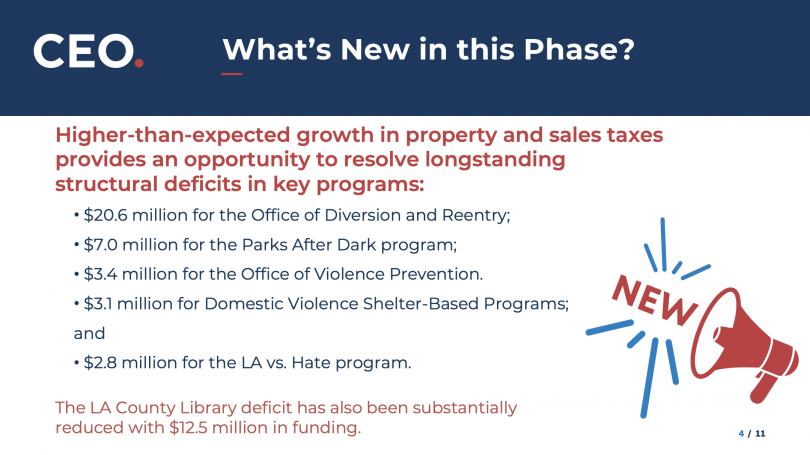 For the past year and a half, the Los Angeles County Office of Diversion and Reentry’s housing programs have been operating at maximum capacity, meaning that ODR has been forced to turn away people who could otherwise be diversion candidates.

However, ODR’s programs will expand by 750 beds in the upcoming 2022-23 fiscal year, thanks to state funding along with a pot of money courtesy of the county’s newly finalized supplemental budget.

Since its inception in 2015, ODR has diverted more than 8,500 people from the county’s jail system, including people with severe mental health needs, pregnant people, and those whose main problem is the struggle with chronic homelessness.

But from April 2121 onward, the flow of people out of LA County’s jail system and into ODR’s housing-focused diversion programs has been forced to slow to a trickle, due to the fact that the various programs under ODR’s banner had collectively filled the mandated limit of 2,200 beds. Thus, for a year and a half, high-needs individuals who could benefit from community-based care and permanent housing have been stuck in overstuffed and dangerous jails.

A backslide on decarceration

During the first few months of the COVID pandemic, county leaders put into place emergency measures that caused LA’s jail population to drop dramatically, from over 17,000 residents to just under 12,000 in the spring of 2020.

Yet, in more than two years that have passed since the initial shock of the deadly pandemic, incarceration numbers have fluctuated significantly. Now, as of October 14, 2022, the population for the nation’s largest jail system has reached nearly 15,000.

(For reference, the Board of State and Community Corrections issued LA County’s jail system a maximum capacity of 12,404 people.)

In addition to lowering the high jail population in general, the opening of new diversion beds is an important step toward closing the dungeon-like Men’s Central Jail, a goal that county leaders have been working toward for more than a decade, with a troubling lack of concrete progress.

Faced with reports of overcrowding and horrific conditions in the Inmate Reception Center, at the end of September, the LA County Board of Supervisors voted to look into what it would take to build or procure locked medical facilities for people in the county’s jail system who have the most severe forms of mental illness.

The idea that building a new locked facility was deemed to be a reasonable solution to overcrowding of the county’s jails caused Supervisor Holly Mitchell to publicly express her frustration that the board seemed to be ignoring the obvious potential of the county’s successful, but woefully underfunded, clinical diversion system to reduce the jail population by thousands of people.

Matters were not helped by the fact that, in June, the board sidestepped Mitchell’s efforts to incrementally scale up ODR’s capacity by 3,600 beds, voting instead for a watered-down motion to expand ODR by 500 beds with no set deadline for doing so. (Read more backstory on the issue here.)

The situation changed on October 4, when the Board of Supervisors approved the county CEO’s recommended supplemental budget. The money comes thanks to an influx of cash from the state via AB 109, the “realignment” system first instituted in October 2011, which shifted the incarceration burden for people convicted of certain low-level crimes away from California’s overcrowded prison system to the states’ 58 counties.

Money saved at the state level from Realignment is funneled into local programs, including youth justice programs, courts, and mental health services. In the past, LA County has faced criticism for how much of the money goes to law enforcement.

In 2015, the Board of Supervisors voted that 50 percent of extra AB 109 funding  — above initial budget estimates — must go to ODR. (County officials don’t know exactly how much they’ll get from the state until closer to the end of the budget-building season, and the resulting funding adjustment shows up in the supplemental budget.)

A total of $171.5 million of this year’s AB 109 money appeared in the supplemental budget.

From that pot, ODR will receive $67.8 million for its housing-focused diversion programs, and $14.9 million for “reentry interim housing, job training programs, transportation, and mentoring/case management services.”

“That brings us closer to what I believe is a very reasonable goal of having 3,600 beds in next year’s budget,” said Mitchell.

In another piece of good news, the county also chose to designate an additional $20.6 million out of its local funding surplus in the supplemental budget to officially eliminate the structural deficit that ODR has operated under since the office’s creation.

Other interventions and programs meant to reduce incarceration gained new pots of money during this final budget tweaking as well, including Alternative Crisis Response, the Office of Violence Prevention, the Department of Youth Development, and the county’s soon-to-be Justice Care and Opportunity Department (we’ll have more on this new department later).

The county also set aside money for jail upgrades, including the addition of a psychiatric urgent care unit at Pitchess Detention Center, and the creation of 146 jail health care worker positions.

Mark Anthony Clayton-Johnson, Executive Director of Dignity and Power Now, said the “reflexive” allocation of additional funding for the sheriff’s department to patrol black and brown communities was “deeply concerning.”

Supervisor Mitchell seemed to agree with the justice advocates.

“I remain committed to having a budget that reflects our values and equitably reaches our underserved — and often hardly served — communities,” Mitchell said.

“Increased allocations and supplemental [funding]” given to the county’s  probation and sheriff’s departments  “do not move us closer to ‘care first,’” said Mitchell.

To achieve that goal, concluded Supervisor Michell, the board will need to continue to make “tough choices,” if  LA County is to achieve the ‘care first’ environment “that I know we all envision and strive for.”