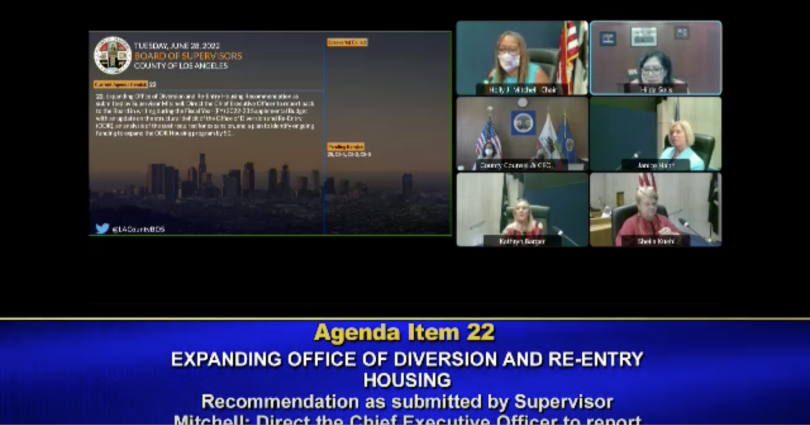 On Tuesday, June 28, the LA County Board of Supervisors voted in favor of a motion meant to expand diversion programs that offer permanent housing and wraparound services to people who would otherwise remain in jail or be sent to prison. This includes those with severe mental health needs, pregnant individuals, and those struggling with chronic homelessness.

The Office of Diversion and Reentry’s housing programs — including the Maternal Health Diversion Program, which we wrote about in a 5-part series last year — have been at capacity and all but closed off to new participants since April 2021.

In the meantime, community organizations have hosted rallies, called into the weekly board of supervisors meetings, sent the board members letters, and otherwise pushed for urgent action to support ODR.

The approval of Tuesday’s motion appears to be a small step in the right direction. But the situation is complicated. And community groups are highly vocal in their dissatisfaction with the board for severely watering down the original motion.

Here’s how it happened

In advance of the LA County Board of Supervisors meeting on June 14, Supervisor Holly Mitchell penned a motion that sought to raise the housing cap of the programs from 2,200 beds — which ODR reached in April 2021 — to 2,700 beds. From there, the motion called for incremental increases to ultimately reach 5,800 beds.

Dozens of people wrote and called in to the board to support the expansion.

The motion faced pushback from other members of the board, however.

Supervisors Janice Hahn and Sheila Kuehl responded with an amendment that made extensive changes to the nature of Mitchell’s original motion.

While the amendment retained language calling for an exploration of funding possibilities for adding 500 beds to ODR’s housing services, the supervisors eliminated the directive to the CEO to seek funding to expand capacity beyond that 500.

Hahn and Kuehl also wanted the county to figure out how to use various forms of funding, including money from the state for Medi-Cal and AB 109 Realignment, for ODR’s operations. The department, which was launched with a pot of one-time funding in 2015, has not been sustained by subsequent allocations in the county’s annual budget. Instead, this yearly trickle of money has mostly served to pull ODR back from the financial cliff.

Justice experts and other members of the public have commented to the board that if all of these negative outcomes are to be collected, the board should also track the many positive outcomes of those in the housing programs.

Seeing that the board was divided on the issue, and fearing the new version might do more harm than good, on Tuesday, June 14, Mitchell put the motion on hold for two weeks, making space for Mitchell and the other supervisors to create a motion that the board, as a whole, would be willing to support on June 28.

The new motion largely retained the changes Supervisors Hahn and Kuehl proposed in their amendment issued earlier in June.

Yet, Kuehl showed up to the June 28 meeting with a surprise amendment to be read in.

“I’m introducing an amendment, which I know is not accepted as a ‘friendly amendment,’” said Kuehl, in acknowledgement that Mitchell would likely not support the changes. “But I hope the opposite isn’t ‘unfriendly.’ It’s just an amendment.”

Kuehl’s amendment asked for an analysis of how expanding ODR’s housing will impact the board’s other care first, jail last priorities. The supervisor told her colleagues that she didn’t want to shortchange programs that “reach people upstream” who may not qualify for ODR’s programs. “It doesn’t make sense to empty jail beds over and over and over, if we’re not in a position to prevent that same bed from being immediately filled with a new person.”

Mitchell did not agree.

“I would offer, Supervisor, it makes a huge difference to the person who is in that jail bed now, who doesn’t belong,” said Mitchell. “The point of this motion is to provide immediate relief to those incarcerated today, and transition them into a program we know works to meet their needs.”

The board does, in fact, know that ODR works, based on the programs’ own data and outside analysis. A 2019 RAND report, for example, showed that 74 percent of people in ODR’s supportive housing programs maintained housing stability over a 12-month period. Additionally, 86 percent of participants remained free of new felony convictions a year after they entered ODR housing.

Mitchell told Kuehl that the board needed to support ODR and other proven strategies. “This is a scenario where we can’t pick our favorite child,” she said. “We have to be committed to them both.”

In Kuehl’s opinion expanding ODR to house 500 more people would be “difficult” to do within a year.

Mitchell responded with what she described as “a hard no” to Kuehl’s removal of the deadline.

It was important, Mitchell said, to keep the expansion of ODR high on the priority list. The motion, without Kuehl’s proposed changes, would allow the board to “send a strong signal to the CEO and hold ourselves accountable about a date by which we expect to reach this particular goal.”

Members of the public called into the meeting in support of the Office of Diversion and Reentry, and of its timely expansion.

Gilbert Wright, a deputy district attorney assigned to lead the LA County DA’s mental health division, said that over the years, ODR’s effective work had created a paradigm shift with regard to how the DA’s office treats people with mental health needs.

Prosecutors initially responded to the creation of ODR with apprehension, he said. “But we have come to rely on ODR’s presence.” Prosecutors now frequently come to Wright to ask when ODR’s housing programs will reopen, he said.

ODR “understands that providing services for individuals for the rest of their lives is exceedingly important,” said Wright. A participant’s mental health needs don’t magically evaporate when their probation term ends.

“Increasing ODR’s bed capacity should be the highest priority of the board,” Wright said. “To say we support this motion is an understatement. We want these beds yesterday.”

Community advocates and local leaders agree that ODR’s expansion is critically important to the board’s plan to close the dangerously deteriorated Men’s Central Jail and to create a “care first, jail last” justice system, all of which Supervisor Kuehl had previously championed.

But closing the jail means that incarcerated people need to have somewhere else to go.

“I certainly don’t want to be here at the end of my term with Men’s Central Jail still open, having released 4,000 because of COVID, and having those beds in that facility filled again,” said Mitchell. “I worry deeply about not having a date.”

A deadline for expansion was not to be, however. With the support of Supervisors Kathryn Barger and Hilda Solis, Kuehl’s amended version passed.

The amendment, “essentially gutted that entire motion,” said Ivette Alé Director of Policy and Advocay at Dignity and Power Now, and a leader of the Justice LA coalition.

“Even next year is too long to wait to increase the ODR beds that are available,” said Alé, but Mitchell’s motion “was a starting point.”

“We are in a state of crisis right now in LA County,” the community leader told WitnessLA.

“Our jail numbers have crept up to pre-pandemic levels. This week, the LA County Superior Court will be rescinding the zero-dollar emergency bail order,” worsening the situation in the jails.

In a state of emergency, you must triage and handle the most immediate needs first, Alé said. “I cannot imagine anyone with a higher need than someone with severe mental health needs who is brought inside our jails.”

Part of Supervisor Kuehl’s legacy is the Alternatives to Incarceration Initiative, Alé said.

Alé and dozens of other community members and county leaders spent a year working with the county to draft the 51-page-long Alternatives to Incarceration report. Yet, the board continues to praise the ATI report, the supervisors have failed to take action. “It baffles me that they’re not jumping on the opportunity to expand an agency that’s working.”

The board members appear to be worried about the long-term sustainability of ODR. The county’s 2022-2023 budget draft includes some funding to address ODR’s deficit, but “that doesn’t get us to a point where we can expand access to additional beds,” Supervisor Mitchell said on Tuesday.

Members of the board may also be worried about the fact that ODR’s housing programs provide participants with supportive housing for as long as necessary. A person with severe mental health needs, for example, can receive housing and services through ODR for the rest of their life. What the supervisors may be missing in their calculation, said Alé, is that if that person loses the ODR bed, “they’re either on the street, or they’re in the jails, and either way the county’s on the hook for them.”

It’s obviously important to scale up alternative crisis response and services that keep people out of the jails in the first place, Alé said, but the county must do something about the people who are in jail right now.

Plus, while ODR has “developed tremendous expertise in jail-based clinical diversion,” as Supervisor Sheila Kuehl said on Tuesday, three out of five of ODR’s programs take on participants pre-plea and pretrial. Thus, it doesn’t seem unrealistic that the programs that currently require clients to enter a guilty plea and go on probation, could make the transition.

In the opinion of Alé and the coalition of community groups, the board has not taken nearly enough action to close the jail. “We’re beyond frustrated in the community that we’re just seeing these empty promises,” said Alé. “We’re here for the very hard work of implementation and the board isn’t willing to meet us halfway.”

Mitchell, too, appeared frustrated on Tuesday.

After the board passed Kuehl’s amended version of the motion, the next item on the agenda was a report on “the state of Black Los Angeles County.”

Mitchell noted that it was an interesting issue to transition to after the previous conversation, since “far too many” Black people are sitting in LA County’s jails.

“The racial justice piece cannot be lost in this conversation,” Ivette Alé said, because Black women are spending the longest amount of time inside the jails across race and gender, and are disproportionately impacted by mental health needs.