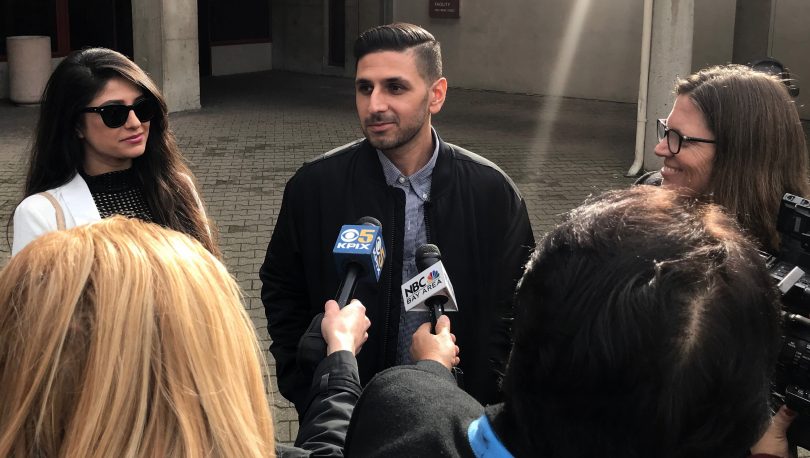 Since Khan had already served more than five times the required amount of time, the re-sentencing led to his release from prison later that same day after nearly sixteen years inside.

As it happens, Adnan Khan is one of the two authors whose essays WitnessLA has been publishing in a series called Dispatches from San Quentin, which has been made possible by the FirstWatch project at San Quentin State Prison, created in collaboration with a unique program called Re:store Justice. 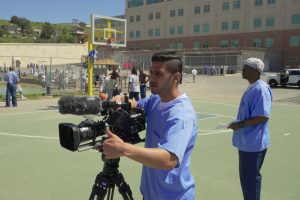 Now, as of last Friday, Khan has become the first person  in the State of California to receive re-sentencing and release since the implementation of SB 1437, the law that changed the felony murder rule

“The decision,” said said Kate Chatfield, Policy Director for Re:store Justice, and also Khan’s attorney, “brings a new promising reality of a more just system for the countless men and women who are currently serving life sentences for murders they did not commit.”

Upon his release, Khan moved into Re:store’s Oakland re-entry home, where he will remain while he gets on his feet and plans next steps.

SB 1437, which became California law on January 1, 2019, replaces the felony murder rule, which let prosecutors charge all accomplices to a felony, such as robbery, with murder, if the crime resulted in death, no matter if the person had no part in the killing, and never intended to harm anyone.

In Khan’s case, in 2003, he was 18, homeless, had dropped out of high school,  and felt confused about his future, when he agreed to participate in a crime.  With two others, plus a last minute recruit as a getaway driver named Rick Page, whom Khan barely knew, Khan agreed to help rob the group’s mutual marijuana dealer, a good-looking 19-year-old with a nice smile, named Kevin Leonard McNutt.

The idea was reportedly to pretend to make a drug deal with McNutt, then grab the drugs and run. But after McNutt insisted on doing the transition in Page’s van, instead of out in the open, the plan began to go south.  Suddenly, instead of letting Khan do his grab-and-run,  Page got out of the van with McNutt,  and began hitting the young dealer.  At the time, no one reportedly recognized that the unplanned “punches’ were done with a knife.

Page was stabbing McNutt to death in what was later believed to be some kind of rage induced by a combination of mental illness, and going off his meds.

Khan was arrested at 2 a.m. the next morning.  When he learned McNutt had died, he began crying hysterically.  Several hours later, he was charged with robbery and murder.

He had been living in Antioch, California, so was taken to the Contra Costa County jail where, a few days later still, he received a stapled copy of the felony murder statute.

“The language was confusing,” Khan would write a decade and a half later.  “And I found myself looking up words in each sentence. After decoding it, I realized that because I committed a robbery, I was equally guilty of the murder. Reality settled in.”

After four years in jail, Khan’s trial took place.  He was found guilty, sentenced to 25 years to life, and sent to a maximum security Level 4, California prison. Around eight years and another prison later, he finally landed in San Quentin which had much better programs for its inmates.  Desperate to do something “positive,” he began taking every class he could find, mentored other inmates, and eventually became the co-founder of Re:store Justice, which would become the main sponsor of SB1437.

He also founded FirstWatch, a video series that tells the stories of life inside San Quentin, and which  launched the essay program.  Khan is the chairman of SQUIRES, an unusual program that allows local kids to come into the prison.

“We, the incarcerated men, share and listen to life stories and feelings, empowering the youth and deterring them from making similar harmful choices we’ve already made,” Khan said of that program, which is one of his favorites.

And then thee is Re:store Justice, through which Khan and other San Quentin inmates work in partnership with survivors of crime, district attorneys, CDCR officials, and various community members to, as the website puts it,  “re-imagine and reform our criminal justice system to be one of true inclusion and justice.”

On Christmas Day 2018, Khan’s work to change his life, and the lives of others, paid off:  former Governor Jerry Brown commuted Khan’s sentence from 25-to-life to 15-to-life, years that he had already served, meaning Khan would now be eligible for parole.

But his opportunity for re-sentencing came first.

“I understand that my actions on Monday, March 24, 2003, created lifelong grief for the McNutt family and nothing that I can do will change the results of that callous act,” Khan wrote in his commutation application. “If given the opportunity to re enter society, I will live a life of service with the purpose of preventing and deterring crime and increasing public safety for our communities.”

Easy words to say, of course.

Yet, corrections officers who got to know Khan seemed to agree, according to the former governor’s commutation statement.  One corrections officer who wrote Brown, praised Khan for his “dedication” to mentoring young people. “I truly believe Mr. Khan serves us far better in our communities, not in our prisons,” the CO wrote.

“I am aware of the crime Mr. Khan has committed,” he wrote. “And I believe it does not serve the State, nor society a purpose to keep him in prison an extra decade. I am writing in strong support of Mr. Khan’s commutation and hope you will consider giving him a second chance that I know he has worked incredibly hard for.”

Even Contra Costa District Attorney Diana Becton was among those who favored Khan’s release.

“Our office recognizes the severity of the crime and the trauma he has inflicted on the family of the victim,” Becton wrote to Brown. “But given the specific facts and circumstances of this case, we believe justice would be served by granting clemency.”

Becton’s office made clear it did not oppose Khan’s  re-sentencing motion on Friday.

To the contrary.  “As prosecutors, we too must adapt our sense of fundamental fairness to reflect what is right, and what is just,” DA Becton said in a statement released after Khan’s morning hearing.

Kevin McNutt’s mother was reportedly not in favor if Khan’s release. She told ABC7 by phone that she “does not believe in the justice system.”

We’ll tell you more about King’s life and his case soon.

In the meantime, we have just published a different perspective of Khan’s release written by Rebecca Weiker, who is the Program Director for Re:store Justice, whose work is informed by the fact that she also a crime survivor; her sister Wendy was murdered in 1992.

We think you’ll find her story to be important reading.