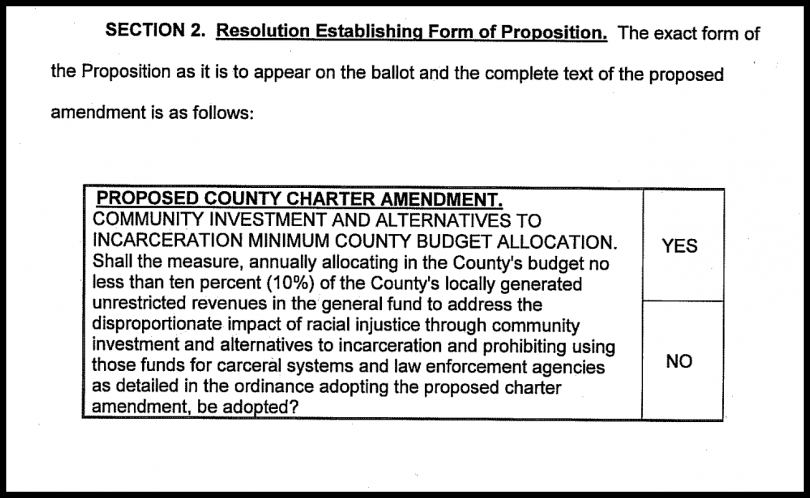 Last week, on July 21, LA County’s Board of Supervisors voted 4-1 in favor of moving forward with a hotly debated ordinance focused on “reimagining” LA County by asking voters to dedicate a guaranteed percentage of the budget for community programs and decarceration-focused initiatives focused on “addressing the disproportionate impact of racial injustice.”

Thus, the supes started the process of getting a Charter Amendment on the November ballot that, if passed, will set aside at least 10 percent of the county’s “generated unrestricted revenues” starting in fiscal year 2024-2025, and then direct that money toward community investment and toward alternatives to incarceration. According to LA County CEO Sachi Hamai, this currently equates to about $360 million.

That money, if the supervisors — and then the voters — move forward with the plan, will fund things like job development, youth programs, advancing black-owned businesses, housing and health care services, pretrial diversion, mental health and substance use programs, and other services. The supervisors, whose job it is to create the budget each year, would not be able to spend the money on the LA County Sheriff’s Department, Probation, or the District Attorney’s Office.

The proposed ordinance, authored by Supervisors Sheila Kuehl and Hilda Solis, and which appeared last-minute on the supplemental agenda last week, directs CEO Sachi Hamai and County Counsel to work together to get the necessary Charter Amendment on the November 2020 ballot.

The board will conduct a third and final reading next Tuesday, August 4, at which point the supes are expected to vote in favor of asking LA County residents to tie 10 percent of the general fund to reimagining justice by boosting community health in LA County.

“This is a moment in time when people are saying to us, ‘Why is every solution [to societal issues] wearing a uniform and carrying a weapon?'” said Supervisor Sheila Kuehl, during the special meeting on July 24, to discuss the proposed Charter Amendment.

Isaac Bryan, who founded and leads the UCLA Black Policy Project, praised the supervisors for their efforts to bring lasting change to the county. To Supervisor Mark Ridley-Thomas, he said, “We don’t have words to adequately describe what your leadership has meant for black lives the last four decades. We would not be here without you.”

“The Reimagine LA Charter,” Bryan said, “is not a symbolic gesture. The workgroup and so many other foundational policy decisions led us to this moment. We have models and frameworks. We really need to move beyond the systems that have exacerbated inequality in our country for decades.”

“We can’t be so blinded by the allure of progress that we forget what justice looks like.”

Speaking on behalf of the West Hollywood City Council, the city’s mayor, Leslie Horvath, also spoke in support of the motions. “We believe it is time,” the mayor said, for the county to commit to “investing in caring supportive services for our residents most in need.”

Echoing the thoughts he expressed at the board meeting, and on social media last week, Sheriff Alex Villanueva called the motion’s title “deceptive.”

“You’re not saying in the title that you’re going to be defunding law enforcement, prosecutors, and the public safety of LA County.”

The sheriff went on to list the various larger budgets of other LA County departments in comparison to the LASD budget.

“To use the word ‘defunding’ about law enforcement when they continue to get huge amounts of money even when this is passed? I would call it right-sizing. To the people of LA County, would you like this to be a longer term investment?”

As was the case last week, a portion of those who spoke to the board this Tuesday expressed frustration that the series of motions were hastily introduced without planning or public notice.

Roselle Rodarte, of the group California Contract Cities First, said her organization was most concerned about not including community groups like theirs in the process leading up to the introduction of the charter amendment motion. “If you value the partnership you have with your communities … why haven’t we been included in the process? You have the opportunity to create meaningful change that’s important to the people you were elected to represent. Don’t miss this opportunity to slow it down and let all voices be heard.”

Despite comments to the contrary from the Times and from other speakers, Eunisses Hernandez, co-director of La Defensa and member of JusticeLA, argued that “this is not a rushed process.” If voters pass the amendment, she said, there will be opportunities for stakeholders to have a say during the phase-in process between July 2021 and July 2024. “I strongly support the board moving forward to give the voters the opportunity to put more clearly in our charter health and equity, instead of incarceration and policing.”

Michelle Hanisee, President of the Association of Deputy District Attorneys (ADDA) told the board she believed the proposed action would violate the California constitution, and state law, both of which she said ban the supervisors from “delegating away this board’s control of the budget. That is one of the many reasons I oppose it.”

The supervisors (minus Barger), Hanisee said in a statement on Friday, “are pushing this ballot initiative despite the fact they have the present ability to allocate any amount they want to these same programs on their own authority.”

LA County’s deputy union had its lawyers send a letter to the board, to County Counsel, and to CEO Sachi Hamai. “I want to make it perfectly clear,” said Ron Hernandez, president of the Association for Los Angeles Deputy Sheriffs. “We are in no way challenging the funds for the programs, but the process.”

In the letter, the union’s lawyers stated that the supervisors were in violation of an ordinance that requires county officials to consult with labor unions and also to give the unions 90 days notice of any changes to the charter.

ALADS, along with the ADDA, the California Contract Cities Association, the League of California Cities, the Coalition of Probation Unions, and the City of Calabasas are “prepared to launch legal action on the groups of procedural and legal issues with the charter amendment,” the ADDA’s Hanisee wrote in an emailed statement.

When it was her turn to address the other board members, Supervisor Kathryn Barger said she didn’t believe the budget move her colleagues were proposing was legal.

“The board deliberates, debates and decides on how resources are spent during our budget process and throughout the year based on the needs,” said Barger. “The top issues from five years ago are not the issues of today, nor will today’s issues be reflective of what we will see in the next 15 years, going way into the future.” Barger urged her colleagues not to “delegate” the “tough decisions” the supervisors were elected to make.

The board and county, she said, were already taking urgently needed actions to reallocate funds toward justice system reforms.

Kuehl praised Barger’s “brave” speech, but disagreed that the Charter Amendment would be in violation of any laws.

“I listened very carefully to the opinion and statements of our County Counsel, who I think is one of the best in the state, if not in the United States.” County Counsel Mary Wickham pointed out that the county is constantly being sued for all sorts of things, including cases involving allegations of deputies using excessive force, which Kuehl said cost the county $45 million last year. “To make any kind of statement” like “this is unconstitutional, and this is against the law, and this violates labor law — I’m sorry, none of that is accurate.”

The allocation of that 10 percent of the general fund would still be “within the discretion of the board.” The amendment includes a caveat that would allow the board to use the money for other purposes in the event of a fiscal emergency.

Kuehl also responded to Barger’s assertion that county priorities would shift in coming years, and thus the general fund dollars should not be chained to any one current need.

“These are not just words to us. The fear is that they may just be words in a decade to a brand new board,” said Kuehl. “I do think that it is appropriate to say to the people of Los Angeles County: ‘Would you like this to be a longer-term investment than just when Kuehl’s there, or Hahn is there, or Barger is there, or Solis is there, or Ridley-Thomas, who is thermed out at the end of this year” is there?'”

“Let’s not let a year go by without making changes to our budget that more clearly align with our values, and with the needs of our most vulnerable constituents,” Ridley-Thomas said.

The county’s work to reimagine LA County “should be consistent with the priorities outlined in the charter amendment before us,” he said. “A reimagining that de-emphasizes the punitive system and reemphasizes the rehabilitative and restorative. A reimagining that truly prioritizes community health and wellbeing.” Ridley-Thomas urged the board to “move swiftly to advance these funding priorities now.”