As many readers are aware, WitnessLA has been publishing a series of essays written through the FirstWatch project at San Quentin State Prison.  The two authors of the essays, Adnan Khan and James King, are also San Quentin inmates who aim with their writing to, as they put it, explore “the connections, challenges, and intimacies between self, society, and incarceration.”

In the essay below, Adnan Kahn probes the effect of “objectifying” language in prison, and the possible changes a different use of language might bring.

On his way back to his housing unit one day, my FirstWatch teammate Eric “Maserati E” told me he was pulled over and searched for a random pat-down. A Correctional Officer (C.O.) told Eric to put his hands on the wall as the officer took items from Eric’s pockets. The other officers stood close by and watched. Once the random stop and frisk was over, the C.O. handed back the few items Eric had in his pockets (identification card, pens, guitar pick, and a couple of FirstWatch and Re:store Justice stickers). The CO. asked Eric what the stickers were about and once Eric informed him, Eric offered the C.O. the stickers and said “here you go man, support the project!” Unfortunately, the C.O. was not receptive. He not only rejected the stickers, but told Eric “I don’t support anything you inmates do.”

“What are you then?” the C.O. asked, which seemed to Eric as more of a challenge than a genuine question. 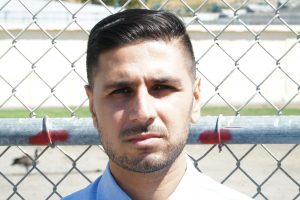 Eric collected his belongings. “Well I consider myself a human being,” he said,  “and I’m sorry you feel that way.”

The C.O. responded by saying, “I’m sorry you feel that way.”

Eric looked at him and the other C.O.’s who were standing there. “Alright, well, God Bless y’all,” he said, as he proceeded to go into his housing unit. The other C.O.’s who stood by had mixed responses. One looked on, one nodded, and one replied “God bless you too.”

I’ve found accounts like Eric’s to be common occurrences in prison. The verbal abuse can also come from paid prison staff or volunteers. These examples are not limited to people working in prisons, but are extensions linked to the biases of society at large. I believe there is a toxic culture of acceptable language that is the driving force behind the objectification of people who are incarcerated. What people largely associate with terms such as “inmate”, “convict” or “felon”, is a dangerous monster capable of random harm. That is what generally comes to people’s minds.

I believe a new popular vocabulary should replace the current language around prison and people in prison. I believe this can encourage critical thinking and reshape the roles between human beings, incarcerated and otherwise.

New vernacular can allow us to reflect and reconsider the humanity of people in prison; the funny brothers, loving fathers and caring daughters who get smothered when they are placed beneath these offensive labels. This could help us, human beings who are incarcerated, toward a healthy recovery, safer learning environments, and an eager return to a much more welcoming society.

I believe using humanizing language is one of several starting points in approaching a new justice system that works towards healing rather than punishing. It’s much easier to heal a human, just as it is much easier to punish an “inmate”.