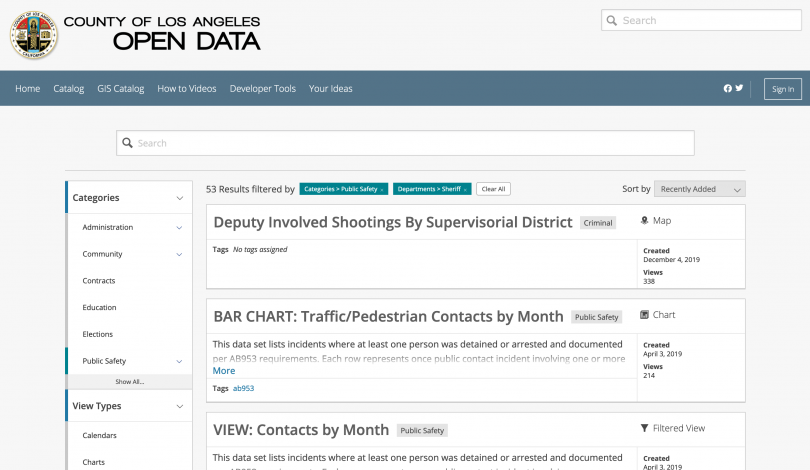 While the county has made important progress over the last decade to increase data collection and dissemination, through the Open Data portal launched in 2015, there are many things we don’t know about LA’s criminal justice system and the outcomes it produces.

On Tuesday, the Los Angeles County Board of Supervisors voted unanimously in favor of two motions intended to push the county toward greater transparency around local criminal justice statistics. These motions align with the supervisors’ efforts to build a “care-first, jail-last,” justice system, and an anti-racist county policy agenda.

The first motion, by Supervisors Sheila Kuehl and Hilda Solis, is focused on collecting data regarding pretrial detention and release during the coronavirus crisis. Approximately 46 percent of the county jail population is comprised of individuals who have not been found guilty of a crime, but who are awaiting trial.

In order to reduce the likelihood that coronavirus would slam LA County’s jail system, LA’s justice system leaders and the superior court worked together to reduce the county’s incarcerated population by 5,000 people — from 17,002 at the end of January to 12,026 by June. The pretrial population was reduced by approximately 2,000 during this time.

The overall jail population reduction was rapid and “unprecedented,” Supervisors Sheila Kuehl and Hilda Solis wrote in their motion. These efforts, plus state and county-level “zero bail” schedules in response to the pandemic, and new reforms that include a pretrial pilot program and a court date reminder system are responsible for reducing the number of people held in jail while they await trial. But more data is necessary in order to determine how well these reforms are working, so that the county can successfully maintain a reduced jail population.

Thus, Tuesday’s motion directs the CEO’s Office to work with county criminal justice agencies and departments to compare the state of pretrial detention in LA County before and after the coronavirus crisis arrived.

Under that umbrella, the supes want to see data on pretrial risk assessments, failure-to-appear rates since the pandemic began, and outcomes for defendants during and after adjudication during the pandemic. The county will also look at what services justice system-involved Angelenos received, including court reminder calls, transportation to court, and connection with the Office of Diversion and Reentry (ODR).

These datasets will be broken down by charges, type of release (whether via cash bail, the state-wide emergency bail schedule, if they were released on their own recognizance, etc.), race, gender, and age.

The motion calls for the CEO to report back to the board in 270 days, with quarterly updates to follow.

The second motion, by Supervisors Kuehl and Mark Ridley-Thomas, calls for the creation of a Criminal Justice Data Sharing Initiative to collect and publicly release data about LA County’s justice-involved population “with the appropriate privacy protections.”

To “even begin to meet” demands for changes to public safety and justice in LA County, with particular attention on the ways the system “serves to … oppress Black, Indigenous, and other people of color,” Kuehl and MRT wrote, the county must have comprehensive — and publicly accessible — data.

With the passage of this latest motion, county departments will gather and report “easily accessible” data regarding incarceration, probation, mental health, use-of-force, prosecution, and diversion. The numbers will be broken down by race, gender, age and other demographic features. 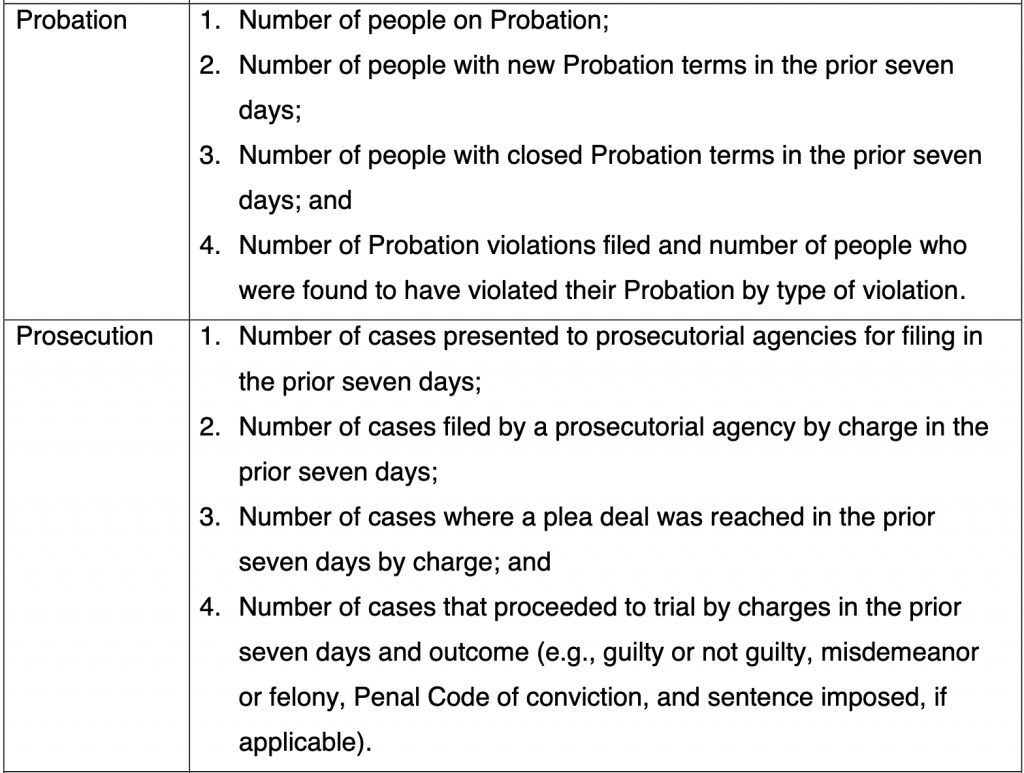 Two of eight categories of data to be collected through the new initiative.

Comprehensive data-gathering, “is necessary for smart policy reform,” Kuehl said. It allows the board “to make informed and cost-effective policies” — which is “important in any budget year, but especially in those like we face today.”

“We’ve moved 5,000 people out of the jail into [Office of Diversion and Reentry] programs,” she said. “We want to know: where are they? Have they been helped?”

“Publicly accessible data,” said Kuehl, “allows all of our community members, as well, to understand these outcomes and to participate in crafting policies that are responsive to needs.”

The short-term “revitalization” of the county’s Open Data portal with easily accessible data points, will be followed with long-term solutions as county stakeholders consult with experts to “develop an even more robust data sharing proposal,” Kuehl said.

LA County’s “need for better data becomes ever more clear and urgent as the county works to strengthen law enforcement accountability, alternatives to incarceration, probation oversight, youth justice reform, and the implementation of other reforms,” Ridley-Thomas said. The data will also work as a “thermometer for ensuring the successful development and implementation of an anti-racist policy agenda for this county.”

When it was his turn to address the board, Sheriff Alex Villanueva told the supes that his “concern with these motions” was that the data gathering is focused on the “justice impacted population,” yet “none of them say anything about what happens to the victims,” who are “involuntarily involved in the criminal justice system,” and who “suffer horrendous things, up to and including death.”

“The board,” Villanueva said, “has elected not to really talk about victims of crime or represent victims in the criminal justice system, I am here to represent” them.

Before the sheriff could finish his next sentence, Ridley-Thomas interjected.

“I take exception to that,” the supervisor said.

“Sir, you can take all the exception you want,” said Villanueva.

“I just did,” said Ridley-Thomas. “Your check on the board for not representing victims is uncalled for, and it shouldn’t stand without being challenged.”

“You can challenge it all you want, sir,” the sheriff said. “Where is the data collection on victims? I don’t see it on item three or four. In fact, it is absent from the conversation.”

“I would be more than happy to support if you create a board motion to discuss victims of crime and their plight in the criminal justice system,” said Villanueva. “I will support you 100 percent, Supervisor Ridley-Thomas.”

A friendly amendment from Supervisor Kathryn Barger did, in fact, add victim statistics to the list of datasets that will be collected thanks to Tuesday’s motion. The county will gather information on crime victims and how the county served those victims in the wake of the crime.

“I think there is sometimes a misguided idea that the board does not care about victims,” Kuehl said, pointing to rewards offered for information on violent crimes, and public health centers and services geared toward victims. “I wholeheartedly support this amendment.”

Bill Keho, the CIO within the CEO’s Strategic Integration Division, told the board of his office’s plans for Open Data 2.0, which will include working with both internal and external stakeholders” to create “a road map that takes open data to the next level” to provide “more value to LA County departments and to the public.”

“This motion,” Keho said, “will jumpstart that vision.”