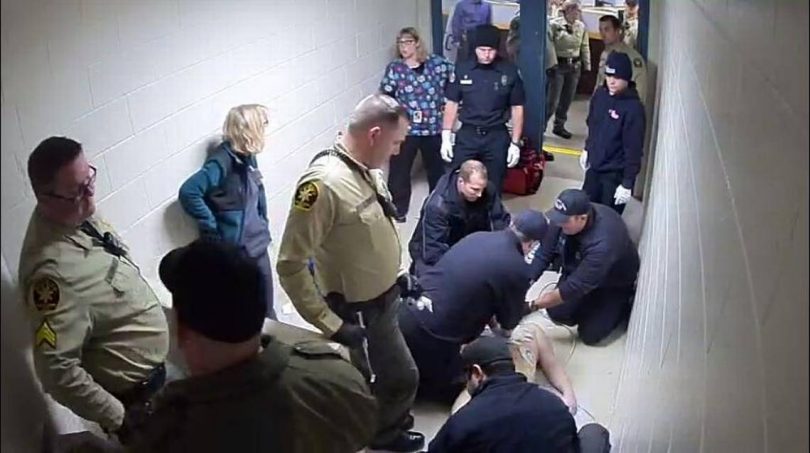 On Monday of this week, 48 hours of protests outside the San Luis Obispo courthouse finally ended. The emotional demonstrations, which featured demonstrators taking turns being strapped into a faux restraint chair, followed the release of a disturbing video showing the last hours and minutes of the life of Andrew Holland, who last year had been bound naked in a restraint chair with minimal food and water for 46 hours in the San Luis Obispo County Jail. A part of the video shows SLO sheriff’s deputies in the jail watching as Holland, who had by then been released from the chair and shoved into a nearby cell, writhed on the floor of the second cell, struggling to breathe. Holland eventually lost consciousness, and died. Some of deputies were captured laughing nervously at several points throughout the footage.

The January 22, 2017, death of Holland, who showed symptoms of schizophrenia, and the video released last week, resulted in a record $5 million legal settlement by the county with Holland’s family, and has prompted a new round of questions about the fact that California jails are facing a sharp increase in the number of mentally ill inmates who wind up in cells rather than in treatment.

The size of the crisis

According to the non-profit Treatment Advocacy Center, in 2016, nearly 400,000 mentally ill inmates filled the nation’s jails and prisons.

Individuals with psychiatric diseases like schizophrenia and bipolar disorder, according to the Treatment Advocacy Center, are 10 times more likely to be in a jail or prison than a hospital bed.

In Los Angeles County alone, according to a statement from LA County Sheriff’s Department spokesperson, Nicole Nishida, as of Tuesday of this week, 5,064 mentally ill inmates reside in the county’s jail system.

“Over half the adults in this country with a mental illness, and over 90 percent of adults with a substance use disorder, did not receive treatment in the last year, and too many end up in the criminal justice system by default,” said Krinsky.

In an effort to get some kind of a handle on the situation, Krinsky’s organization, together with New York University Center on the Administration of Criminal Law, organized a gathering of criminal justice experts and elected prosecutors from all over the U.S. who are meeting this week in Miami, FLA, to discuss ideas, obstacles, and reforms concerning the intersection of mental health issues and the criminal justice system.

Over the two-day “convening,” the district and state attorneys, including two from California, are touring treatment facilities to learn about Miami’s Criminal Mental Health Project (CMHP), which is considered to be particularly innovative, and also to discuss innovative programs nation-wide.

“It is heartening to see elected prosecutors, law enforcement, and justice system leaders coming to terms with this problem,” said Krinsky, “and working collaboratively to promote smarter solutions that do right by the individual, while also promoting public health and safety.”

Many of the innovations in Miami are credited to the influence of Miami-Dade County Eleventh Circuit Judge Steven Leifman, a long-time champion of creating more effective responses to mental illness within the justice system.

“In Miami-Dade we have created a national model that seeks to divert individuals with serious mental health issues from the criminal justice system to community-based treatment and support services,” said Judge Leifman in advance of the gathering of prosecutors.

“Our work has resulted in substantial decreases in incarceration in the county, including the closure of an entire jail at a cost-savings to taxpayers of $12 million per year,” he said.

Much of the reason d’être of this week’s national gathering of prosecutors is the hope that officials will take away concrete, locally applicable reforms they can adopt to improve mental health treatment in their home districts.

Los Angeles too has been working on the problem. For instance:

In January of last year, the LA County Board of Supervisors voted unanimously to expand funding to the Los Angeles County Sheriff Department’s Mental Evaluation Teams, allowing them to expand the number of teams from 15 to 23, and also to add a “triage desk” that can field calls from community members.

(The LASD was the first law enforcement agency in the Los Angeles area to create such teams in 1993.)

In the spring of 2016, Los Angeles Superior Court Judge Peter Espinoza retired from court to head up the county’s Office of Diversion and Reentry. The office, which was created by a motion by Supervisors Sheila Kuehl and Mark Ridley-Ridkey-Thomas, in part based on a report from District Attorney Jackie Lacey, addresses—among other mental illness-related issues—the difficulties of releasing mentally ill inmates from the county’s jails, and placing them in treatment.

Then in June of last year, the county received $20 million from the state to help rehabilitate those struggling with mental health and substance abuse problems who are being released from jail or prison.

The funds, which came from savings under Proposition 47, are being aimed community-based organizations that provide mental health and substance abuse services, according to Judge Espinoza, whose says the primary mission of his Office of Diversion and Reentry is to “reduce the number of inmates in the LA County jail system who suffer from a serious and chronic mental illness or a substance abuse disorder, or a combination of the two.” A high percentage of his office’s clients, he said, live in poverty and have experienced years of homelessness.

Yet, despite these and other steps, everyone involved in LA and in Miami, admits that these are only beginning steps in the direction of conquering one of the nation’s largest and most pressing dilemmas.