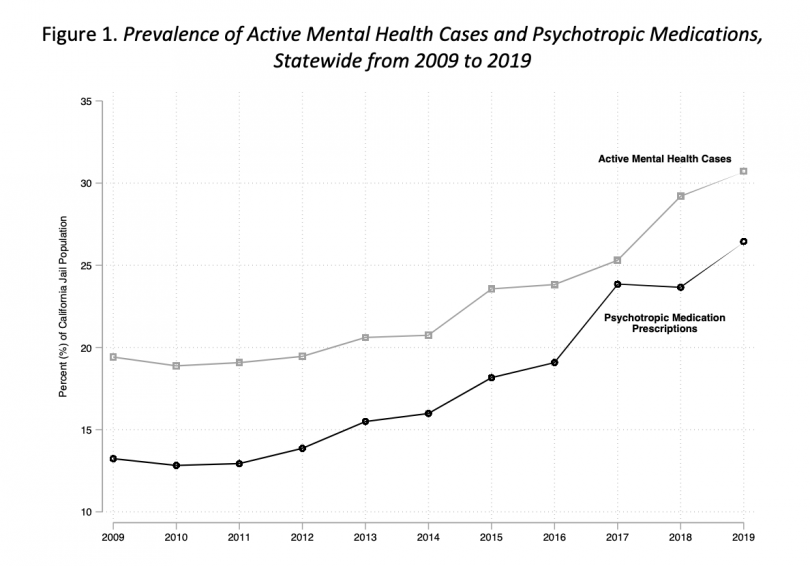 The proportion of people in California jails suffering from mental illness rose 63 percent over the ten-year period between 2009 and 2019, according to a new brief by California Health Policy Strategies.

The number of people prescribed psychotropic medications inside jails increased at similar rates: in 2009, 10,500 of the average daily population received the medications, growing to a group of 19,000 by 2019, Franco found.

As of June 2019, there were 5,544 people who were either held in mental health housing units, taking psychotropic medications, or both, in LA County jails — or about 30 percent of the total jail population. LA County’s Twin Towers Jail, where most of the mentally ill are housed, is considered the nation’s largest mental health facility.

Recently, an analysis from the RAND Corporation determined that at least 61 percent (3,386) of those people could be safely released into community-based care.

In Kern and Santa Clara County, open mental health cases soared above 85 percent of the population. Approximately 42 percent of San Francisco’s jailed individuals and 45 percent of those in San Diego County lockups had an active case. The rural counties of Trinity and San Benito had lower than 20 percent, by comparison.

The issue of expanding mental health needs inside jails is one of great import, as it reflects a growing need for diversion and alternatives to incarceration for seriously mentally ill individuals.

Yet, people experiencing mental health issues spend more time behind bars than those without. People with diagnosed mental illnesses are sentenced to 12 percent longer stints in prison than their peers without mental health diagnoses, according to a 2017 Stanford report.

Data shows that people with mental illnesses are more likely to be sent to solitary confinement — which often exacerbates mental illness — and also experience higher rates of violent and sexual victimization and suicide.

The report pointed to several factors that could be impacting the statewide increase in the jailing of mentally ill Californians, including 2011’s prison realignment (AB 109), which shifted the incarceration burden for people convicted of certain low-level offenses away from the state prison system to CA’s 58 counties.) Other contributing factors could be the state’s worsening homeless crisis, and the growing number of defendants found incompetent to stand trial. Additionally, county jails’ improved identification and diagnosis of mentally ill individuals could play a part in the shifting numbers, according to the report.

Improvements in the consistency and accuracy of these reported statistics, according to the report.

In the course of his research, Franco found that statewide jail data is often incomplete. Local law enforcement agencies conduct their own counts and self-report their numbers — or not — to the BSCC. Marin, Sacramento, Riverside, and San Diego often failed to turn in their numbers. San Joaquin, Lassen, Marin, and Tulare chose not to turn in jail survey data 50 percent of the time.

Additionally, counties turned in data that was obviously incorrect at least 30 times. These instances included mental health case counts that were higher than the county’s total jail population.

“Jails are facing a growing crisis as the proportion of incarcerated individuals with serious mental illness continues to rise,” Franco wrote. “State and local policymakers are working to confront the problem, but the need for accurate data is critical.” Counties and the BSCC can and must do a better job of gathering and reporting this crucial data.