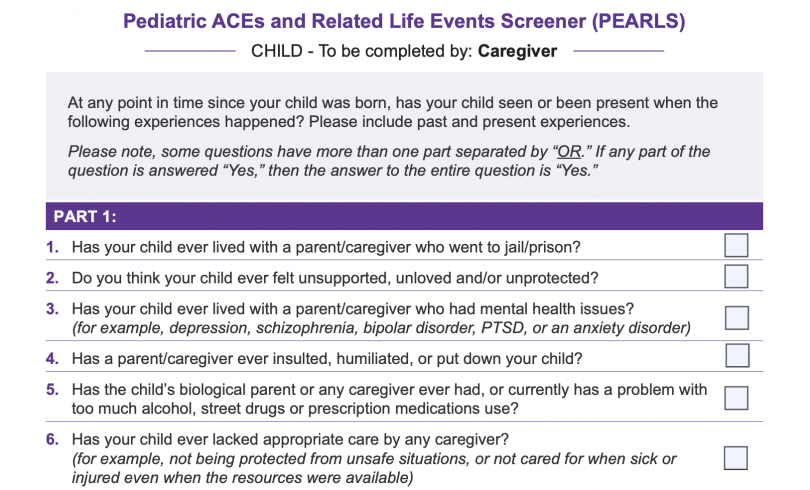 Starting this year, routine pediatric visits for millions of California children could involve questions about touchy family topics, such as divorce, unstable housing or a parent who struggles with alcoholism.

California now will pay doctors to screen patients for traumatic events known as adverse childhood experiences, or ACEs, if the patient is covered by Medi-Cal — the state’s version of Medicaid for low-income families.

The screening program is rooted in decades of research that suggests children who endure sustained stress in their day-to-day lives undergo biochemical changes to their brains and bodies that can dramatically increase their risk of developing serious health problems, including heart disease, asthma, depression and cancer.

Health and welfare advocates hope that widespread screening of children for ACEs, accompanied by early intervention, will help reduce the ongoing stresses and skirt the onset of physical illness, or at least ensure an illness is treated.

The higher the number of such adverse events — and so, the higher a child’s ACEs “score” — the higher the risk of chronic illness and premature death. About 63% of Californians have experienced at least one adverse childhood event, and nearly 18% have faced four or more, according to state health officials.

California is the first state to create a formal reimbursement strategy for ACEs screening, and the program will be open to both children and adults enrolled in Medi-Cal. The initiative is part of a larger ACEs awareness campaign championed by the state’s first surgeon general, Dr. Nadine Burke Harris, who is a national leader in the ACEs movement.

The public health impact could be significant as Medi-Cal covers 5.3 million kids — roughly 40% of all California children — and 6.3 million adults.

“It is a profound shift that’s going to change the type of prevention and management we do with families,” said Dr. Dayna Long, a pediatrician who is director of the Center for Child and Community Health at UCSF Benioff Children’s Hospital Oakland and helped develop the state-approved screening tool for children and teens. “We’re not going to make all the hard things go away, but we can help families build resilience and reduce stress.”

At a typical well-child visit, parents or caregivers will be asked to fill out a state-approved questionnaire about potentially stressful experiences in their children’s lives. For children under age 12, caregivers fill out the survey. Young people ages 12-19 will complete their own questionnaire in addition to their caregivers’ questionnaire.

The questions will touch on 10 categories of adversity spanning the first 18 years of life: physical, emotional or sexual abuse; physical or emotional neglect; and experiences that could indicate household dysfunction, such as a parent who has a serious mental illness or addiction, having parents who are incarcerated or living in a home with domestic violence.

The screening will measure for experiences that could regularly trigger fear and anxiety, including homelessness, not having enough food or the right kinds of food, and growing up in a neighborhood marred by drugs and violence.

Long acknowledged some caregivers and children might be reluctant or unwilling to disclose sensitive information, particularly if they fear shame or repercussions. “We acknowledge it takes time to build trust,” she said. “But we want to encourage families to have hard conversations with their doctors and to understand how stressful events over the life of the child are impacting that child’s health.”

Physicians will review the responses and discuss them with caregivers during the visit. Doctors will have access to free online training on how to communicate with families and connect them to community resources. Physicians will be eligible for a $29 reimbursement for each Medi-Cal patient screened.

The responses are considered confidential patient information and won’t be shared with state officials. But researchers hope that aggregated information will be studied to improve care for patients with high ACEs scores.

2. The screenings are voluntary.

Doctors do not need to offer them, and patients and their caregivers do not have to participate. Doctors will need to complete online training before they can be paid for screening patients. The state will cover the costs of screening once a year for children and once in a lifetime for adults. But children are the main focus of the screening campaign.

3. What happens after the screening is less clear.

Community clinics often have social workers or “navigators” available to connect families to aid like food stamps or counseling. Doctors in private practice, however, are less likely to have those resources, said Dr. Eric Ball, an Orange County pediatrician who served on a committee advising the surgeon general on the ACEs campaign. Ball said local chapters of the American Academy of Pediatrics will work to educate doctors on how to help children who register high ACEs scores, because social services vary so much by county.

Doctors “are not going to get rich doing ACEs screenings, that’s not the point,” Ball said. “If we can pick up kids at higher risk for these issues down the road and mitigate it, that’s really exciting to me.”

4. Researchers aren’t yet sure which interventions will best help kids with high ACEs scores.

Long and her UCSF Benioff colleagues are continuing to study how well the ACEs screening works and what interventions might be most effective. It’s one thing to help hungry families sign up for food stamps and free school lunches. It’s less clear how to help a child whose parent is in prison. Researchers have identified protective factors that can help children better resist the effects of toxic stress, including nurturing relationships with trusted adults, such as grandparents or teachers.

“The fact of screening is also an intervention,” Long said. “Being able to sit in a room with a pediatrician is not going to make those hard experiences go away, but it creates a freedom to talk about some things that are solvable. That’s therapeutic in and of itself.”

5. Not everyone agrees that widespread ACEs screening is a good idea.

Sociologist David Finkelhor, director of the Crimes against Children Research Center at the University of New Hampshire, is among those who caution that universal screening for ACEs is premature, given there is little consensus about the potential negative effects of screening or the best interventions.

“The good news is that we are focusing on these adversities that are clearly the source of so many downstream health and mental health problems,” Finkelhor said. “But the bad news is we’re moving way too fast, before we know how to best conduct this kind of screening and intervention, and we could get it wrong with pretty disastrous consequences.”

“Mostly, we don’t know what to do with somebody who has a high ACE score,” he said. “There are already long waits to get into family counseling or child mental health programs.”

For example, a doctor might be legally required to report previous abuse to authorities, upending a family even if the child no longer is exposed to the abuser, Finkelhor said.

“These are tough questions,” Long of UCSF acknowledged. Still, she said, screening is important, because it encourages physicians to engage in difficult conversations they might not otherwise have and pushes clinics to create links to supportive services and resources.

“That is the next phase, and that is important,” Long said. “We’re doing this because we care about your child and want them to grow into healthy adults.”

Kaiser Health News (KHN) is a national health policy news service. It is an editorially independent program of the Henry J. Kaiser Family Foundation which is not affiliated with Kaiser Permanente.