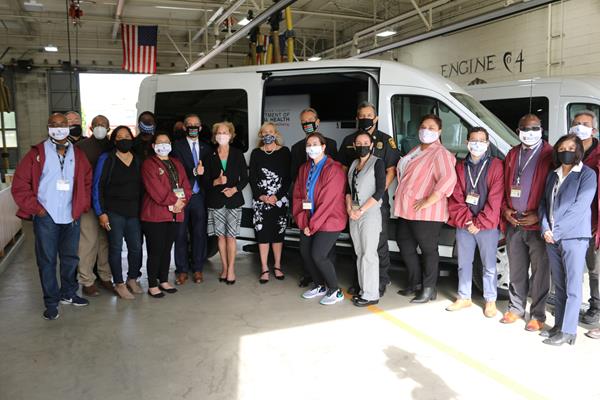 Through the first motion, the county will co-sponsor AB 988, a bill to adopt “988” as an alternative to calling “911” for mental health emergency services.

Existing California law requires all local police agencies to use “911” as their primary emergency line, but in 2020, federal lawmakers enacted the National Suicide Hotline Designation Act, which will set “988” as the national suicide prevention and mental health crisis hotline.

States are required to implement this system by July 16, 2022. Under California’s AB 988, the state would formally adopt the federally required program immediately — as an urgency statute.

Currently, the national suicide and mental health hotline is an “underutilized, hard-to-remember ten-digit” phone number. The issue is made all the more urgent by the pandemic, during which suicide prevention call centers have reported increased call volume.

The new mental health line, “is going to be a game-changer,” said Supervisor Janice Hahn who co-authored the motion to co-sponsor AB 988 with Supervisor Kathryn Barger. “Everyone knows to call 911 in an emergency when they need the police or an ambulance, and now we’re going to have an equivalent, easy-to-remember, three-digit phone number dedicated solely to mental health emergencies.”

AB 988 is titled the “Miles Hall Lifeline Act,” in honor of a 23-year-old Black man killed by police officers in 2019 while he was experiencing a mental health crisis.

The bill, authored by five Assemblymembers notes that “overreliance on law enforcement responses to a public health crisis, approximately 25 percent of all fatal police-involved shootings since 2015 involved a mental illness, with Black men dying disproportionately.”

Despite some important steps toward reform, “the current system relies on law enforcement and confinement and puts people suffering from mental illness through an expensive and traumatizing revolving-door as they shuttle between jails, emergency rooms, and the street,” said Assemblymember Bauer-Kahan.

One model gaining traction across the country is Eugene, Oregon’s much-lauded alternative crisis response system, CAHOOTS (Crisis Assistance Helping Out On The Streets).

AB 988 authors noted that out of the 24,000 calls that CAHOOTS answered in 2019, teams only called for police backup 150 times. The program has offered people experiencing mental health crises law enforcement-free emergency assistance for three decades, is estimated to save the city approximately $8.5 million per year.

Through AB 988, state officials will be able to begin structuring the 988 network and services, ensuring it’s connected with 911, so that the two emergency systems work in tandem. The 988 system will work as ‘”air traffic control” for connected crisis services in their region,” Hahn and Barger write in their motion.

By co-sponsoring AB 988, county officials’ feedback about the system “will be incorporated in its design,” according to the motion.

Because this system will not be in place until summer 2022, Supervisor Hahn introduced a second motion focused on “doing something now” to address the fact that the county has “too many call centers that basically exist in silos and operate separately from each other.”

“Back in September,” Hahn said, “we broke down one of those silos by directing the Department of Mental Health to establish a direct line with the LA County Sheriff’s Department” so that 911 calls about mental health emergencies could be rerouted to DMH.

Tuesday’s motion took the streamlining effort a step further by directing the Department of Mental Health to establish another direct line to the Didi Hirsch national suicide prevention line. This way, Hahn said, “calls can be rerouted between the two as needed.”

“The Didi Hirsch counselors who operate the suicide prevention hotline are specifically trained to provide emotional support over the phone to people in suicidal crisis,” said Hahn. “But they don’t have the ability to dispatch psychiatric mobile response units. On the opposite end, our Department of Mental Health’s hotline can dispatch mobile response teams, but they don’t have the staff to provide the same type of emotional support” that Didi Hirsch does.