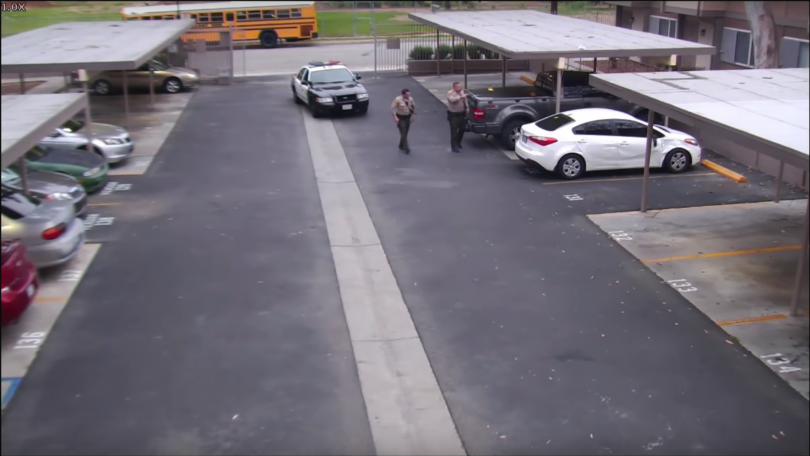 On June 6, 2019, two Los Angeles County deputies fired nearly three dozen rounds into a white Kia Forte as its driver reversed through an apartment complex parking lot in Willowbrook. While the passenger of the sedan, Daimeon Leffall, was not hit by the gunfire, the deputies killed the driver, Ryan Twyman, a 24-year-old father of three. Twyman and Leffall were both unarmed.

This week, the LA County Board of Supervisors approved a $3.9 million settlement to Twyman’s parents and children, and to Leffall. Supervisor Mark Ridley-Thomas called the “unusually large” settlement “no substitute for justice.”

“Beyond the wrongful death of Mr. Twyman and the costly settlement that is attached to it, a lasting consequence of this incident is the painful trauma and grief that it causes his family, his friends, and the community at large,” said Ridley-Thomas.

An" frameborder="0" allowfullscreen> LASD-narrated video of the shooting released on June 20, 2019, showed the two Century Station deputies pull into the parking lot, get out of their patrol car, and walk up behind Twyman’s parked car with their guns drawn. At this point, the sheriff’s department says that the deputies, then on either side of the vehicle, issued verbal commands for Twyman and Leffall to roll down the vehicle’s windows.

The officer on the passenger side “was unsure if the occupants inside the decedent’s vehicle heard the commands due to the window’s being rolled up,” according to LA County Counsel’s summary of the shooting.

That deputy opened the unlocked back passenger door of the car.

The video shows about 12 or 13 seconds of time between the deputies exiting their patrol car and the first deputy opening the door of the Kia, gun pointed inside.

Several seconds later, Twyman put the car in reverse, and backed it into the middle of the parking lot. The car’s open back door appeared to pull the deputy along.

The department’s incident video narrator said that the deputy was trying to maintain his balance and not get “knocked down and run over” when he and his partner began firing into the car. The deputy — who remained standing throughout — and his partner continued to fire, even after the first officer had gotten out of the way of the car, which continued to slowly reverse until it hit a carport support beam. At this point, the second deputy retrieved a rifle from the trunk of the patrol car and both deputies appeared to fire more rounds at Twyman and Leffall in the Kia.

According to the LASD, Twyman was on probation and was under investigation for possessing guns with a felony on his record. The department had been looking for Twyman to arrest him on the weapons charge after a search of the young man’s house turned up firearms. Twyman wasn’t home at the time of the search.

“At no time during the course of these events” did Twyman or Leffall “pose any reasonable or credible threat of violence” to the deputies, “nor did they do anything to justify the force used against them.” according to the complaint filed by the family’s lawyer, Brian Dunn, of the Cochran Firm California.  That force, the complaint alleged, was not only deadly, but also “excessive, unnecessary, and unlawful,” and in violation of the LASD’s policy against shooting into vehicles.
The Twyman family’s legal team also accused the deputies of “deliberate indifference,” by failing to render medical aid to the dying man, writing that “after a significant and appreciable period of time had passed following the shooting, Ryan Twyman died as a direct and proximate result of the gunshot wounds inflicted upon his person” by the defendants.

Twyman’s loved ones were also among a handful of grieving families who, speaking before the board of supervisors last year, reported taunting and intimidation from East LA and Century Station deputies at funerals and public memorials honoring people killed by members of the LASD.

On Tuesday, Supervisor Ridley-Thomas said the shooting and settlement pointed to the critical need for the “robust” and “legally mandated” oversight of the Office of the Inspector General to address a “lack of training and accountability,” and “failures of leadership” within the sheriff’s department.

(During this same Tuesday meeting, the supervisors voted 3-2 to explore ways they might be able to remove from office voter-elected LA County Sheriff Alex Villanueva, with whom they and Inspector General Max Huntsman have an ongoing feud regarding oversight and accountability, the budget, and the sheriff’s efforts to keep Caren Carl Mandoyan on staff.)

The “careless” tragedy of Twyman’s killing, Ridley-Thomas said, also “underscores the need” for the board of supervisors to do all it can to build up violence prevention efforts and other trauma-informed programs “that help families and communities heal from grief and trauma.”

Twyman was killed on June 6, 2019, when deputies fired nearly three dozen rounds at two people in a reversing vehicle.