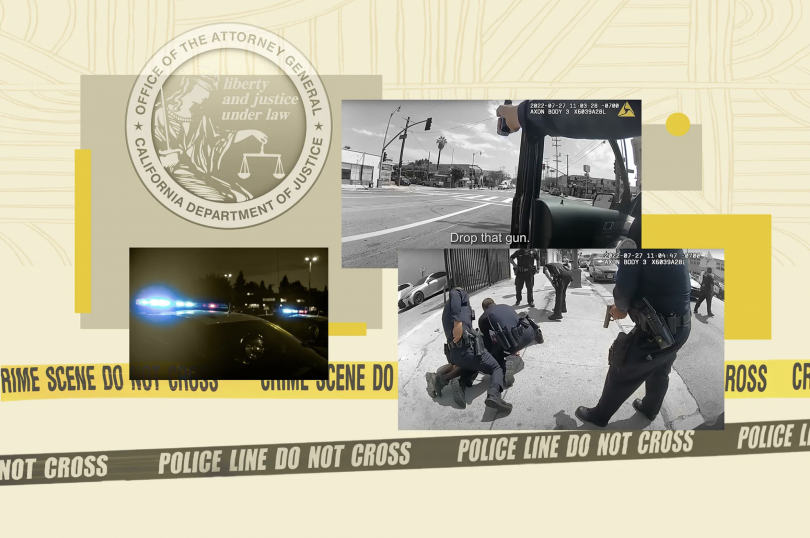 Editor’s Note: The Los Angeles Police Department has four open police shooting cases before the California Department of Justice for review under AB 1506.

The LA County Sheriff’s Department has just one — the shooting of Pedro Morales Lopez, a 67-year-old bystander shot during a standoff. (It’s not clear whether it was actually a member of the sheriff’s department who shot Morales Lopez.)

While the LASD may not have many shooting cases that qualify for DOJ investigation, on Tuesday, November 1, 2022, the LA County Board of Supervisors approved settlements totaling $47.6 million for five lawsuits accusing members of the sheriff’s department of excessive force and wrongful death, including an $8 million settlement for the family of Andrés Guardado, shot five times in the back on June 18, 2020. These settlements represent just a portion of what the county will have paid this year to resolve lawsuits against the sheriff’s department.

In the last 16 months, the California Justice Department opened 25 investigations of law enforcement officers who shot and killed an unarmed person. This scrutiny was part of a new law that took effect July 1, 2021 — one of California’s answers to the emotional and political upheaval of the 2020 police killing of George Floyd in Minneapolis. Before, investigations of fatal police shootings in California were conducted at the local level; officers were rarely charged.

As of Nov. 10, the Justice Department has resolved only one of the state’s 25 opened cases.

CalMatters found that the department has struggled to meet the goals set by the new law — including the attorney general’s own pledge to complete investigations in one year. Internal emails indicate that Justice Department employees were worried that the new workload would overwhelm them. Department officials also have complained that the Legislature slashed in half their original $26 million budget request to cover these investigations.

In the meantime, some of the officers in at least two shootings have been cleared by their local police review commissions.

The cases taken up by the Justice Department range from a man shot while fleeing a traffic stop to a teenage girl, killed in a department store dressing room when a bullet missed its target. Some were killed after they repeatedly charged officers, or menaced them with replica firearms. One man was holding a broom handle, another had his hands in his pockets. Several had nothing at all.

CalMatters is launching a review of those fatal encounters, with descriptions of the shootings and the case status. Where available, the project will post relevant records and coroner reports, follow lawsuits involving the shootings and update with the Justice Department’s decisions.

Attorney General Rob Bonta has vowed the new law will provide “impartial, fair investigations” and independent reviews of officer-involved shootings. The department will be deciding, among other elements, whether to charge the officers criminally.

On Nov. 3, the Justice Department announced the resolution of its first case. That investigation was launched on July 15, 2021, when a 48-year-old man was shot in Hollywood waving a lighter fashioned with a pistol grip. The department found it had insufficient evidence to file criminal charges against the two Los Angeles Police officers involved in the shooting. Neither officer agreed to be interviewed by the Justice Department, the state’s report showed.

“Man, why?” asked one of the officers, heard on body camera audio moments after he shot the man.

Bonta acknowledged that the investigations have taken longer than expected, and that the goal “has always been (to) get it done within a year, year or less.”

The first investigation — which lasted more than 15 months — will likely be the department’s longest, he said, and that future cases should be resolved more quickly.

Since the Legislature halved its funding request, Bonta said, the state has to wait for local agencies to report their own fatal encounters — possibly sacrificing some of the department’s perceived independence in the eyes of the public.

Bonta said the budget reduction also prevented the purchase of a mobile forensic lab; reduced the department’s statewide shooting investigation teams from three to two; and, in at least once instance, resulted in a shortage of state agents to collect evidence and canvass a busy scene on Hollywood Boulevard.

“We got the funding that we got, and we’re going to make it work,” the attorney general said. “We have no choice. We have to find a way.

“We got the funding that we got, and we’re going to make it work. We have no choice. We have to find a way.”

Democratic Assemblymember Kevin McCarty of Sacramento, who sponsored the bill that became law, has argued that the department has ample funding to get the job done.

“The idea was, they’ll get through the first year and then we’ll have a discussion this year as far as what adequate staffing looks like,” McCarty said. “It’ll certainly be a conversation in this upcoming budget year.”

The rules around a police officer’s right to use deadly force changed in 2019. Previously, an officer could be justified in shooting someone if doing so was deemed “reasonable.” The law changed that standard to say shootings are allowed “only when necessary in defense of human life.”

Since 2016, state law enforcement officers shot and killed an average of 140 people annually. Of those shootings, about 40 were not armed with guns at the time of their deaths.

Protests in the summer of 2020 focused on district attorneys in Los Angeles and Alameda counties who had never prosecuted a police officer who killed an unarmed person. That tension helped spawn the new law, which added a layer of accountability at the state level. But the attorney general’s selection of cases has not been without controversy.

As of Nov. 1, the department has had 56 cases referred by local law enforcement and conducted 40 on-scene investigations. In a Sept. 7 letter to Bonta, Sonoma County District Attorney Jill Ravitch criticized the state for turning down a potential investigation — the sheriff’s office found that a deputy had shot a man holding gardening tools.

McCarty said he wants to remove the Justice Department’s discretion by bringing new legislation in January that would compel the state to review all civilian deaths caused by police officers, not just the shooting deaths. The state’s caseload also would be expanded to include people who were armed when they were killed by police, McCarty said.

“Any death at the hands of law enforcement would have a thorough, independent, transparent investigation,” he said.

“The idea was, they’ll get through the first year and then we’ll have a discussion this year as far as what adequate staffing looks like.”

Among the 25 cases accepted for state review, similarities emerge, CalMatters found. In at least four instances, the people shot were carrying Airsoft pistols or rifles. These realistic-looking replica guns, used in a sport also called Airsoft, fire low-speed plastic projectiles and are not considered deadly weapons by the Justice Department. By contrast, BB guns and other forms of pellet guns are on the deadly weapons list.

Documents and body cam footage show that officers sometimes warned the people they were about to shoot, or offered them mental health assistance.

“Don’t do this,” one Riverside County Sheriff’s deputy repeatedly told a suspect.

“We don’t want to hurt you,” said a San Francisco Police officer to a man holding a knife under a bridge, alongside an unarmed man. Both were killed by police.

In some cases, officers fired within seconds of arriving on the scene. Sometimes, their colleagues can be heard on body camera footage telling them to slow down, hold up, wait.

Some families are not waiting for the Justice Department to issue its findings. They have filed lawsuits.

Editor’s Note: There is an interactive graphic portion of the above CalMatters story detailing the cases sent to the CA DOJ. The image below shows some of the results for Los Angeles-area cases, but do visit the original story to search through the cases. (Clicking on a card brings up more detailed information about the case.)

This article was originally published by CalMatters.

Nigel Duara joined CalMatters in 2020 as a Los Angeles-based reporter covering poverty and inequality issues for our California Divide collaboration. Previously, he served as a national and climate correspondent on the HBO show VICE News Tonight. Before that, he was the border correspondent at the Los Angeles Times based in Phoenix, deployed to stories across the country. He is a longtime contributor to Portland Monthly magazine and graduated from the University of Missouri School of Journalism.