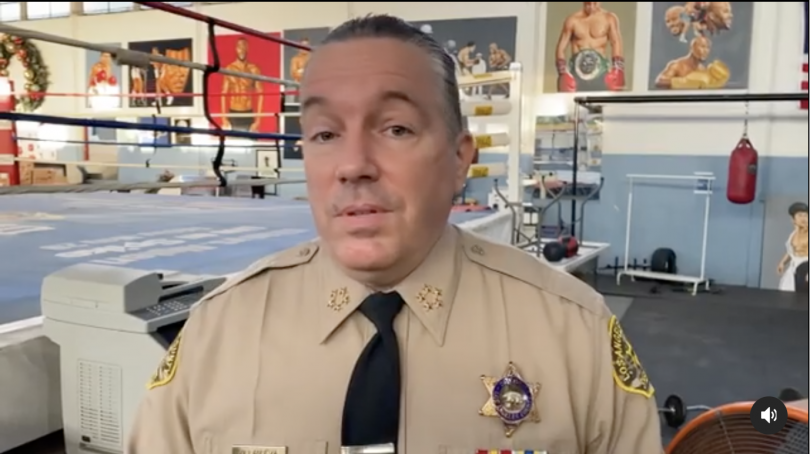 On Tuesday afternoon, November 10, the Los Angeles County Board of Supervisors passed a motion with a three/two vote, which triggers an investigation into the question of how the board could best go about removing an elected sheriff — should the board wish to take such a drastic action.

The motion, authored by Supervisors Mark Ridley-Thomas and Sheila Kuehl, asks County Counsel, Inspector General Max Huntsman, and Acting Chief Executive Officer Fesia Davenport, along with several other relevant stakeholders, to come back in 30 days with “options for removing or impeaching the Los Angeles County Sheriff.”

(Before its passage, the motion was amended to have the report back delivered in January, rather than December, which means that new Supervisor-elect Holly Mitchell will have taken her place on the soon-to-be five-woman elected body.)

The requested report, according to the motion, should include “any necessary changes to the county charter or county code” to make such a removal possible.

“The Sheriff’s recent actions have made it clear that reform efforts undertaken to restore public trust and confidence in the Los Angeles County Sheriff’s Department will continue to be undermined despite current public scrutiny demanding that the Sheriff do otherwise,” reads the motion’s text.

The motion — the genesis of which WitnessLA wrote about at length late last month —  also asks for a report back on what it would take to amend the California Constitution along with the LA County Charter in order to make the head law enforcement officer of LA County an appointed position, such as a police chief, rather than an elected one.

Supervisor Janice Hahn who, along with Supervisor Kathryn Barger, voted against the motion, nevertheless did not hold back her criticism of Sheriff Alex Villanueva, when she explained her stance before the vote was taken.

“This sheriff feels accountable to no one,” Hahn said. Nevertheless, she wasn’t sure if the board needed to be the ones to remove a problem sheriff, she said, since the voters already have the power to remove an elected official, if they believe it necessary. (Think former Governor Gray Davis.)

Voter recall or board action

Yet, while Hahn did not think it was the board’s job to “remove an elected official.” she reiterated that LA County voters can remove a sheriff through the recall process, adding that that the people who spoke passionately in favor of the motion during the public comment period, “would have a very strong case” if they chose to “bring a recall to the voters.”

Hahn sounded as if she was making a suggestion.

Supervisor Hilda Solis, who voted for the motion, was unequivocal in her view that the board needed to explore the matter themselves.

“Despite two oversight bodies, the sheriff continues to thwart any attempt at oversight,” Solis said.  “So what we’re dealing with is a sheriff with a tremendous amount of power and no accountability.”

Solis has been repeatedly critical of Villanueva’s handling of the issue of deputy gangs,  among other issues, in part because her East Los Angeles constituents have reportedly continued to complain in detail to her office about the behavior of certain deputies at the East LA sheriff’s station, home of the Banditos.

Solis was also among the supervisors against whom Villanueva has delivered personal attacks, as he did in July of this year.

“Are you trying to earn the title of a La Malinche?” he said of Solis on a live broadcast.  “Is that what it is?”

(La Malinche refers to a controversial figure in Mexican history who became the slave, interpreter, and possible concubine of Hernán Cortés. In short, Villanueva’s use of the term was not at all friendly.)

After the meeting, Co-author Kuehl, like Solis, pointed in a written statement to Villanueva’s now notorious refusal to cooperate at all with the Civilian Oversight Commission and Inspector General Max Huntsman, defying both polite requests for information and subpoenas.

“He has incurred tens of millions of dollars in settlement costs in excessive force litigation, re-employed deputies who were lawfully terminated, and aggressively resisted the county’s attempt to balance the department’s budget which is running unprecedented deficits.”

True community safety, she said, “means having a sheriff’s department that operates within the law, within budget, and works collaboratively with local officials and the public to build and maintain community trust.”

When Ridley-Thomas spoke about the motion during the meeting, he noted that close to 600 people had sent in comments supporting the motion.

After the meeting, he again explained why he felt Tuesday’s motion was critical, citing recent scandals over fatal deputy shootings, secret societies, the rehiring of previously fired deputies, and a department budget in turmoil.

“Under the current sheriff, hard-fought law enforcement reforms are being undone, eroding public trust,” he said. “It is painfully obvious that we need mechanisms to hold the sheriff accountable and we are willing to consider executive, legislative, and judicial authority to restore order.”

Justice reform activist Mark-Anthony Clayton-Johnson, Founder of Frontline Wellness Network, who was among those who spoke during the public comment section, also put out a post meeting statement.

“The community shouldn’t have to wait four years to get rid of a sheriff who has actively undermined reforms that Black and Brown communities have won,” Clayton-Johnson said.  “We should explore every means of holding the sheriff accountable, including rethinking whether the sheriff should be appointed.”

Sheriff Villanueva himself spoke briefly on the motion during the board meeting, where he was notably less confrontational than he has been in the recent past.

Then, at the end of the day, Villanueva put out a second statement via Instagram, in which he said he has “extended an olive branch” to the board, with whom he wanted to cooperate in dealing with the county’s many pressing problems.

“As President-elect Joe Biden said the other day,” Villanueva concluded “Let’s stop demonizing each other and work to find common ground.”