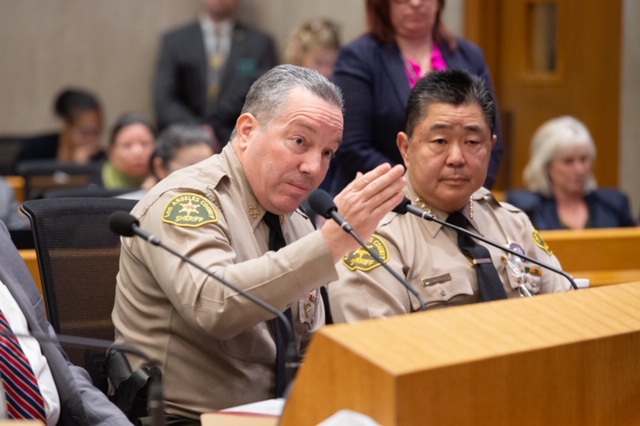 More than a decade ago, during the corruption-riddled past of the Los Angeles County Sheriff’s Department,  WitnessLA wrote a great deal about how the LASD’s notorious former undersheriff, Paul Tanaka had a pay-to-play promotional system.

Those who were unquestionably loyal to those at the top of the department—which mostly meant Mr. Tanaka, who was known at the time as the shadow sheriff, and sometimes then-sheriff Lee Baca—moved up through the ranks faster, statistically speaking, than non-loyalists.

In other words, climbing the promotional ladder inside the nation’s largest sheriff’s department was, in too many cases, driven by favoritism rather than merit.

Yet, to make this unscrupulous system work, Tanaka needed others to participate with the various promotional schemes.  In some cases, this reportedly meant allowing a list of answers to the questions on the tests one had to take to move up the ladder to the position of sergeant or lieutenant, to be passed out to a chosen few, who then engaged in private study sessions..

And in other cases, those in a position to do so, were asked to change the scores a candidate for sergeant or lieutenant received when interviewed for the promotion.

Yet, if the commanding officer in a position to facilitate unearned promotions declined to play ball with the cheating construct, as was true in one well known case, retaliation ensured, including against a family member who also worked in the department.

Yet, that was, of course, years ago.  Since then, Paul Tanaka and some of his hench persons were federally indicted and went to prison.

Furthermore, the present head of the department, Sheriff Alex Villanueva, ran on the promise to root out “cronyism and corruption,” and to move people up to leadership who were “dedicated, educated, extremely bright, and experienced,” rather than using favoritism as the main metric.

Yet, according to a new civil rights lawsuit filed on Wednesday, January 25, by civil rights attorney Vincent Miller in behalf of an LA County Sheriff’s deputy named Rosa Gonzalez, favoritism and rigged promotions appear to be back in operation in the department, and those who fail to cooperate again face vicious retaliation.

In the summer of 2021, Sergeant Rosa Gonzalez, a department veteran, was assigned as Operations Sergeant at the LASD’s Personnel Administration Bureau—or PAB).

The PAB is responsible for all hiring, promotions, and personnel movement at the LASD. So, it is understandably considered important that those within the PAB be capable and scrupulously honest, although in the LASD’s bad old days, that had demonstrably not been the case.

Fast forward to late July, early August, 2021, when another sergeant working at the PAB, allegedly confided in Gonzalez that, with the assistance of the division’s acting head, Acting Captain Yvonne O’Brien, the sergeant, was committing fraud by getting paid for working in the bureau, while in fact this sergeant, whose name was Arballo, had been falsifying her timecard. Specifically, she stated that she was at work on multiple days, while in truth it appears she was in Arizona, preparing for the lieutenant’s exam—and reportedly was doing so with a bunch of outside help.

Arballo, who reportedly seemed to need someone in whom to confide about her actions,  and so admitted to Gonzalez that she cheated on the exam using test questions and answers that Captain O’Brien had slipped to her, and reportedly also to around 20 others, ahead of the test.

According to Gonzalez, Arballo’s timecard indeed showed that she worked on July 26, July 27, August 2, and August 3, 2021, although she was not actually at work at all.

Furthermore, according to the civil right complaint filed Wednesday,  O’Brien and Sheriff Villanueva approved of the timecard fraud and cheating on the Lieutenant’s exam.

And just so we’re clear, such cheating is not just a violation of LASD policies, said Attorney Vincent Miller, it is also a criminal act of fraud.

Yet, cheating on the test was not the only unethical and illegal activity allegedly going in in the LASD PAB during the summer of 2021, activities that Gonzales was implicitly and, eventually, explicitly, asked to go along with according to the complaint.

Finally, in October 2021, Rosa Gonzalez became a department whistleblower by filing a grievance detailing the string of illegal actions she reportedly witnessed or of which she had knowledge.

According to the new lawsuit, retaliation against Rosa Gonzalez swiftly followed.

There is, however, much more to this tale of whistleblowing and vengeance in the Los Angeles County Sheriff’s Department.

We’ll be back with additional details.