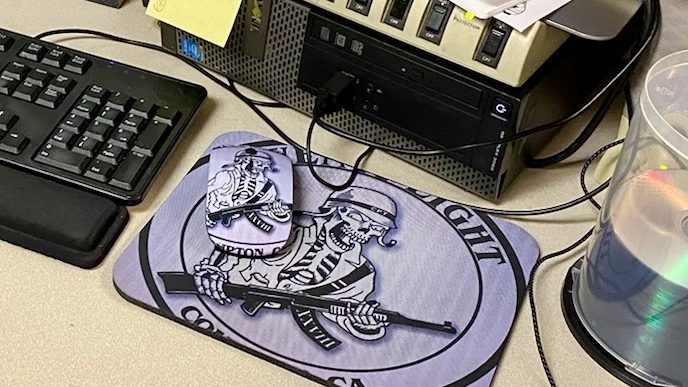 In a new legal claim, a Los Angeles County Sheriff’s deputy describes how the Compton Sheriff’s Station has, in the last few years, been permeated by “a violent deputy gang” called the Executioners.

The gang is reported to be an evolution of the 3000 Boys, one of the deputy cliques that was active more than a decade ago in LA’s decrepit and dungeon-like Men’s Central Jail. Members of the 3000 Boys were involved in, among other things, the now infamous December 9, 2010 deputy brawl at the Quiet Cannon restaurant.

Shortly after the Quiet Cannon,  several 3000 Boys who had finished with their required time working in the department’s custody division, reportedly packed up the bad ass ethic they had created — with the support of former LASD undersheriff Paul Tanka, before he was convicted of a couple of federal crimes — and imported it to Compton.

A group of 3000 Boys, the deputy clique that has evolved into the Executioners/WLA

According to the claim, the Executioners operate at the Compton station –CPT, for short — “with impunity,” its members using violence, threats, and retaliation against other deputies, supervisors, and “members of the public” in order to strengthen the profile of the organization, and its influence at the station

(Note: The historic but problem-plagued Compton Police Department was disbanded in Sept. 2000.  Then, the day after the shutdown, the Compton City Council  contracted with the LA County Sheriffs Department to provide law enforcement for the city, which it has done ever since.)

The recent ten-page Claim for Damages, which you can read in its entirety here , was  filed in behalf of LA County Sheriff’s deputy Austreberto “Art” Gonzalez, who was reportedly retaliated against when he became a whistleblower in early February 2020, after a well-known Executioner named Eugene Contraras threatened, then allegedly assaulted another non-Executioner deputy when they were both on duty.

The assaulted deputy, Thomas Banuelos, texted Art Gonzalez on February 8, telling him of the alleged attack by Contraras.

In the legal filing, Gonzalez states he knew Contraras to be an inked member of the Executioners, and had   recently witnessed his “extremely aggressive,  bullying behavior,” with others.  So when Banuelos, who like Gonzalez (and Contraras), was a training officer at the Compton station, told him of the violent incident, he took his colleague’s account very seriously.

As has been much discussed in Los Angeles and elsewhere in the days since the death of George Floyd,  in law enforcement organizations, a deputy or a police officer is required to report wrongdoing on the part of another deputy or officer.  So, with this principle in mind, Gonzalez made an anonymous call to the LASD’s Internal Affairs Bureau, and reported the assault on Banuelos. 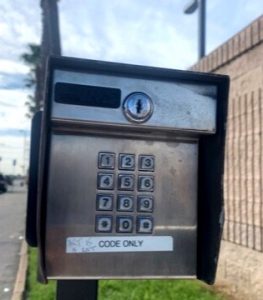 “ART IS A RAT” graffiti

However, according to the legal filing within two days of his call, Gonzalez learned that “inked members of the Executioners” already knew of the call, and knew that Gonzalez was the person who made it.

Soon graffiti began showing up around the station in areas where no one could fail to see it.  The graffiti read:  ART IS A RAT.

Once it was clear that IAB had not kept the call confidential and, what is more, his voice had been identified, Gonzalez began to fear retaliation would now be directed at him, and took a week off, hoping things would settle down.

Things did not settle down.

“I think the scariest thing,” said Gonzalez’ lawyer, Alan Romero,  “is that he did what he was supposed to do.  He called the authorities, and they betrayed him. They turned him right over to the gang.  It’s a whistleblower’s worst nightmare.”

“And,” Romero continued, now he has a very real apprehension of violence, because the other deputy got beat up.”

According to Vincent Miller, the attorney on the Banditos brawl lawsuit, Gonzalez’ fears are likely not helped by the fact that he is close to someone at the East LA station who has reportedly been assaulted twice by members of that deputy clique,

Furthermore, as the new legal filing points out, Gonzalez’ situation also cannot help but call “the integrity of the IAB’s entire anonymous reporting program into question.”

Outside the station, nearly all the CPT deputies who have been in involved in high profile shootings and out of policy beatings in recent years have, been “inked” members of the Executioners,” according to Gonzalez’ claim. 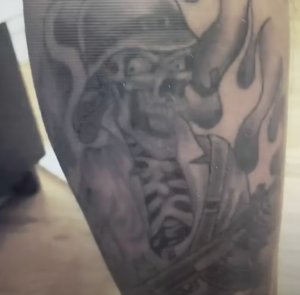 “Inking,” of course, refers to the matching tattoo that indicates membership in the organization.”

The Executioners’ tattoo consists of a skull in a helmet holding a flaming AK-47.

Deputies involved in fatal shootings outside CPT, are likely to be inked, according to the Gonzalez filing. And sometimes, when a shooting occurs,  the Executioners having “inking parties, to commemorate the shooting and the induction of the new member or members, according to the claim.

Other  sources, both in an out of the department, have confirmed to WLA the existence of such celebratory parties, which are reportedly generally not disclosed to others outside the Executioners’ trusted circle.

For example, there was reportedly a party celebrating after Executioner members and supporters were part of a lengthy and messy vehicle chase and shootout on July 3, 2019, with the occupants of an SUV owned by the rapper YG, which resulted in the shooting of an innocent bystander, 65-year-old Ricky Starks.

Of the approximately 100 patrol deputies at CPT, the claim estimates that 20 are inked members, with another 20 or so, considered “prospects” or close associates of the deputy clique

Whether or not all deputies involved in fatal shootings in Compton in the last few years, are Executioners, a number of those involved in high profile fatal shootings, and other violent incidents, appear to be connected to the deputy gang.

In June, when TMZ obtained a video showing three Compton deputies beating and kneeing handcuffed, one of our sources was able to identify all three by name as Executioners.

Then there is the case of the death of Andrés Guardado, the 18-year-old young man who was shot five times in the back by Compton Deputy Miguel Vega, at 6 p.m. June 18, near the 400 block of West Redondo Beach Boulevard.

According to WLA’s sources, Deputy Vega’s training officer was the above mentioned Executioner Eugene Contraras, whose alleged assault against another deputy turned Art Gonzalez into a whistleblower.

Vega’s partner, Compton Deputy Chris Hernandez, was also at the scene of the shooting of Andrés Guardado but did not open fire.  And, thus far, there is no mention of Hernandez being associated with the Executioners.

Another high profile Executioner-involved case was the 2016 shooting of Donta Taylor, which resulted in a $7 million payout over a wrongful death lawsuit, after two Compton sheriff’s deputies killed Taylor in 2016, claiming he pointed a gun at one of them. No gun was ever found.

During a deposition taken in the course of the lawsuit, Deputy Samuel Aldama, one of the two deputies involved, described the tattoo on his calf, which featured a skull in a helmet bearing the letters “CPT” for Compton, along with a rifle, encircled by flames.

The Los Angeles Times’ Maya Lau reported that Aldama said he got the tattoo in June 2016, about two months before he was involved in the fatal shooting of Taylor.

Yet, although, the Times reported that Aldama said he was one of group of 20 deputies who got to have the tattoo for “’working hard’ by making arrests and answering calls,” he reportedly denied being part of any kind of club.

There was no mention of the tattoo being the insignia of a gang called the Executioners, or that the group was the unseen power controlling significant parts of the Compton station’s day to day life.  Or that they reportedly decline to take members who are Black men.

Work slowdowns and other threats and favors

The Executioners were founded by a former 2000 Boy named Andy Toone, who has since moved on elsewhere in the department.

After Toone, the inked Executioner named Jaime Juarez reportedly rose to become the group’s shot caller.  Juarez was helped to some degree in his rise by the fact that he was the scheduling deputy, which meant he controlled the scheduling for most of the station’s sworn personnel.

This reportedly allowed him to pair deputies newly assigned to Compton with inked gang members, if the new deputy showed promise as a future Executioner.

Interestingly, Juarez was part of a reform effort by former Sheriff Jim McDonnell who reassigned a list of deputies who had each been involved in multiple on-duty shootings, to new assignments behind a desk.  Juarez was one of those on the reassignment list.  But he reportedly made the best of being desk bound, by converting his scheduling position into one of the most powerful jobs in the station.

Deputy Gonzalez, whose practice it was to mostly try to ignore the Executioners, as he was not interested in becoming one of them, first ran afoul of the deputy clique in 2016 when he approached Juarez to find a way to get his schedule changed  in such a way that he could temporaily provide medical care for his severely diabetic daughter, on the dates previously ordered by the court, during his divorce.

Instead, according to the claim, Juarez  put Gonzalez on the early morning shift, in order to accommodate an Executioner, in what was reportedly part of an ongoing pattern of allowing those in or sympathetic to the gang receive preferential scheduling over everyone else.

When Gonzalez tried to work out some other reasonable accommodation, Juarez reportedly refuse to help, and told him to use use his PTO — personal time off — which meant taking 6-8 weeks completely off work, in order to satisfy the court order.

While that scheduling problem was a temporary personal issue, in his filing, Deputy Gonzales describes a sheriff’s station that is often paralyzed by threats of retaliation by Executioners members and “associates,” whenever the the gang’s dictates are not followed.

The Executioners, for example, were able to threaten and carry out “work slowdowns” in which gang members and those who wished to gain or keep favor with the gang, would “cease some or all of their law enforcement duties,” in order to retaliate toward higher-ups who failed to do what they wanted.

They reportedly did exactly that in 2019, when interim station captain, Lt. Larry Waldie,  declined to let Juarez dictate who Waldie could appoint to a particular position in the station, which the gang wanted to fill with one of its own.

The resulting work slowdown, called by Juarez in demonstration of his power, was dramatic and reportedly drove up crime in the community, and caused those farther up the departmental food chain wonder what the acting captain was doing wrong.

(Lt. Waldie, who is the son of Larry Waldie Sr, a former undersheriff of the department, prior to Paul Tanaka, has subsequently filed his own lawsuit. But that’s another story.)

In this same way, the Executioners, led by Juarez, were also capable of shoving the arrest statistics the other way, as they reportedly did in the late summer and early fall of 2017,  pushing arrest stats up 300 percent in a month, and then several weeks later,  pushing the numbers still farther, by reportedly setting quotas for deputy, which resulted in arresting people for misdemeanors so trivial that, according to the filing, and our other sources, “would previously not have resulted in an arrest” or, in other cases, in a citation at all.  These juked-up arrest stats reportedly gained the gratitude of certain higher-ups, who later might be called on to return the favor.

And, while Juarez was theoretically disciplined for the work slowdown, he is presently at Compton station and appears to be as powerful as ever.

“One of the most important things this makes clear,” said attorney Vincent Miller, referring to the Executioners, “is that the Banditos are not an outlier in the department.”

ABC 7’s Lisa Bartley and Miriam Hernandez have done an interesting follow-up story on the Executioners.  So tune in.