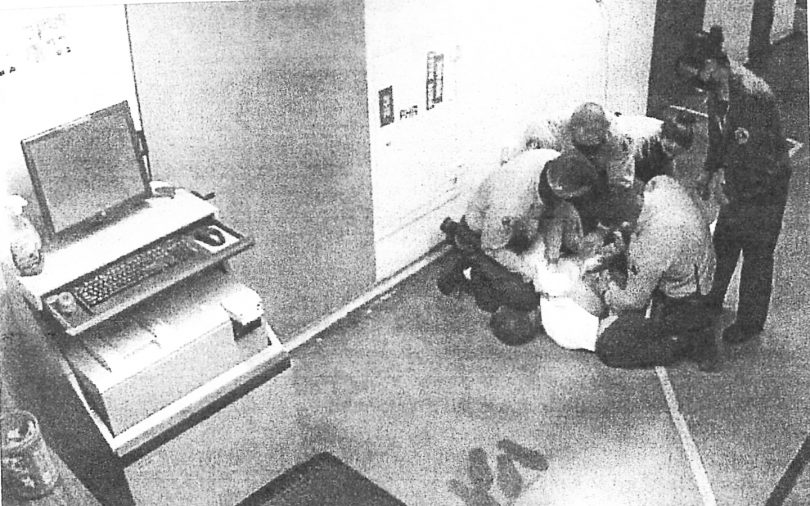 We’ll have more news later in the week, but for now, here are some quickie updates on the actions of LA’s sheriff, plus some additional information on the cost of Villanueva’s alleged attempt to hide the case of the head-kneeling deputy

When Villanueva ran for sheriff against then sitting sheriff Jim McDonnell in 2018, he engaged in a smart strategy, which was to seek—and in most cases get—the endorsement of every Democratic voting club in LA County, that would let him though the door.

Many of this year’s candidates who hope to unseat the present sheriff are trying to follow his lead on that game plan.

With this in mind, several of those candidates spoke to the Burbank Democratic Club on Thursday of last week.

According to the @Burbank Dem’s tweet on Sunday, which you can see below, things did not unfold in a felicitous manner.

Sheriff Villanueva, who was also scheduled to speak, evidently changed his mind about the need to show up. The sheriff instead sent his his campaign manager, Javier Gonzales, who, according to the @BurbankDems, “read a statement and then spewed profanities thinking he was off-camera.”

Still later that day, Gonzales and the sheriff reportedly followed-up with an additional communication to the @BurbankDems, wishing them good luck with “all the murders you support instead of the man who is cleaning up LA County….”

Fast forward to Sunday night, when our sheriff was featured by John Oliver on his show “Last Week Tonight.”

“It is a damning story about abuse of power,” Oliver said of his report on Villanueva, then pointed to the recent behavior that has caused LA County’s Sheriff to appear in the national news, namely threatening journalists, and engaging in a criminal investigation to find out who leaked the video that showed a dangerous instance of deputy wrongdoing that the sheriff tried energetically to keep under wraps.

In the video, we see happy LA residents frolicking in slo-mo through their days to the music of Shubert’s Ave Maria, evidently unaware that respective California dreams are being wrecked. Then to further make the point, in another scene, a popcorn tossing couple are being robbed by an unusually clumsy pair of cat burglars.

In the final scene we view the sheriff, not in uniform, but wearing a dark green sweatshirt, perhaps in the hope of imitating the army green t-shirts and army green sweatshirts famously worn by Ukrainian President Volodymyr Zelensky.

Finally on Monday, May 2, we learned from Kate Cagel of Spectrum that, according to the head of the nation’s largest sheriff’s department, the decision by some whistleblower or other to leak the video of Deputy Douglass Johnson having his knee on the neck and head of Enzo Escalante for more than three minutes, was far worse than the decision by Deputy Johnson to potentially cut off Escalante’s breathing, or cause him serious injury to his neck and or back, after the man had completely complied.

This brings us back to the 27-page civil rights complaint filed by former LA County assistant sheriff Robin Limon late last week, in which Limon explores how, in the fall of 2021 she became increasingly concerned about the sheriff’s actions around the March 2021, head kneeling case, about which Villanueva spoke so dismissively to Spectrum’s Cagel.

According to Limon, by delaying or altogether blocking, the criminal investigation into the actions of Deputy Johnson, he was putting other jail residents and community members at frisk.

Specifically, Limon wrote, she believed that to fail to hold Deputy Johnson accountable for his actions, sent a message to other deputies that Johnson’s particularly risky form of use of force was perfectly acceptable, especially against someone who had assaulted the deputy.

Furthermore, if other deputies were using use-of-force actions that were anything at all like Johnson’s, the sheriff needed to institute training that insured that the practice would be stopped.

Otherwise someone was going to get hurt, or worse, according to Limon.

Instead, she said in the complaint, the sheriff made light of the incident, much as he did with Cagel minimizing its effect “since the inmate did not die.”

Meanwhile, Limon noted, law enforcement agencies around the nation were changing force policies now that they “recognized that this tactic could prove to be lethal.”

All this meant that Villanueva should have acted on this excessive use of force “immediately and protected” the county’s “residents.”

Ideally, Limon believed, the sheriff should have issued and “a warning and a reminder to deputies” on patrol as well as the jails. He did none of this.

So it was that, in April 2021, “another troubling use of force occurred against a disabled resident,” according to Limon

The former Assistant Sheriff was not the only department member having these concerns about the case being kept away from any kind of criminal investigation.

“The problem that everybody had initially with the use of force incident by Deputy Johnson,” one department source told WLA, “was that the force was good. The inmate assaulted Johnson,” so he was restrained and handcuffed.
“But once you handcuff him, and he’s no longer resisting, but you still have your knee on his neck it’s a different thing,” said A source familiar with the details of the case. “Then the communication is, ‘You f-ing f-ed with me. I’m going to f-ing put my knee on your neck. You don’t matter.”

And two supervisors, “who should have known better,” did nothing to intervene, the source added.

We also learned that the part of the video that most of us saw, shows Deputy Johnson kneeling on Enzo Escalante’s head, not his neck. But reportedly much of the time, said our sources, Johnson was kneeling hard on Escalante’s neck..

“And when [Johnson] was tapped out,’ said one source, “the inmate had big red marks on marks on his neck. In the photos of him you can see a big red contusion on his neck the size of an apple.”

The source agreed with Limon that the situation was indisputably dangerous.

“When you put pressure on someone’s neck for that length of time, you could cut off their breathing, or break their neck. Then they’re dead.”

On, April 19, Escalante, the man on whose neck and head LA County Sheriff’s Deputy Douglass Johnson knelt, filed his own federal civil rights lawsuit against Sheriff Alex Villanueva and others.

Escalante is being represented by federal civil rights attorney Stephen Yagman, who was disbarred more than a decade ago for 2007 tax fraud and related charges, but who reclaimed his law license, re-passed the California Bar, and in the last year plus has taken on a string of cases he believes are important.

One of those cases, Yagman told WitnessLA, is that of Enzo Escalante, whom Yagman says was left with “abrasions and contusions,” to his ears and his neck, and is still suffering from “severe neck pain” and “unbearable back pain.”

According to Yagman, during some part of the neck kneeling, Escalante told Johnson he couldn’t breathe, but Johnson told him to “shut up.”

The sheriff’s actions then and now have effectively communicated a similar message to those who saw the head and neck-kneeling incident as important.

More soon on the issues of rigged promotions, favoritism, and ongoing corruption, especially in the realm of Sheriff Villanueva’s reelection campaign. .