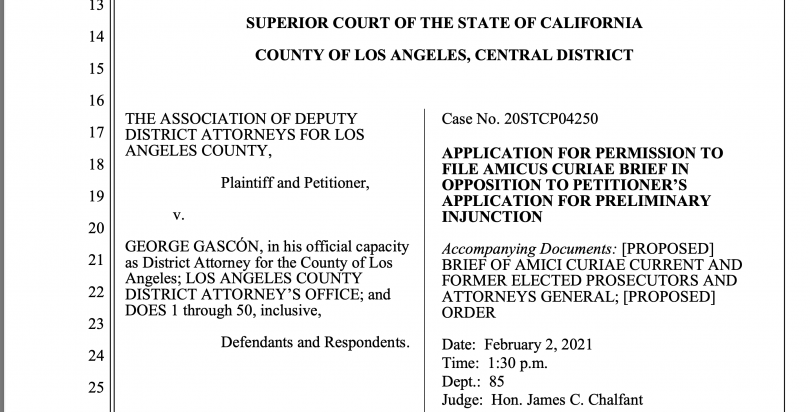 During the race, Gascón positioned himself clearly as a strong reformer, and made a string of campaign promises outlining what reforms he would make first if he won.

It was a hard fought battle, with most of law enforcement groups backing Lacey, and justice reform groups lining up behind Gascón.

Inside the DA’s office itself, WitnessLA’s sources described one camp wanting to see Lacey get a third term. While others were desperate for someone new.  The latter described a toxic culture of retaliation inside Lacey’s office for anyone who rocked the boat, or worse, tried to report wrongdoing.

George Gascón was sworn in — virtually — on December 7, and right away he announced a list of reforms in keeping with his campaign promises.  The changes were labeled Special Directives, and were posted on the DA’s website.

Among the new special directives were announcements that the DA’s office would no longer charge juveniles as adults, nor would it seek the death penalty. The Gascón-led office would not charge many low-level first time offenders. DA Gascón would eliminate cash bail. (In the case of those accused of murder and other violent felonies, prosecutors would seek detainment, not bail.)

The new DA launched a victim services group, and a supercharged sentencing integrity unit that would, “in good-faith” perform case reviews,” and when necessary “remedy wrongful convictions, and take any remedial measures necessary to correct injustices uncovered, within the bounds of the law.”

And, Gascón would, he announced, for the most part get rid of nearly all sentencing enhancements, including certain parts of California’s three strikes law, the California STEP Act (which lengthens a sentence if the defendant is believed to part of a street gang), 10-20-life,  which drastically lengthens sentences if a gun is involved, even if the defendant never held or fired the gun, plus other sentencing strategies that can add years or decades to someone’s prison term, far in excess of what the range of sentences that the commission of certain crimes already requires.

The matter of sentencing enhancements in particular, caused energetic pushback among certain prosecutors, and victims rights organizations, which caused Gascón to modify his directive on sentencing enhancements for hate crimes, certain financial crimes, elder and child abuse, and sex trafficking, after meeting with the various groups.

The pushback, however,  ramped up quite a few notches on Wednesday, December 30, 2020, when the Los Angeles Association of Deputy District Attorneys filed a lawsuit with the intention of preventing Gascón from following through with his sentencing enhancements directive, which the LA ADDA characterized as radical and plainly unlawful.

“While an elected District Attorney has wide discretion in determining what charges to pursue in an individual case, that discretion does not authorize him or her to violate the law or to direct attorneys representing the district attorney’s office to violate the law,” said Michele Hanisee, President of the ADDA, in a statement issued the day the lawsuit was filed.

But are George Gascón’s reforms really unlawful and a threat to public safety?

A group of 65 prosecutors — working and retired — from all over the U.S. have said no and no.

This broad group of prosecutors expressed their views in the form of an Amicus Brief in support of Gascón and his team in the legal conflict, which is to be heard on February 2, 2021 in the court of Judge James C. Chalfant.

(You can read the brief for yourself here: Gascon Amicus Brief.)

“Historically, prosecutorial discretion has too often been used to impose harsher penalties that have particularly impacted people of color and harmed communities, not made them safer….” wrote former Los Angeles County District Attorney Gil Garcetti on the topic in separate a statement.  “While some are having difficulty accepting [DA Gascon’s] changes, there is only one elected official in the DA’s office.”

The new brief dives much further into the issue.

The “Amici have a deep understanding of the important role that prosecutorial discretion plays in the criminal justice system,” the brief states in its opening, and they are “extremely concerned that the injunction sought by Petitioner would undermine, in unprecedented fashion, the longstanding discretion, constitutional authority and responsibility of elected prosecutors.”

So, what does an elected prosecutor get to decide?

According to the new brief and its 65 signatories, the nation’s elected prosecutors — for better and sometimes for worse — have “broad discretion over whom to prosecute and what offenses to charge,” which also includes “the ability to determine what penalties and sentence to seek.”   That means they can choose whether to pursue available sentencing enhancements, in order to best protect community safety and advance justice, according to the nationwide group of prosecutors.

“This authority,” states the brief,  “is enshrined in separation of powers principles included in most state constitutions, including California’s, and their federal counterpart.”

Furthermore, according to the brief,  an elected district attorney “must be able to guide the exercise of discretion by his deputies and the use of inherently limited criminal justice resources through transparent and straightforward policies.” Indeed, write the national group of prosecutors,  the district attorney is elected by the community to do exactly that – “and is accountable to the voters for those decisions.”

Although the case, on the surface of it, just pertains to Los Angeles County, the issues it raises, have national significance, hence the sign on of the 65 other prosecutors—present and past.  The brief, also points to the fact that, a decision on this lawsuit, has national consequences.

“We are deeply troubled by the attempt by the Association of Deputy District Attorneys for Los Angeles County to usurp the power of the elected district attorney and use the courts to override the lawful, discretionary policy decisions of an official, chosen by the voters of Los Angeles, to transform the criminal justice system in that community,” states the Amicus Brief.

These reforms,  “include ending death penalty prosecutions, the use of money bail, and the criminalization of mental illness and homelessness, as well as curtailing lengthy prison sentences and the use of sentencing enhancements,” write the authors of the brief, Michael Romano, director of the Three Strikes Project of Stanford University Law School, and Erwin Chemerinsky, Dean of U.C. Berkeley School of Law.  These are all “objectives consistent with the boundaries of the legal system and the sound exercise of prosecutorial discretion.”

The Los Angeles community elected him, they write, “over opposition by the ADDA, to carry out these promises and bring a new vision to the Los Angeles criminal legal system.”

“Thousands marched in the streets of Los Angeles over the past few months demanding a transformation of LA’s criminal legal system, and millions of voters elected DA ​Gascón with a mandate of reform​,” said ​Krinsky.

“Efforts to prevent the duly elected District Attorney from implementing the exact vision and approach to criminal justice overwhelmingly supported by LA County voters – and increasingly embraced by communities around the nation – aren’t just an attack on prosecutorial discretion, they’re an attack on our community and our democratic process.”

(This month that seems to be a trend.)

And in case Judges Chalfant, who will be hearing the issue on Feb. 2, might miss the point, the brief restates the overriding issue with emphasis.

It should not escape the court’s attention, wrote the brief’s authors, Chemerinsky and Romano, that although the matter is presented “as a purported issue of legality and prosecutorial ethics, the instant action is, at bottom, an attempt by the Association of Deputy District Attorneys to harness the authority of the court to prevent District Attorney Gascón from making policy decisions that the deputies do not agree with.”

Court intervention here would set “a dangerous precedent,” the authors write thus “allowing Petitioner (who opposed Gascon’s election) and unelected line prosecutors, to strip the elected District Attorney of the autonomy to make decisions around the safety and well-being of the community. And any such decision would also necessarily erode the rights of local voters to have a say in that vision.”

We look forward to finding out how  Judge Chalfant views the matter on February 2.    So….stay tuned