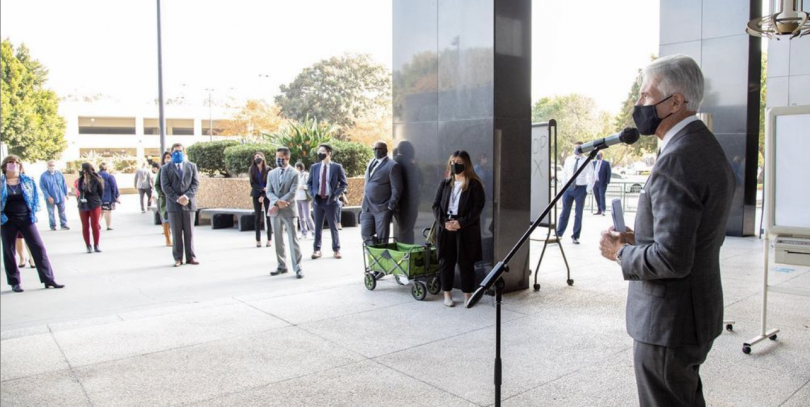 On Monday morning, February 8,  Superior Court Judge James C. Chalfant issued his ruling on the legal filing by the LA Association of Deputy District Attorneys in which the local DA’s union asked Judge Chalfant to slap down Los Angeles District Attorney George Gascón’s reform-minded “directives,” most particularly the DA’s directive that instructs all the prosecutors who now work for him to stop using “sentencing enhancements,” with a very few exceptions.

Sentencing enhancements, as readers may remember, are sentencing add-ons like the California STEP Act (which can lengthen a sentence if the defendant is believed to part of a street gang), 10-20-life (which drastically lengthens sentences if a gun is involved, even if the defendant never held or fired the gun and didn’t commit the underlying crime, but was present),  plus other sentencing strategies that can pile on years or decades, to someone’s prison term, in excess of what the range of sentences that the commission of certain crimes, particularly serious crimes, already requires.

The hearing on the matter took place last Tuesday, Feb. 2, and Judge Chalfant’s ruling finally appeared at around 10 a.m. Monday morning of this week.

After the ruling was released, the prosecutors’ union almost immediately declared victory via Twitter.

“The judge presiding in the case between the Association of Deputy District Attorneys and the Los Angeles County District Attorney has ruled in the ADDA’s favor,” the union tweeted a little under an hour after the ruling surfaced.

Counter to what the ADDA’s announcement declared, in his 46-page ruling,  Judge Chalfant did not award victory to one side or the other, but instead seemed to attempt to split the baby, so to speak.

(You can read the ruling yourself right here: 20STCP04250 Gascon prelim inj)

Chalfant gave the union a partial victory by issuing the requested preliminary injunction to prevent the new LA District Attorney from ordering his prosecutors “not to plead and prove strike priors under the Three Strikes law.”

(California’s controversial three-strikes law was one of those sentencing enhancements most criticized in the union’s legal filing.)

In other words, the preliminary injunction does say that when it comes to existing three strikes cases, where the prior strikes have already been “proved,” Gascón can’t tell his prosecutors to eliminate those strikes and the lengthier sentences they carry with them, from a case that is already in process.

There is a similar prohibition on existing cases involving “special circumstances” allegations, which can carry with them a death sentence or life without parole.

The exception to the terms of the injunction, the judge also seemed to suggest (although his writing on the matter was slightly tangled), may or may not be found in CA penal code section 1385, which allows a a judge to dismiss a case, or get rid of previous strikes, or dump special circumstances, et al, “in furtherance of justice.”

But — and now here’s where the splitting of the baby comes in — Judge Chalfant wrote at the conclusion of his ruling that his temporary injunction did not prevent DA Gascón from “keeping deputy district attorneys from charging sentencing enhancements in new cases where not required by the Three Strikes law.”  (Italics ours.)

That is, unless the cases involve three strikes, where it appears more complicated in terms of Judge Chalfant’s reading of caselaw.

And, furthermore, since this is a preliminary injunction, that means that it has only temporary application.  Its purpose, as the judge wrote,  is to “preserve the status quo pending final resolution upon a trial.”

The DA’s office reportedly will appeal the ruling.

So what else should we take away from Monday’s ruling?

Well, since Judge Chalfant’s actual conclusion only takes up a short paragraph on the ruling’s last page, the rest of the 46 pages arguably provides some windows into the judge’s thinking in arriving at his decision.

Furthermore, many of those windows suggest that the judge may have been, at least in part, viewing caselaw through a tough-on-crime perspective of 20 or 30 years ago, judging by some of the things he cites. (For examples, see pp 21-23 in his ruling.)

It is a perspective that purported to protect victims of crime and support public safety, although research has long ago demonstrated that, by and large, it did nothing of the kind.  Instead it produced collateral damage to many of our most vulnerable communities, and filled up our prisons.

(LA Times editorial board member, Robert Greene, has a terrific essay that relates to this perspective of the judge’s ruling.)

As inpatient psychiatrist Christine Montross, MD, puts it in her remarkable book, Waiting for an Echo: the Madness of American Incarceration, “As a society we don’t see through the political rhetoric to acknowledge that tough on crime policies have not augmented safety.”

We say we want “safety, justice, accountability,” she writes, “but our practices reveal that we actually want revenge.”

On the other hand,  Judge Chalfant wrote, “Gascón’s Special Directives cannot come as a surprise. He was elected with more than 1.6 million votes on a platform of reform-minded and less punitive approaches to a variety of conduct, including serious offenses previously punished with extreme prison terms.”

On this same topic, the judge quoted from another amicus brief, this one supporting the Los Angeles DA.  (This particular brief was the one WLA wrote about previously, which was signed by a list of present and former prosecutors.)

This brief,  noted the judge, argued that the injunction request “is at bottom an attempt by ADDA to prevent the [LA district attorney] from making policy decisions with which they do not agree. Yet, district attorneys, not their deputies,” Chalfant concluded, “are accountable to the people and community they serve.”

Meanwhile, there is another piece of news regarding the justice reform strategies being introduced the LA District Attorney’s office.  We have learned that the Loyola Social Justice Law Clinic, the umbrella organization under which Loyola Law School’s other highly-regarded pro-bono law clinics live, will be instituting a new database under the direction of the clinic’s executive director, Elizabeth Bluestein, which will be a repository of data, the purpose of which will reportedly be to keep track of the effects of Gascón’s new reform strategies.

“George made a promise to be transparent,” said Loyola Law Professor Chris Hawthorne, who is the director of Loyola’s Juvenile Innocence and Fair Sentencing clinic, and one of the cluster of attorneys whom WitnessLA consulted about Judge Chalfant’s ruling, and the fate of the new reforms.

“Part of that transparency,” said Hawthorne,  will be “keeping data on how the rollout of these policies work.”

For those of us with an attachment to facts and data, this sounds like a cheering concept.

As for the ruling, Professor Hawthorne had this to say.

“It is a partial victory for the ADDA, but a lot of directives still remain in place,” he told us. “And going forward the culture of the office will indeed change — directives or no directives.”

This is in order, said the statement from Senator Cortese’s office, to “ensure that the death penalty and life without the possibility of parole cannot be imposed on those who did not kill,” and those who did not “intend that a person die, during a crime.”

If passed, SB 300 will reportedly provide recourse to hundreds of people convicted under the “felony murder special circumstances law” that are currently awaiting execution or condemned to die in prison.