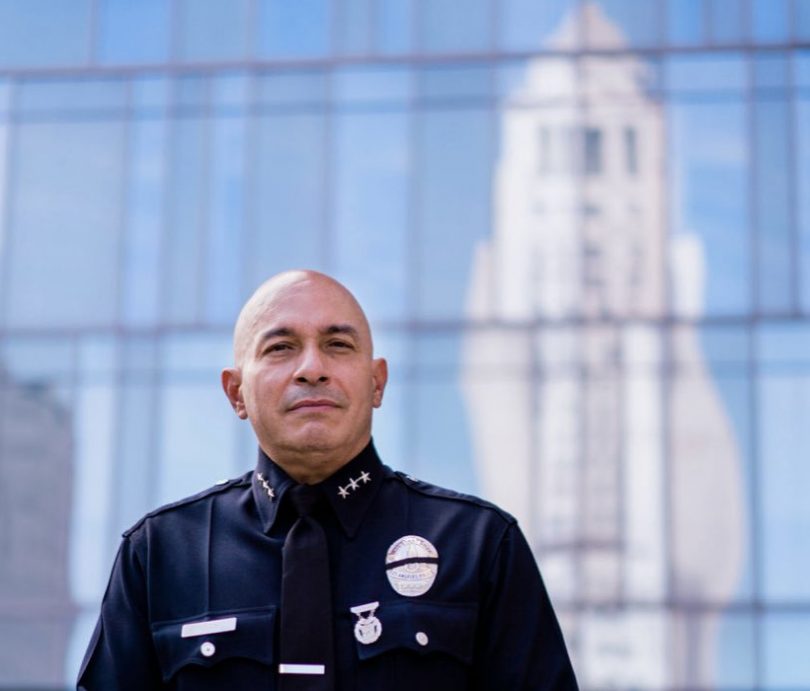 On Monday, February 1, Los Angeles County District Attorney George Gascón administered the oath of office to Robert Arcos, who will serve as chief of the DA’s Bureau of Investigation

Arcos is an interesting choice.  He has been with the Los Angeles Police Department for 32 years, and was one of three candidates  who were short-listed to be the chief in the spring of 2018, after former LAPD Chief Charlie Beck resigned.

Mayor Eric Garcetti ultimately chose Michel Moore to lead the department.  Yet, Moore wisely promoted Arcos  to the position of first Assistant Chief, meaning until he retired on Sunday, January 31, he was the person running most of the day-to-day operations of the LAPD, including overseeing patrol. 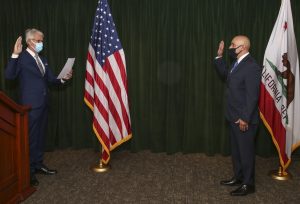 Now Arcos is coming to the Office of the District Attorney.

Interestingly,  with more than 300 sworn officers, the Bureau of Investigation for the DA’s office is the fourth largest law enforcement agency in Los Angeles County.  Basically, the officers under Arcos will support the investigative work of  approximately 1,000 deputy district attorneys.

“Bobby Arcos brings a depth of law enforcement experience and compassion to the District Attorney’s Office,” said Gascón of his new hire.

“I am proud that Bobby has agreed to join my executive management team and will help me fulfill my promises to voters that we will protect our community by preventing crime, reducing recidivism and restoring victims. Together, with other members of the team, we will rely on data, science and research to guide this office into the future.”

Whether having a well-liked and extremely experienced leader in the world of LA law enforcement working for the new DA will soften the criticism of the law-and-order elements of Los Angeles will remain to be seen.

And while we’re on the topic of criticism, in other DA news, on Tuesday, February 2, there will be a hearing regarding the application for a preliminary injunction filed by the Los Angeles Association of Deputy District Attorneys against Gascón in the hope of preventing him from following through with many of his reforms, which the LA ADDA has characterized as radical and plainly unlawful.

For this who have forgotten,  when George Gascón was sworn in on December 7, after defeating the incumbent, two term DA Jackie Lacey, right away he announced a list of reforms that were in keeping with his campaign promises.  The changes were labeled Special Directives, and were posted on the DA’s website.

Among the new directives were announcements that the DA’s office would no longer charge juveniles as adults, nor would it seek the death penalty. The Gascón-led office would not charge many low-level first time offenders. DA Gascón would eliminate cash bail. (In the case of those accused of murder and other violent felonies, prosecutors would seek detainment, not bail.)

In addition, the new DA launched a victim services group, and a supercharged sentencing integrity unit that would, “in good-faith” perform case reviews,” and when necessary “remedy wrongful convictions, and take any remedial measures necessary to correct injustices uncovered, within the bounds of the law.”

And, Gascón would, he announced, for the most part get rid of nearly all sentencing enhancements, including certain parts of California’s three strikes law, the California STEP Act (which allows for the lengthening of a sentence if the defendant is believed to part of a street gang), 10-20-life,  which drastically lengthens sentences if a gun is involved, even if the defendant never held nor fired the gun, plus other sentencing strategies that can add years or decades to someone’s prison term, far in excess of what the range of sentences that the commission of certain crimes already requires.

The matter of sentencing enhancements in particular, caused energetic pushback among certain prosecutors, and victims rights organizations, which persuaded Gascón to modify his directive on sentencing enhancements for hate crimes, certain financial crimes, elder and child abuse, and sex trafficking, after meeting with the various groups.

Nevertheless, the attacks have kept on coming, most claiming that truly dangerous people who have committed terrible crimes, will not be appropriately sentenced under DA Gascón’s directives, thus doing profound harm to public safety, while ignoring the needs of victims.

Many prosecutors and legal experts do not agree, as was demonstrated last month when a group of 65 prosecutors from all over the U.S., many of them high profile DA’s from large U.S. cities, lined up behind Gascón to say that his changes were not a threat to public safety, and they were perfectly lawful.

This broad group of prosecutors expressed their views in the form of an Amicus Brief in support of Gascón and his team against the ADDA’s attempt to gain an injunction against many of the new DA’s new reforms,  a matter that will be heard on Tuesday in the court of Judge James C. Chalfant.

Naturally WitnessLA will be observing the 1:30 p.m. hearing virtually, and we will report back to you.

Photo of Robert Arcos in his former office at the LAPD, on his retirement day, January 31, 2021, via Robert Arcos Twitter