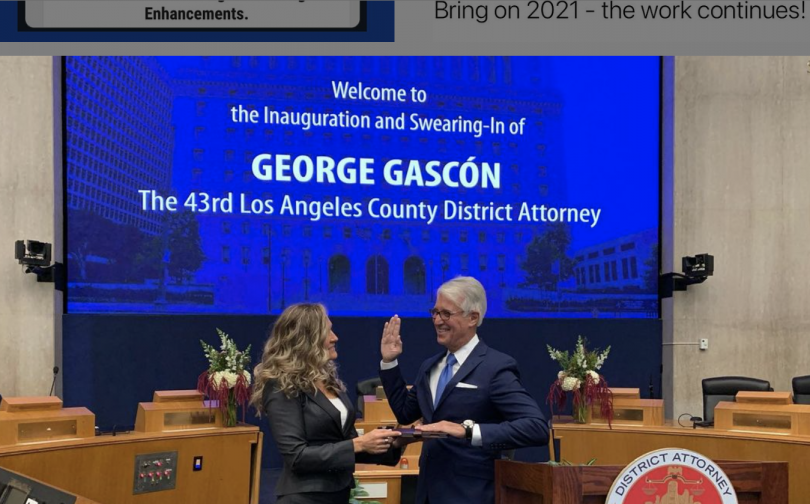 On Tuesday, Feb. 2, there was a two-hour virtual court hearing pertaining to the LA Association of Deputy District Attorneys’ legal filing. with which the ADDA hopes to get a judge to prohibit Los Angeles District Attorney George Gascón from instructing the prosecutors who work for him to follow his new reform-minded “directives.”

At the end of the hearing — which featured lengthy arguments by at least three of the union’s high powered, and generally very expensive hired lawyers, countered by arguments from the also well-resuméd  Robert Dugdale, the attorney representing the DA’s office — Superior Court Judge James C. Chalfant pronounced himself “exhausted.”

Chalfant did say, however, that he planned to have a ruling by the end of the week.

How we got here

The case before Judge Chalfant, who appeared to have already read most of the underlying caselaw on the matter, is roughly as follows.

In the November general election, former San Francisco DA George Gascón, who is also a former longtime cop, ran to become the Los Angeles District Attorney on a reformist platform, and defeated two-term incumbent Jackie Lacey by a reasonably margin. He was sworn in on December 7.  And right after that, he announced a list of reforms in keeping with his campaign promises. The changes were labeled Special Directives, and were posted on the DA’s website, for all to check out.

Many of the rank-and-file prosecutors welcomed the reform.  But lots of others did not. One of the most controversial reforms, when it came to some of the prosecutors who were suddenly working under the new guy, was his decision to not to make use of any sentencing enhancements, including California’s three strikes law, the California STEP Act (which can lengthen a sentence if the defendant is believed to part of a street gang), 10-20-life (which drastically lengthens sentences if a gun is involved, even if the defendant never held or fired the gun and didn’t commit the underlying crime, but was present), plus other sentencing strategies that can add years or decades to someone’s prison term, in excess of what the range of sentences that the commission of certain crimes, particularly serious crimes, already requires.

For some, the modifications were not enough.  At the end of December, the LA ADDA filed their petition to the court for a writ of mandate that would prohibit Gascón “from forcing compliance” by the county’s deputy district attorneys with his recently-enacted special directives that the union called “not merely radical, but plainly unlawful.”

Much of what the ADDA used to bolster its case was the argument that, particularly when it came to the state’s infamous three strikes statute, a local district attorney couldn’t just unilaterally decide not to use three strikes without breaking the law. Furthermore, if the concept of prosecutorial discretion did apply, it could only be used case by case, not as a “blanket” directive stating that nobody in the office can apply three strikes. This blanket approach did not fall into the realm of “prosecutorial discretion,” the ADDA contended.

Even worse, argued ADDA attorney David Carroll, who did much of the talking for the union at the hearing, the new DA was putting Deputy District Attorneys in the position of having to violate the law by following Gascón’s directives.

When it was Robert Dugdale’s turn to rebut the ADDA’s position, the lawyer for the DA’s office first went after the union’s standing, or lack thereof, to even file this petition for a writ.

“The union has not come close to establishing standing,”  Dugdale told the judge.

The ADDA’s only argument about standing, according to Dugdale, was a brief mention in the filing where the union pointed out that they were the collective bargaining entity for the deputy DAs. And, he said, even if their dissatisfaction with the directives could be addressed under bargaining, “there’s a grievance process.” But the ADDA didn’t use the conventional process. Instead ‘they ran to court,” Dugdale said.

After some back and forth, the judge seemed less interested in addressing the matter of standing than in the underlying issues of the filing itself, which, after all, was the point. So Dugdale appeared to wisely shift gears.

Dugdale said that the ADDA was quite wrong in its limited view of prosecutorial discretion.

Instead, he said, a pile of caselaw has recognized that, when it comes to sentencing enhancements, “prosecutorial discretion is at its height. ” The attorney then ticked off a list of examples.

One of Dugdale’s primary arguments was that the issue at hand was one of “separation of powers,” due to the fact that an elected district attorney was an executive officer of the county.

As such, he said, the California Constitution invests the district attorney with “unique powers.” This meant, Dugdale said, if the state legislature passed a law that compelled a DA to do “this and such,” it would create a separation of powers conflict with the state constitution.

So where does that put those who work under him, the judge wanted to know.

“What happens to an assistant district attorney,” asked Chalfant, “who goes to the DA and says I can’t in good conscience do this?”

Dugdale said that, under the directives, there was nothing stopping a prosecutor from expressing their objections. There was no punishment.

On the other hand, several prosecutors have already simply refused to follow the new guidelines, and said so in court, and in some cases, on local TV.

(For an interesting example of one of these instances, see this excellent story by Frank Stoltze of LAist and KPCC, which also shows the anguish of a woman who wants those who shot and killed her godson to get the harshest possible sentences.)

Near the end of the hearing, there was some additional back and forth between the two camps and the judge over case law, but by a little after 3:30 p.m., everyone seemed to have mostly finished.

And now we wait

“We hope that the court chooses to steer clear of setting a dangerous precedent by interfering with the elected DA’s well settled prosecutorial discretion,” said former federal prosecutor Miriam Krinsky of Fair and Just Prosecution, in an email sent soon after the hearing had ended.

“If DA Gascón’s policies fail,” she wrote, “or if the voters decide they don’t approve of his approach, he can be voted out of office at the next election. But in the interim, the court should allow him to do his job without interference and reject a legal challenge that is, at bottom, an attempt by some to assert their resistance to change.”

Members of local justice reform organizations were also among those who tuned in to the hearing.

“Continuing to try to defend ‘tough-on-crime’ sentencing enhancements when the lived experience of our community members, and the data, show that these approaches destroy lives and don’t reduce crime, is a backward, small-minded approach,” said Michael Saavedra, Community Engagement Organizer for Dignity and Power NOW.*

So what will Judge Chalfant rule?

It’s foolish to predict.  So, along with everyone else, we await his ruling, which will hopefully arrive by Friday.