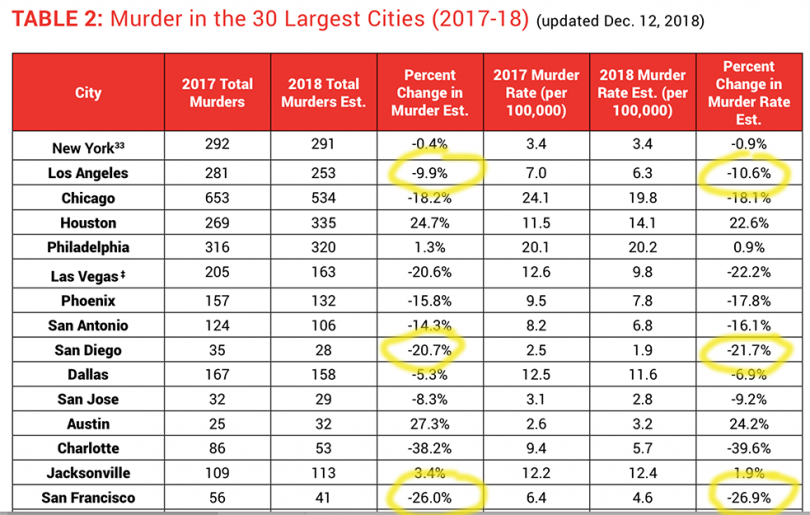 “For the first time in 5 years, violent crime and homicides are [down] in L.A.” Los Angeles Police Chief Michael Moore tweeted cheerfully on Sunday afternoon.

In fact, homicides are on track to be the lowest in 50 years in California’s largest city. 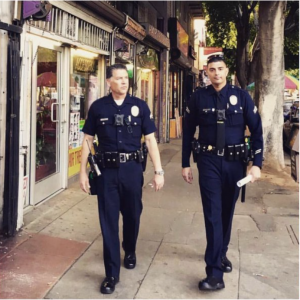 “This is not a coincidence,” Moore wrote, crediting “the hardworking men and women of the LAPD” who he said have “committed themselves to our crime-fighting strategy that hinges on treating public safety as a shared responsibility.”

In addition to the LAPD’s own numbers, data estimates released this month by the Brennan Center for Justice also show LA’s overall crime ending down for 2018 by 3.3 percent, with violent crime dropping 3.4 percent over 2017, and the homicide rate down by 9.9 percent.

Los Angeles County, which is patrolled by the LA County Sheriff’s Department, is showing numbers that are similarly down, according to the LASD-–with Compton as the only outlier.

In San Francisco, both the Brennan data, and the stats of San Francisco PD, show the homicide rate predicted to drop by 26 percent this year, coming close to the lowest number in more than 50 years.

“We are extremely pleased with where we are with violent crime at this point in the year, but there is still a lot of work to be done,” Police Chief Bill Scott told the San Francisco Chronicle. “There’s no magic formula, but what we try to do is implement strategies.”

(Scott, if you’ll remember, was a veteran of the Los Angeles Police Department, and was shortlisted in May of this year for the position of chief, which ultimately went to then-assistant chief, Mike Moore.)

San Diego’s murder rate is also down, although overall crime is up a bit, according to the Brennan Center report.

Oakland, too saw a slight dip in its homicide rate in 2018.

As Cindy Chiang of the LA Times points out in her story on the crime drop, when violent crime began climbing in 2014, there were many—including former LA County Sheriff Jim McDonnell-–who pointed to reform-minded ballot propositions like Prop. 47, passed in 2014, for the upward creeping stats, since Prop 47 in particular reduced many low level-felonies to misdemeanors, thus keeping certain lawbreakers out of jail.

As WLA reported in March of this year, a then-new study conducted at UC Irvine by Charis Kubrin, professor of criminology, law & society, and Bradley Bartos, a doctoral student in criminology, at UCI’s School of Social Ecology, argued that the blamed heaped on Prop 47 was misplaced. Prosecutors disagreed.

So why is crime down now? There is likely an interweave of causes but, when talking to the LAT’s Chiang, Kubrin suggested that better trust between law enforcement and the communities they police has been shown to be an important factor, according to a list of reports.

As it happens, both LAPD Chief Moore, and newly elected LA County Sheriff Alex Villanueva have talked a lot about the high value they place on community policing, and other strategies—like the LAPD’s 21st Century in Community Policing Initiative announced in October 2018—that increase productive relationships between officers and community members.