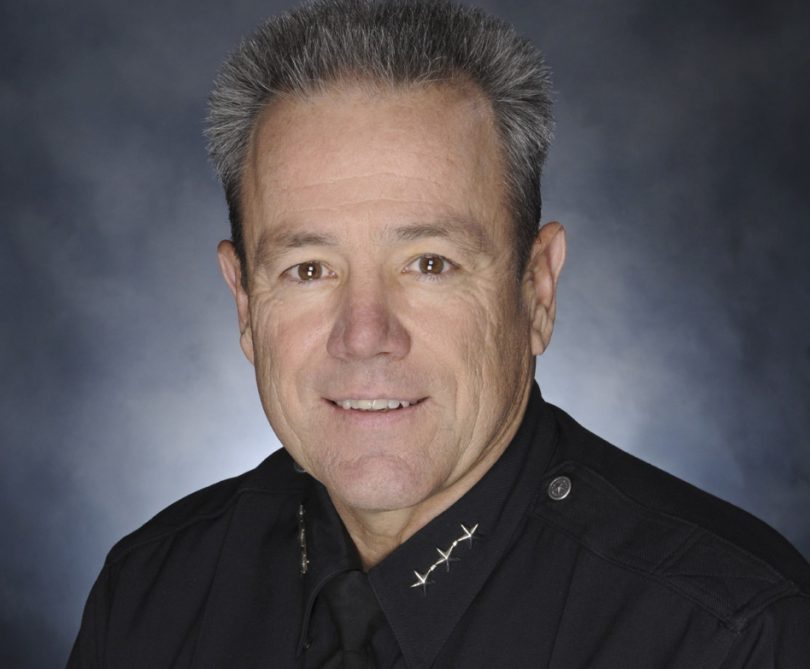 Mayor Eric Garcetti has chosen Mike Moore to be the next chief of the Los Angeles Police Department.

“We had three exceptional candidates,” Garcetti said, All “warm, intelligent and driven people.”

But he felt Moore was the right choice. “Mike Moore is one of—if not the most—qualified law enforcement professional in America,” said the mayor. “He has an intense loyalty to this city, and to this department. He’s known for his exceptional intelligence. He’s always the hardest working guy in the room. I’ve seen him evolve over the past decade and a half….

“This is a difficult moment for law enforcement in American history, Garcetti continued.  “We’ve done a pretty good job of keeping the peace. But we can all acknowledge that we need to do more the build that peace.

Too many communities of color” feel “disconnected,” said Garcetti. “We need to write the next chapter for the LAPD.”

And Moore’s the one to do it, according to the mayor.

“No one works harder, no one reads more. No one has a greater breadth of experience. Mike is a doer and a dreamer, a reformer and a thinker.”

The city’s 56th LAPD chief agreed in a tweet posted right before mayor’s announcement. “I have known and worked with Mike for over 30 years,” Beck wrote. “And am more than confident that he will continue to lead the #LAPD with heart and character.”

Credentials, smarts, and attention to detail

As First Assistant Chief, Moore was right under Chief Beck, overseeing operations for the nation’s second largest police department, and the person to whom Charlie Beck handed the keys to the agency whenever he was out of town.

Moore, a 36 plus-year veteran of the department, has managerial experience that the other two outstanding finalists, Deputy Chief Robert Arcos, and San Francisco PD Chief Bill Scott, for all their individual talents, could not really equal. Now 54, Moore was on the short list for chief in 2009, along with Jim McDonnell, and with, of course, the person who became the chief, Charlie Beck.

In fact, when the police commission gave their list to then Mayor Antonio Villaraigosa, the commissioners listed Moore first.

Although all three candidates Garcetti was considering have good credentials when it comes to working cooperatively with community groups to achieve violence reduction, Moore came to that party the earliest.

When he was a commander in the Valley Bureau working under then-Deputy Chief Ron Bergmann, Bergmann pioneered programs that paired local gang intervention organizations with LAPD programs, and Moore was the in-the-field guy who implemented the programs and became their public face.

After leaving the SF Valley for a year stint as Deputy Chief of the department’s West Bureau, Moore was transferred back to run the Valley Bureau after Chief Bergmann retired. There he continued and expanded community partnerships. That strategy, along with an early devotion to computer-driven crime mapping—COMSTAT—plus the intense attention to detail that characterizes his management style, is credited by many for the Valley’s sharp downturn in violent crime, which dropped a startling 28 percent in 2008.

Moore was given the department’s Medal of Valor. He understands the best and worst that officers have to face. He shot a suspect on two occasions, one of those times fatally.

In 2008, during a fire in Sylmar fire that decimated the Oakridge Mobile Home Park, Mike Moore quite literally helped rescued a woman from a burning building, under perilous circumstances.

He is a hands on guy who does not lead from afar.

In fact, Moore’s attention to detail is both his blessing and his curse. For instance, in 1998 he was assigned to take over command of the Rampart division of the LAPD, after that station had blown itself to smithereens following the arrest of Rafael Perez and the department-wide scandal that resulted. Moore succeeded in wrestling the place into better shape in many ways, earning praise. But his micromanaging leadership style put off some officers in the already deeply morale-challenged station.

Moore’s father was a Basque immigrant. After his mother and his dad divorced, his stepfather reportedly suggested he drop his father’s name of Sanchotena. Moore is nevertheless proud of his heritage, and listed on department rosters as Hispanic.

Yet finalist Deputy Chief Arcos is third generation Mexican American, and finalist SFPD Chief Scott, who spent 27 years at the LAPD before he moved north, is African American. Both had very strong supporters among powerful members of the Latino community, in Arcos’ case, and in South LA, for Scott.

Those will be loyalties that Moore will have to work to earn.

It was not a complete surprise that, shortly after the announcement of his selection, #BlackLivesMatter tweeted their dismay that Moore had been given the department’s reins.

Yet, Michel Moore is a leader who will challenge the status quo, as he said recently in an interview with KPCC’s Frank Stoltze.  But he also said that he knows he needs “to slow down and I need to engage others … I’ve also had to learn I am not always right.”

Those around Moore say they have seen the change, and we have seen it too.

“I’ve never been more invested in understanding this city,” said Moore in a slightly teary speech after the mayor finished praising him.

“Why do I want to be the next chief of police for this great city? It’s pretty simple. I wish to continue the momentum in building trust—particularly in communities of color—and improving public safety while we build a more diverse and representative department….”

He pronounced the LAPD, and its men and women, the best department in the world, “even if we don’t always get the very difficult job right…”

The city council still has to ratify the mayor’s selection, but no one expects them to disagree.

We await the next chapter.