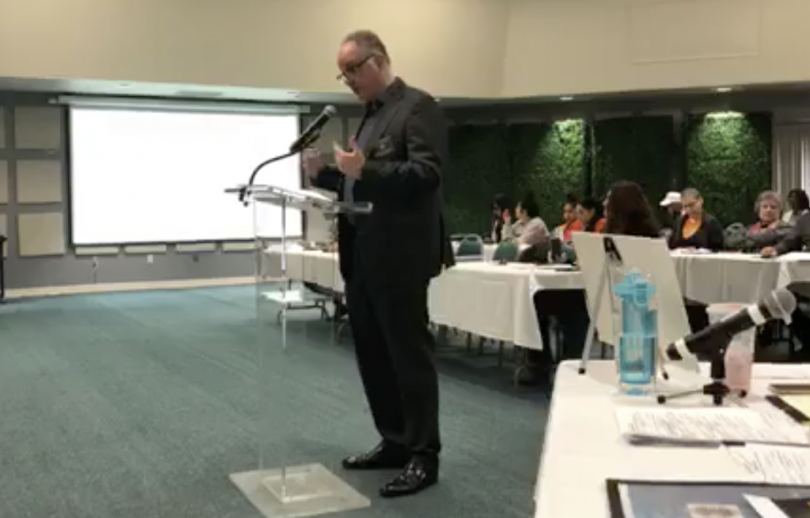 In an update to the Los Angeles County Civilian Oversight Commission (COC) about his review of allegations that deputies had harassed families whose loved ones died during encounters with the Los Angeles County Sheriff’s Department, LA County Inspector General Max Huntsman reported that he believed the problem to be one of management and policy, rather than just an issue of individual deputies behaving badly.

Last November, grieving family members gathered at the monthly LA County Civilian Oversight Commission meeting to report incidents of harassment and intimidation from deputies at the Century Station, and most prominently, the East LA Station, the home base of the notorious Banditos deputy gang.

Many of these families who told of being targeted protested the way their loved ones died, and had filed lawsuits against the department.

Those who addressed the commission in November spoke of heavy LASD presence at their family members’ funerals and memorial sites. Deputies, the speakers said, taunted those in attendance, made rude hand gestures, laughed and, in at least one instance, made arrests, as family and friends gathered to grieve their loss. 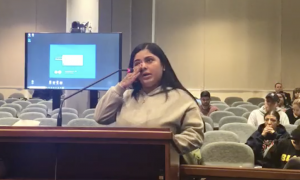 Returning to the commission meeting this past Thursday, Huntsman said he was partway through his review of the situation. He had encountered some roadblocks from the sheriff’s department, however, and wasn’t sure what of the status of the department’s investigation.

In response to questions from the OIG and the COC, Assistant Sheriff Steven Gross said the department’s investigation would be completed “in short order.”

When pressed by COC Chairperson Patty Giggans as to an estimated time frame, Assistant Sheriff Gross said he would have the results of the investigation ready by the next commission meeting in February.

Gross stressed, as he did during the November meeting, that the department would not tolerate harassment of any kind.

Not an Issue of Individual Deputies Behaving Badly

From what Huntsman could tell of the LASD’s progress over the last two months, the department was investigating the harassment claims on a case-by-case basis, despite requests from Huntsman and the commission that the investigation also step back and look at the larger picture.

“I don’t think, from what we’ve learned so far, that this is a problem of [individual] deputies harassing the public,” Huntsman said Thursday. “I think what it is a problem of, is the sheriff’s department not communicating to deputies what the ground rules are, and what they should or shouldn’t do.”

Huntsman noted that LA County Supervisor Hilda Solis had repeatedly called for a new LASD policy that would protect a family’s right to grieve the loss of a loved one killed during an encounter with the sheriff’s department.

“I realize from the sheriff’s department’s view, that person may have been a criminal who threatened a deputy’s life. And that may be absolutely true.” Regardless, Huntsman said, “you can’t expect the family of a person who has died to wholeheartedly embrace that concept.”

“It’s a community policing issue, Huntsman said. “We have to come to a place where we can treat all people with respect.”

“That is what the Family Assistance Program is about,” said Huntsman, referencing an initiative of the LA County Supervisors to improve the communication and trauma-informed support to families left behind after someone dies in custody or after officers use fatal force.

In the same way, the IG continued, “the sheriff’s department needs, as a department, to come up with a way to let people grieve without it becoming an us-versus-them battle.” In this way, “law enforcement becomes what it should always be, which is a neutral arbiter,” both “trustworthy and reliable.”

Huntsman said he didn’t believe that the deputies involved “acted in a vacuum,” and thus, the sheriff’s department shouldn’t treat the issue as a handful of isolated cases.

The sheriff’s department had given the OIG the individual complaints that some of the families had formally submitted to the department. The LASD’s investigations into all but one of the complaints had been closed, according to Huntsman.

“For the most part, investigations seemed to have been done in good faith” according to the inspector general, but, in a handful of cases, he said he found “a troubling failure to collect apparent video evidence.”

The OIG’s review of the alleged harassment issue is still in progress, however.

So far, Huntsman said, “it appears as though” the responsibility “has been dumped entirely upon the deputies … with no guidance or support from above.”

The department, he said, must not leave the matter to “frontier justice” of deputies “whose friends and coworkers have been involved” in a fatal use of force.

It’s not surprising, given the sheriff’s department’s culture of secrecy — a culture Sheriff Villanueva has embraced — that there would be secret deputy groups, and that the county’s agents of oversight would be met with more secrecy as they work to “lift the veil” currently sheltering those deputy subgroups, Huntsman said.

For those unfamiliar, in September 2018, members of the East LA Station’s Banditos put some of the station’s newest deputies in the hospital in the course of a brawl that occurred during an off-duty party. The Banditos have also been accused of harassing and retaliating against coworkers, enforcing illegal arrest quotas, and a host of other horrible things, some of which were detailed in a lawsuit filed last September.

Last year, Villanueva vowed to take action against the deputy gang problem by issuing a specific new policy banning such groups, but Huntsman couldn’t track down the policy more than six months later.

In June 2019, during a media open house at the Hall of Justice, Sheriff Villanueva shared a draft policy update banning his staff from being part of “any group which promotes conduct that violates the rights of employees or members of the public or otherwise encourages conduct that is contrary to Department policy.”

This policy, Villanueva said, was history-making, a milestone “30 years in the making — or 30 years overdue.” 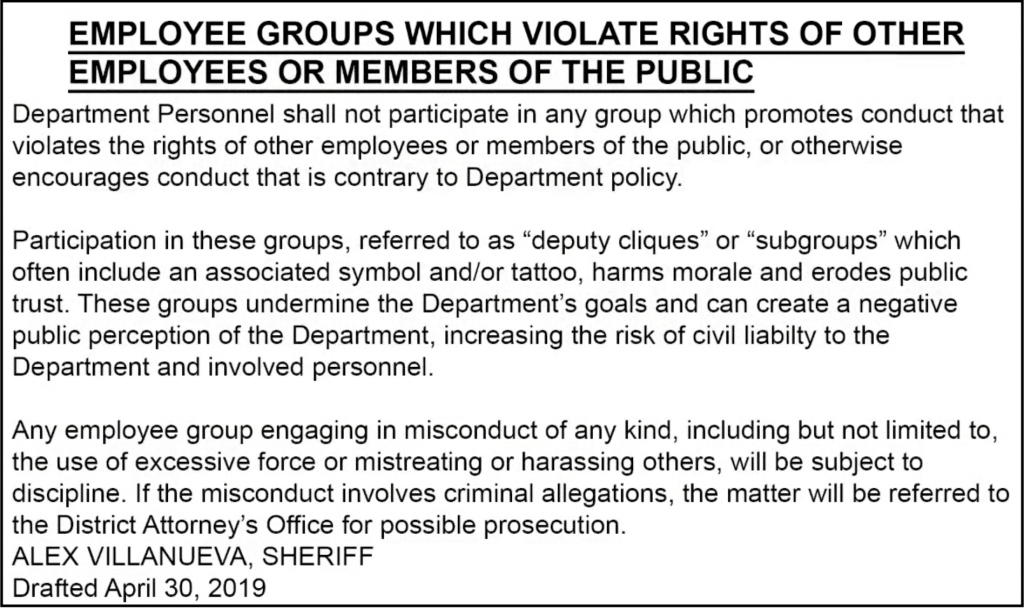 Villanueva told the assembled reporters that events from decades past, but also more recent incidents reinforced the need for such a policy that goes beyond the department’s standard discipline policy for misconduct.

The decision to draft this policy, the sheriff told reporters, was “not in response to the oversight commission,” but something that the department had to do “regardless if anyone had input or not.”

Villanueva also said the policy had “gone through the vetting process,” noting that another policy was still tied up in negotiations with the bargaining units.

Yet, more than six months later, the whereabouts of the policy were still not clear to IG Huntsman.

But when the inspector general dug into the department’s Manual of Policy and Procedures, he was confronted with a mysterious absence.

The policy number the LASD cited “doesn’t exist,” Huntsman told the commissioners. “It’s not there. There’s no such policy.”

When the OIG inquired again into the policy’s status, the department reported that it was still in negotiations with the unions, a stage of the process that the department had previously indicated had already been completed.

On Thursday, Assistant Sheriff Gross told the commission he believed the policy remained in the union phase.

On Thursday, COC Chairperson Patty Giggans asked Gross when the commission could see the policy, and what specifically made a policy an official and accessible to the public.

Assistant Sheriff Gross responded that the road to vetting and finalizing LASD policies was a long and arduous one through risk bureaus, to County Counsel for review, to the unions, and to management for final approval.

Giggans noted that the commission had been working to address the “critical” issue of deputy gangs for three years already, with both former Sheriff Jim McDonnell and now Villanueva.

“I just have to reiterate how our concern is not going away, and I would like to have … a monthly update at our meetings about where this policy is,” and when it will be on the books.

The problem of the LASD’s secret cliques “has to be resolved,” Huntsman said.

New deputies don’t come into the department with “a choice about whether or not to be a part of this structure,” Huntsman said. Every deputy on the force today joined a department in which such subgroups have persisted for 50 years. “It’s a management problem that needs to be addressed,” he said.

“I hope that the Sheriff’s policy goes into effect soon, I hope that it is enthusiastically enforced, and I hope it is embraced by the deputies’ union,” Huntsman said.