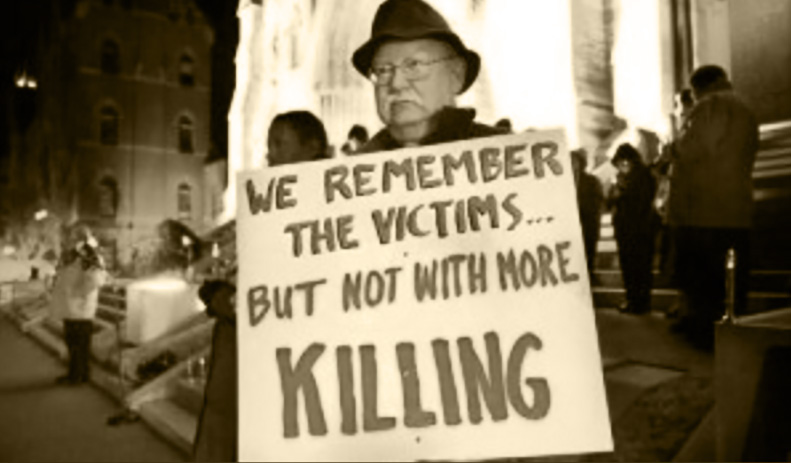 Getting rid of the federal death penalty has become a critical issue now that the new president is in office.

The push to rid the nation of the federal death penalty is coming from — among others — reform-minded prosecutors, and law enforcement leaders, working and retired.   This trend was demonstrated on Monday, January 25, when 100 Criminal Justice leaders — among them George Gascón, and two former Los Angeles District Attorneys , Gil Garcetti and Ira Reiner — sent a letter to President Joe Biden bring him to end the federal death penalty by commuting the sentences of all federal prisoners on death row, dismantling the federal death chamber in Terre Haute, Indiana, stopping capital prosecutions — and, to whatever degree possible, supporting state efforts to end the death penalty as well.

(Twenty-two states have already eliminated capital punishment, with the state of Virginia moving rapidly in that direction.)

Also this week, 45 members of Congress  sent a letter to U.S. Attorney General-Designate Merrick Garland urging him to “prioritize the administration’s commitment to abolish the death penalty” and to “ incentivize states to end capital punishment” across the nation.

The letters should find a warm reception with the nation’s new chief executive in that, during his campaign, President Joe Biden promised repeatedly to end the federal death penalty.

Yet, even prior to Biden’s inauguration, the issue developed new urgency during the summer of 2020 when former president Donald J. Trump was suddenly in a rush execute 12 men and one woman before his term in office ran out the clock.

His list of death row inmates to be put to death included controversial cases that prompted attorneys and others who still support capital punishment to speak out for clemency.

As WitnessLA has written in recent weeks, before Trump went on his capital punishment binge, the U.S. Government had not executed anybody at all since 2003.

Going back still farther, the federal death penalty was declared unconstitutional in 1972 following the decision of Furman v. Georgia, in which the U.S. Supreme Court found that the death penalty violated the Eighth Amendment’s ban on cruel and unusual punishment, and the Due Process Clause of the Fourteenth Amendment to the U.S. Constitution, adding that it was applied in a manner that disproportionately harmed minorities and the poor.

In 1988, however, as the mood in the country shifted toward what would become a two-decade law-and-order frenzy, capitol punishment was reinstated with the Supreme Court ruling of Gregg v. Georgia. Yet, the reinstatement applied to very few crimes. Then in 1994, the U.S. Congress expanded the number of capital federal offenses to about 50, courtesy of a bill that then-Senator Biden had sponsored.

Last summer all that changed when Donald Trump put the Terre Haute execution chamber back in business, and didn’t let up until mid-January, when — despite an impressive pile of lower court stays, with one particularly well-written stay delivered by a Trump appointed federal judge — the Trump-packed U.S. Supreme Court struck every stay down, and the executions preceded ASAP once they did, often taking place in the wee hours, in order to stay on schedule.

And so it was that the last three of the 13 scheduled executions were accomplished before the January 20, cutoff date when a new president likely would have put a merciful monkey wrench into the killing of Lisa Montgomery on January 13, Cory Johnson, on January 14, and Dustin Higgs on January 15.

“Over the past year, we witnessed thirteen federal executions, all an assault on human dignity and an affront to American values,” stated the letter from prosecutors and other justice officials —  including a bunch from conservatives states, including two DA’s from Mississippi, and five head prosecutors from Texas, at least four of them from that state’s top ten most populous counties.

“This killing spree laid bare the unacceptable injustices embedded in our nation’s use of the death penalty,” the 100 signiture letter continued. “We watched as our government killed people with severe intellectual disabilities, people who had worked for decades to take responsibility for their crimes and rehabilitate, and a woman with an unspeakable history of abuse and trauma. These tragedies demand bold and definitive action.”

The bill, which has 58 co-sponsors, as if this writing, was brought forward after the victories in the two Georgia Senate races suggested that legislation of this might find success.

“While we’re in the midst of this national reckoning on racial justice, abolishing the death penalty must be a part of that discourse but also our legislative actions,” Pressley said of the new bill.

Most Americans say no to state and federal executions

The push to finally become one of the world’s nations to have eliminated the use of the death penalty is supported by the majority of the American people.

According to Gallop — which has been polling Americans on the topic of the death penalty since 1985 — as of 2019, 60 percent of the U.S. public  favors life in prison over the death penalty, even when it comes to the worst of crimes.

“Our bill follows the lead of 22 states, including Illinois, by finally putting an end to this failed and unjust policy,” said Durbin, who together with Pressley, called capitol punishment “deeply flawed” and “disproportionately imposed on Black and Brown and low-income people in America.”

No more for profit prison contracts

Last Wednesday, the topic of federal executions came up in a White House briefing when press secretary, Jen Psaki, was asked about the timing of Biden’s commitment to ending the federal death penalty.  Psaki said that she didn’t have updates on any immediate plans of action.

Meanwhile, today,  Tuesday, January 26, President Biden did sign an executive order instructing the new management at the Department of Justice to allow its contracts with for-profit prison companies to expire.

The executive order “will ultimately end the Justice Department’s use of private prisons, an industry that houses pretrial detainees and federal prisoners,” Biden said Tuesday in remarks on his racial equity policy agenda.

As it happens, almost immediately after his 2016 election, Donald Trump, had speedily re-upped a pile of private prison contracts after Barack Obama had gotten rid of any contracts with the private institutions that, right now, incarcerate about 14,000 people—which is about nine percent of the 142,000 federal prison population.

President Biden’s move reportedly could pave the way to also eliminate from federal use the for-profit jails run by private prison companies, which are right now under contract with US Marshals Service, to detain individuals who are waiting to be tried, or to be transferred to prison.

“This is a first step to stop corporations from profiting off of incarceration,” Biden said, after signing.

The order does not affect detention centers contracted by states or other government agencies, such as the Department of Homeland Security.

In October 2019,  however, Governor Gavin Newsom signed AB 32 , sponsored by Assemblymember Rob Bonta, D-Oakland, barring the California Department of Corrections and Rehabilitation (CDCR) from entering into or renewing any contracts with private prisons, after January 1, 2020, including immigration detention facilities.

“Private prisons profiteer off of federal prisoners and are proven to be—or are found to be by the Department of Justice Inspector General— to be less safe for correctional officers and for prisoners,” domestic policy advisor Susan Rice said at Tuesday’s White House event.

The new order is obviously not good news the private prison industry, which relied on federal dollars for “more than half of their revenue last year,” according to Mother Jones Magazine’s Julia Lurie.

(Mother Jones has arguably covered the issue of the private prison industry better and more rigorously than anyone else.)

Thus it was not surprising that, during the 2020 election, given Joe Biden’s frequently stated intention to pull back from for profit lock-ups, the two largest private prison companies, the GEO Group and CoreCivic,  threw piles of cash at Republicans, particularly at Donald Trump, according to MJ reporter Madison Pauly.

Yet, even though Donald Trump lost big, the investment paid off.  Before Trump’s defeat, both GEO Group and CoreCivic were able to finalize a cluster of 10-and-15-year-contracts with ICE, including one pertaining to Southern California’s notorious Adelanto Detention Center.

Private prisons aside, now, the pressure is on for President Biden to commute the sentences of the 50 or so people left on federal death row to to life-without-parole.  He can also direct the DOJ to instruct each U.S. attorney around the nation not to pursue capital charges for federal crimes.

And, according to justice advocates, he should also order the completion of a death penalty study the Obama administration left unfinished.

“President Biden is the first president to openly oppose capital punishment,” said Miriam Krinsky, Executive Director of Fair and Just Prosecution​, the organizer of the 100 signiture letter and a former federal prosecutor,  “and we now have an opportunity to permanently end the federal death penalty, once and for all.”

Photo via the National Coalition to Abolish the Death Penalty