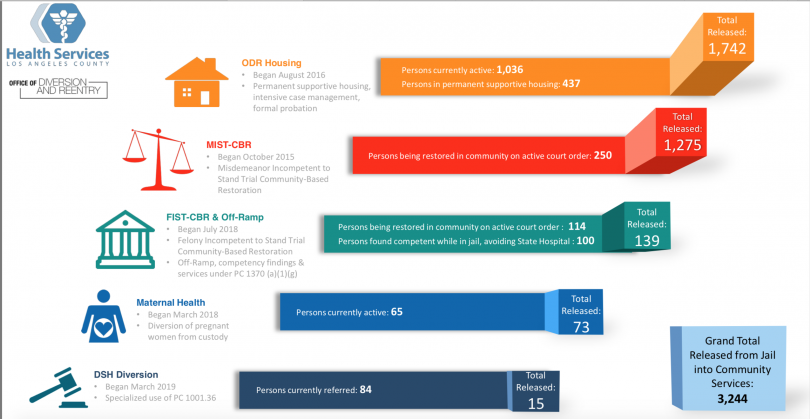 On Tuesday, the Los Angeles County Board of Supervisors directed the county’s Office of Diversion and Reentry to draft a plan for expanding the ODR’s innovative program designed to break the cycle of mental illness, incarceration, and homelessness, by diverting inmates with serious mental health issues and substance abuse disorders from jail and providing them with intensive case management and supportive housing—a strategy that supporters say has consistently managed to change lives for far fewer dollars than the cost of a stay in LA County jail or in a county hospital.

More than four years ago, on August 11, 2015, LA’s board of supervisors voted unanimously—and historically—to create the Office of Diversion and Reentry (ODR) within the Department of Health Services.

The 2015 motion, authored by Supervisors Mark Ridley-Thomas and Sheila Kuehl, authorized the executive director of the newly created ODR to oversee the county’s efforts to divert the mentally ill, homeless, and those with substance abuse problems out of the criminal justice system and local lock-up, and into appropriate housing and treatment.

Respected Los Angeles Superior Court Judge Peter Espinoza left the bench after 25 years to take the job as the leader of the ODR. 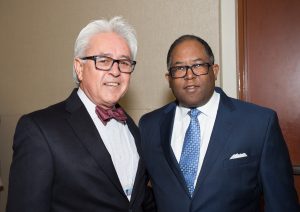 To date, The ODR’s programs and partnerships have diverted over 3,200 LA residents away from the county’s jails and into community-based recovery settings.

Yet, despite those 3,200 diversions, the number of people with serious clinical needs who still wind up in LA County’s jail system has continued to rise.

As of May 2018, according to the Office of the Inspector General, there was a total of 4,112 male and 934 female mental health patients in LA County custody.

This year, an estimated one-third of the men and women in the county jail system – approximately 5,300 people – suffer from mental illness.

Reform advocates, like the ACLU’s Peter Eliasberg, have repeatedly suggested that even the county’s high numbers may be undercounted.

(Even the Bureau of Justice Statistics estimates that 64 percent of the jail population nationwide has a mental health problem.) 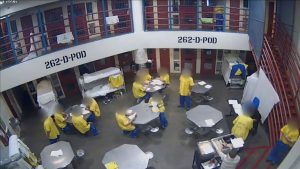 It doesn’t help that, according to several prominent studies, people with mental illness are more likely to be arrested than those without it, even when their conduct is the same, or in some cases, less serious.

Once in jail, according to the National Alliance on Mental Illness, those with mental health conditions stay longer than their counterparts without mental illness. They are also more at risk of victimization.

It should, therefore, be no surprise that those with serious mental illness do not stabilize or improve while jailed. Instead, they typically become much worse.

Inmates with mental illness, Eliasberg wrote last summer, “spend more time in restrictive housing and are disproportionately confined in solitary.” They are also likely to encounter “additional physical or emotional trauma,” particularly when their past traumatic experiences and general emotional conditions clash with jail life, as they most often do.

The good news is that, according to a recent report from the Department of Health Services,  56 percent of the 5,300 people in county lock-up who suffer from mental illness– nearly 2,900 people – may be eligible to benefit from ODR housing if the program is scaled up.

Help on the way

With all this and more in mind, Ridley-Thomas and Kuehl authored the new motion,  passed Tuesday, which instructs the ODR to create a plan to greatly expand its effective network of community-based services for those in need of diversion.

The new services will include more interim housing, more permanent supportive housing, and enough staffing for the ODR and its partners to actually make this expansion plan work.

According to Ridley-Thomas and Kuehl, at a cost of $70 a day per participant, the existing ODR housing has been successful in keeping 90 percent of its participants in stable housing for at least six months.  And ODR housing manages to provide its life-changing services for significantly less cash than a stay in one of LA County’s jails would have cost.

“Expanding ODR Housing will help us treat mental health and substance abuse disorders, tackle homelessness, and use taxpayer dollars more efficiently – all without compromising public safety,” said Ridley-Thomas, in an emailed statement. “We simply must double down on diversion because one cannot get well in a cell.”

Supervisor Kuehl called Tuesday’s action “a true inflection point,” not only for the Office of Diversion and  Reentry, “but for the county’s whole approach to justice,” she said.  “We now have abundant evidence that people with serious mental health needs can be appropriately and safely served in the community, instead of in jail. Today’s action is an expression of the Board’s seriousness in finding the resources to expand this very important work.”

Initially, ODR housing was available only to people whose cases were heard in the Superior Court’s downtown Los Angeles Central District.

Then starting last month, two additional courthouses began offering the program. This represented a geographical expansion but – without additional resources – it did not increase in the number of clients who could be served.

Tuesday’s motion hopes to address that problem with a plan to expand ODR housing to all of the 12 geographic districts within the Superior Court system.

“We are very excited to be working with the Board of Supervisors and our justice partners to expand the important work of diverting people from the jails into community-based care,” said the ODR’s Espinoza  “Our programs continue to demonstrate that housing stability and intensive care can reduce the endless cycle of homelessness, recidivism, and incarceration for our most vulnerable citizens.”

To demonstrate the widely-recognized worth of the diversion program, Ridley-Thomas’s office pointed to a former jail inmate named Leonard Brown, who was diagnosed with bipolar disorder, had repeatedly been homeless, and not-surprisingly kept cycling in and out of the county’s lock-ups.

“It’s a hard thing to say but jail had been like a second home,” Brown said in a statement.  “Getting released and not having an opportunity to participate in treatment – the cycle kept continuing.”

Since he became a participant of ODR Housing, said Brown, “I have been able to grow and get my life back.”

If you’d like a better idea of the difference that the ODR Housing makes in the lives of those it serves, check out the video above.