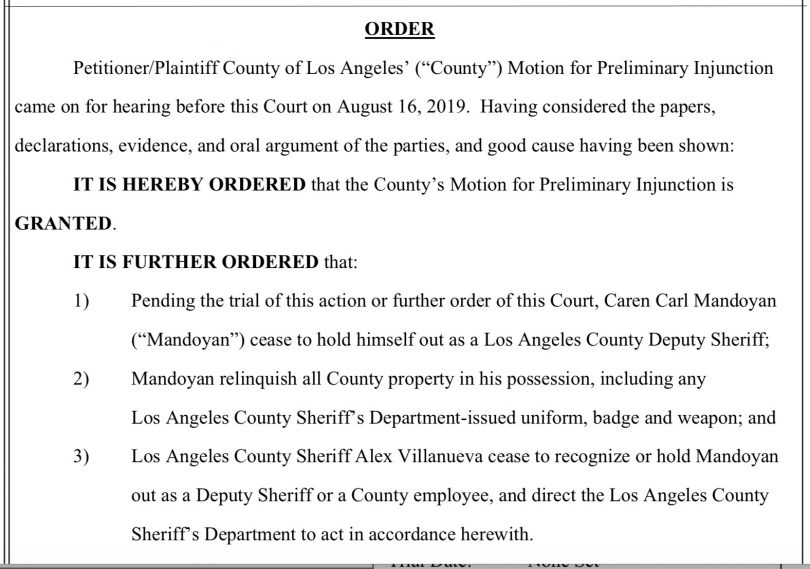 The ruling came after months of claims by Sheriff Alex Villanueva that he assuredly had the power to rehire Mandoyan, who the sheriff said been unfairly terminated by former sheriff Jim McDonnell.

“It’s the issue of due process,” Villanueva said at a March 2019 press conference referring to why he felt it was necessary to rehire Mandoyan. “And when it comes to defending and supporting the Constitution particularly the 14th Amendment, it’s very important.”

In his order, Judge Beckloff wrote that Mandoyan must now “cease to hold himself out as a Los Angeles County Deputy Sheriff,” that he must “relinquish all County property in his possession,” including his badge, his gun, and his uniform. 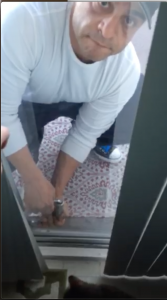 And, in case the rest wasn’t clear enough, Beckloff also ordered Sheriff Villanueva to “cease to recognize or hold Mandoyan out as a Deputy Sheriff or a County employee,” and that he should direct everyone else in the department to act accordingly.

Beckloff’s order is the newest development in the ongoing legal battle that began on March 4 of this year, when the board filed a lawsuit against Sheriff Villanueva arguing that the sheriff acted outside the scope of his authority in rehiring Mandoyan.

The lawsuit itself will be settled at a future trial.

Back in March, when the board first asked Judge Beckloff for a temporary injunction reversing Mandoyan’s hiring, Beckloff turned down the request.

Nearly five-and-a-half months, and multiple legal filings later, at a hearing last Friday, Beckloff hinted that this time he would side with the board on the matter of the injunction.

At the Friday hearing, although Beckloff agreed with the sheriff’s attorney that the Board of Supervisors could not interfere with the sheriff’s “prosecutorial and investigative duties,” the judge also made clear that, when it comes to rehiring a department member once he or she has been terminated, and that termination is affirmed by the Civil Service Commission, rehiring such a person is then subject to Civil Service Commission rules, statutorily speaking.

And Mandoyan’s firing was, in fact, affirmed by the Civil Service Commission. 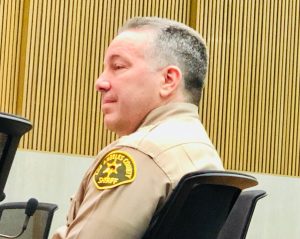 Sheriff Villanueva and March 12, 2019 board meeting discussing his Truth and Reconciliation program, telling the board that the Office of Inspector General would have a “front-row seat” for the process of evaluating any future disciplinary cases, which turned out not to be true./via WitnessLA

Specifically, the former deputy was fired by the LASD on September 14, 2016, for domestic violence, stalking his former girlfriend, and lying to Internal Affairs investigators about his actions.

Mandoyan subsequently appealed his termination to the Civil Service Commission.

After a five day hearing, which resulted in approximately 962 pages of transcription, and approximately 600 pages of exhibits, the commission’s hearing officer issued a 29-page report upholding the LASD’s decision to oust Mandoyan.

The deputy again appealed. And, on May 16, 2018, the five-member commission unanimously affirmed Mandoyan’s termination.

On Monday, Villanueva issued a statement saying he was disappointed by the ruling, but he has “immediately implemented the courts will regarding Deputy Mandoyan until a verdict is given at trial.”

Thus far, the court fight over Mandoyan’s rehiring has reportedly cost the taxpayers nearly $3,000,000 according to  Lisa Bartley and Miriam Hernandez, at KABC-7.

(Interestingly, when the sheriff was interviewed last Monday, August 12, by LA Weekly publisher Brian Calle, he guessed the legal price tag was up to $2 million.  He also said the department had no deputy gang problem. But that’s a discussion for another time.)

Even apart from the ruling, the past week has been unusually drama-filled for the sheriff. 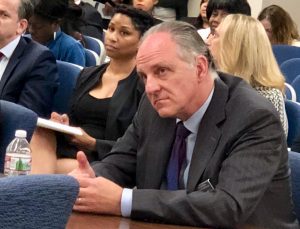 Max Huntsman, Los Angeles County Inspector General, at Oct. 2018 PRIT meeting, after speaking as a subject matter expert about the challenges of providing oversight for a large  public agency/viaWLA

Last Monday, August 12, each of the county’s board members received a letter from Undersheriff Tim Murakami. The letter informed the board that the sheriff’s department had opened up a criminal investigation of LA County Inspector General Max Huntsman and his office.

(The rest of LA learned about the investigation on Wednesday morning, August 13, when Lisa Bartley of ABC-7 also broke that story.)

According to Murakami’s letter, the department is investigating Huntsman for accessing confidential personnel files of high-ranking LASD executives, including those of Sheriff Villanueva.

Yet, the more one drills down into the information underlying this accusation, the less factually sound the investigation appears to be.

Added to the sheriff-bites-watchdog affair, on Tuesday night of last week, the members of the Los Angeles Democratic Club voted to issue a formal and very strongly worded rebuke to the sheriff that referred to “numerous complaints of abuse of his office” which have “eroded the trust of the public,” wrote the LADC.

Since the very active support of the LADC, and its multiple sister democratic clubs, was arguably a critical factor in the sheriff’s victory last year, the rebuke is not a minor matter.

On the topic of the sheriff and Inspector General Max Huntsman, a couple of incidents relate, at least tangentially, to Monday’s ruling on the rehiring of Mandoyan.

First, in the week of July 8 of this year, the Office of the Inspector General released an exhaustively researched analysis of the sheriff’s so-called Truth and Reconciliation Program.

The report specifically looked at how the program worked when it came to the controversial re-hiring of Carl Mandoyan.

In order to write the 34-page report, the OIG analysts reviewed well over 2000 pages of documents, plus photos, videos, interview transcripts and more (most of which WitnessLA has also reviewed).

This rigorous analysis led the OIG investigators to a series of detailed conclusions about the sheriff’s process in reinstating Deputy Mandoyan, among them the conclusion that many—if not all—of the claims that the sheriff made about how and why he came to rehire Carl Mandoyan have turned out to be provably false.

As it happens, a month prior to the OIG report’s release, Huntsman met with the sheriff about some other issues regarding transparency and cooperation between his office and the department, at which time Villanueva issued a threat. If Huntsman released the report on Mandoyan and the Truth and Reconciliation Program, he told IG, there would be “consequences.”

A month later, the OIG released the report.

A month after that, the undersheriff announced that the department was investigating Max Huntsman for criminal acts.