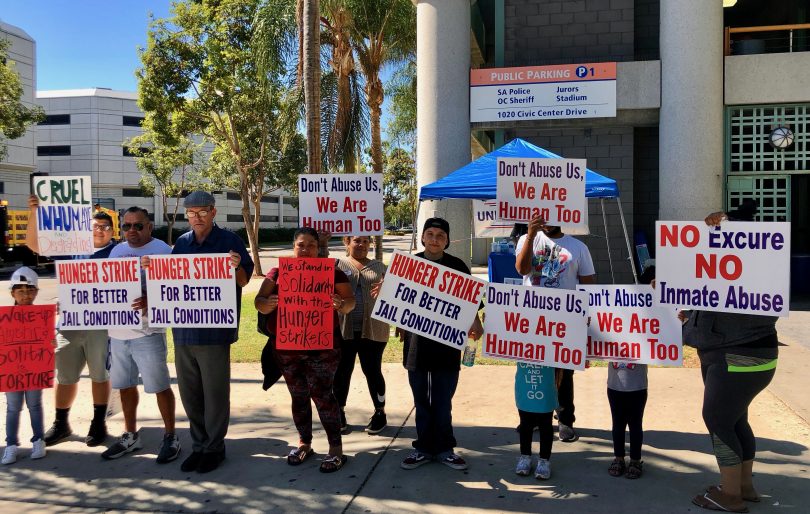 Reports that there is trouble in the Orange County jail system have been intensified by the newest inmate hunger strike that began on Wednesday, Oct 17.

This  is the second such strike at the OC jails this year, with both of the protests aiming to change conditions in the county’s five jail facilities, especially regarding what the strikers describe as an extreme overuse of solitary confinement.

The first strike, in which approximately 145 inmates participated for approximately three days, was in mid July. The organizers reportedly called it off, in order to reorganize for a second protest.

Undersheriff Don Barnes, who hopes to be elected Orange County Sheriff on November 6,  told reporters during the July hunger strike, that any allegation that the jails were mistreating inmates was “not valid.”

“It is not uncommon for the ACLU to make broad-based allegations in their attempt to get access inside custodial facilities that they will use for further manipulation,” Barnes said at a news conference. “That seems to be consistent with the ACLU’s actions.”

The OC Sheriff’s Department counted the newest group of strikers at 150.  But, Daisy Ramirez, the Orange County Jails Project Coordinator for the Southern California ACLU, put the number at over 1000 inmates on Friday, Oct. 19.

Over the weekend, some of the deputies working in the jails also gaged the number of strikers at 1000, or possibly more—a calculation that they based in part on how many meal trays came back untouched.

“We even heard that it may be closer to 1500,”  the ACLU’s Ramirez told WitnessLA.  “We talked to inmates who told us entire modules were refusing to go to chow.”

But, as in July, after day three of the strike,  the numbers began to drop said Ramirez because, according to inmates, deputies were telling them that their commissary—items inmates may order from the jail’s store-–would be confiscated, and that they would be moved to other housing locations to be medically monitored while they were on the strike.  As a consequence, according to Ramirez, strikers were fearful that they would be put into an isolation cell.

During the July hunger strike, she said, five of the inmate participants with whom the ACLU was in contact, were moved to cells that that, according to Ramirez, actually made medical monitoring more difficult. “These cells just have a solid door, and no emergency medical button on the inside,” she said. “This means they went from cells with glass doors, to smaller cells with solid doors, no windows, and no medical emergency button on the inside.  So they didn’t feel safe.”

According to a letter written by some of organizers (see below), the purpose of the current strike is to “peacefully protest extremely inhuman and tortuous practices by the Orange County Sheriff’s Department,” most specifically solitary confinement.

On Saturday, supporters of the strikers gathered to protest outside the Central Jail Complex in Santa Ana.

“Solitary confinement is torture,” said the ACLU of Southern California in a statement tweeted before the rally. “That’s why nearly 1,000 people at the Orange County Jail are going on their 2nd hunger strike of the year to protest the jail holding people in windowless cells 22 to 23 hours a day for months at a time.”

In addition, protestors said their loved ones are often deprived of visits and phone calls,  and retaliated against if they attempt to speak out about jail conditions.

Over the last decade it was often the Los Angeles Sheriff’s Department and the LA County jail system that made headlines for one scandal after another.

In recent years, however, in addition to the department’s catastrophe-laden jailhouse snitch scandal, reports of a problematic culture inside the Orange County Sheriff’s Department, most particularly in its jails, have persistently surfaced.

In the past month, department member sources and recent OCSD retirees, have approached WitnessLA with descriptions of  troubling incidents, and what they characterize as an unwillingness among certain higher-ups to crack down on corruption and wrongdoing.

In 2013, an Orange County Grand Jury investigation found—and expressed in scathing terms—that some OC sheriff’s deputies working in the county’s five jails routinely ignored inmates’ needs by sleeping and watching television in some of the guard stations, and allowing selected groups of inmates to punish other inmates with beatings.

Although, according to OC Sheriff’s department officials, the problems described by the 2013 Grand Jury  have long ago been corrected, jail sources told us of more recent incidents of similar misconduct toward inmates,  along with other forms of wrongdoing, that the rest of the department’s hardworking deputies often felt powerless to correct for fear of retaliation, or marginalization by superiors.

This June, one more Grand Jury investigation concluded that nearly half of the 34 deaths at the Orange County jail over the past three years could have been avoided if the sheriff’s department and medical staff paid more attention to health needs.In June 2017, the ACLU released a 104-page report alleging widespread corruption and abuse in the jail, which Sheriff Sandra Hutchins dismissed as a “purposely distorted view of the Orange County jails.”A few hours after the release of the 2017 ACLU report, Hutchins announced her intention not to run for another term,  thus clearing the way for her second in command and handpicked successor, Don Barnes, to announce his candidacy.

Running against Barnes is Duke Nguyen, a public integrity investigator for the Los Angeles County District Attorney’s Office, and an unknown quantity until he surprised department watchers by making it into the November runoff.