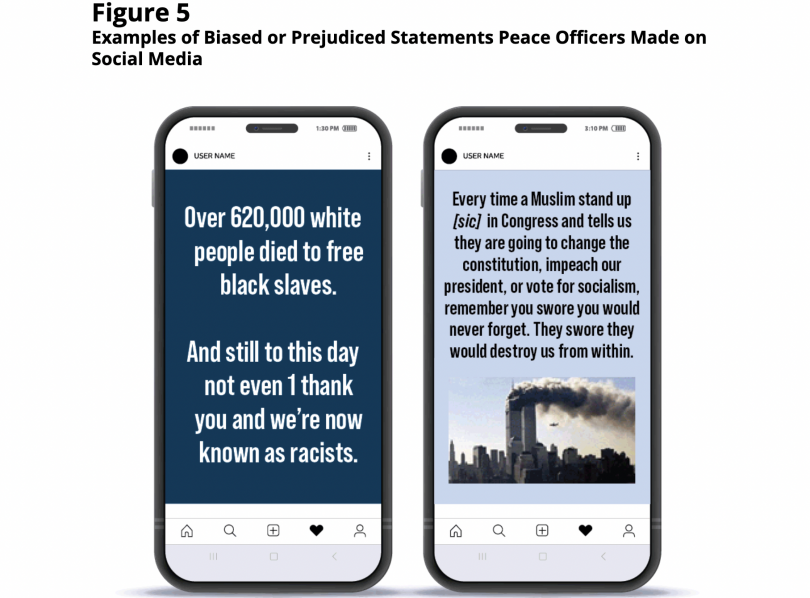 The other four agencies were the San Bernardino, San Jose, and Stockton Police Departments, and the California Department of Corrections and Rehabilitation (CDCR), which run’s the state’s prison system.

The auditor’s team looked at the online posts of approximately 450 officers across the agencies, and 25 investigations departments had undertaken in response to complaints from the public or colleagues about biased behavior or remarks.

The report highlights three cases in which incidents lead to internal investigations by the CDCR. One case involved a guard who filmed black incarcerated people while commenting “Black Lives Matter,” and who later explained that he said the phrase sarcastically. Video footage also showed this officer using the N-word off-duty, and saying, “For George Floyd,” sarcastically. Department leadership temporarily docked this officer’s pay.

In another case, an officer received an unpaid suspension and was made to take training after teasing an incarcerated young Black person about watermelon and chicken, and teasing another youth about dressing in a manner the officer deemed feminine and “gay.”

Another member of the CDCR retired during an investigation in which he admitted to making comments about Mexicans commonly being found behind bars, and about how a colleague perceived to be working slowly should, as a Mexican, be “used to working.”

Although the audit did not find that any officer was a member of a hate group, the team did note instances in which 17 different officers had made biased statements or else promoted biased content on social media platforms. Three of those officers were members of the LASD.

One officer posted that people standing against the (anti-Muslim, anti-woman) Proud Boys group were “in reality just against masculinity.” This officer also shared statements that were demeaning to transgender people and stereotyped Asians. Five other officers expressed support for problematic groups.

“The biased conduct we identified was generated by a small number of the officers at each department,” the audit stated. “Nevertheless, concluding on that basis alone that bias is not a significant problem at these departments would be incorrect for a number of reasons.” Not to mention, seeing blatant bias from even a small percentage of officers still erodes public trust in the whole department.

The audit team also pointed out that they might have been able to look at more biased conduct from the LASD if the department had implemented body-worn cameras like the other law enforcement agencies. “Expanding the use of body-worn cameras in custody settings,” the auditors added, “would improve Los Angeles Sheriff’s ability to effectively investigate allegations of officer misconduct.”

In one case, the state auditor was able to examine an incident only because the law enforcement officer involved recorded the events on his cell phone.

The agencies reviewed should also have stronger safeguards against and responses to biased behavior from officers, according to the report.

Neither the Stockton PD nor the CDCR even have policies prohibiting biased conduct among officers. These agencies, the audit said, should take action by “declaring that biased conduct is prohibited, describing in detail what constitutes biased conduct, and outlining key compliance mechanisms.”

Yet, while the other agencies have concrete anti-bias policies, words on paper are not enough to prevent bias.

Borrowing from best policing practices established by the U.S. Department of Justice, the Commission on Peace Officer Standards and Training (POST), and others, the audit issued a series of recommendations for combating bias among law enforcement. The recommendations include hiring a workforce that mirrors the diversity of the community, screening applicants for bias, improving bias training and promoting cultural awareness, involving the community in shaping strategies for combating bias, and better monitoring, investigation, and discipline for biased acts.

“Departments’ internal investigations often considered only the most blatant forms of bias,” according to the report. “In one such case, a member of the public filed a complaint about an officer’s social media posts. Although the officer’s posts endorsed potentially harmful stereotypes about Black parents and Syrian refugees, the department’s investigation concluded that it was ‘unable to find any racially derogatory remarks’ and that the allegation of prejudice was ‘clearly false.’”

Departments also too readily accepted officers’ denials that they engaged in bias, which the audit notes is a “poor investigative tactic.”

The LASD, San Bernardino Police, and Stockton Police also prematurely dismissed at least one complaint each about bias without addressing the behavior challenged in the complaint. In one example, an officer accused a Black man of playing “the race card,” then said he wished “we lived in a world, back in the 60s and 70s, where we could feel comfortable.” This statement, the audit notes, “overlooks the negative experiences of many Black Americans during that era.”

When the Black man said that a neighbor might have used a racial slur directed at him, the officer began listing other slurs aloud to demonstrate that using those slurs was protected as free speech.

The supervisor who investigated the resident’s complaint against the officer wrote that the officer “did an excellent job,” but could have used “a different remark other than ‘race card,'” because the complainant “could only focus on [that] remark.”

When the auditor’s team brought this investigation to the attention of a department sergeant whose unit investigates complaints, the sergeant agreed that the review could have been more thorough, but blamed a lack of guidelines about what constitutes biased conduct.

The four local departments, the audit said, clearly “lack a sufficient framework for investigating such issues.” San Jose PD was the only agency that referenced a bias-focused policy in its misconduct investigations.

While the LASD and San Bernardino PD have bias policies, their investigations into possible bias did not analyze whether conduct met the agency’s definition of bias.

As part of its response to the audit’s recommendations, the LASD said that establishing investigative and disciplinary processes to root out bias would be “difficult at best.”

The state auditor disagreed. “Los Angeles Sheriff already has a bias-free policing policy, which we discuss here and here,” said the response. “Therefore, it is already incumbent on Los Angeles Sheriff to have a thorough and consistent method for assessing whether its officers have violated this policy.”