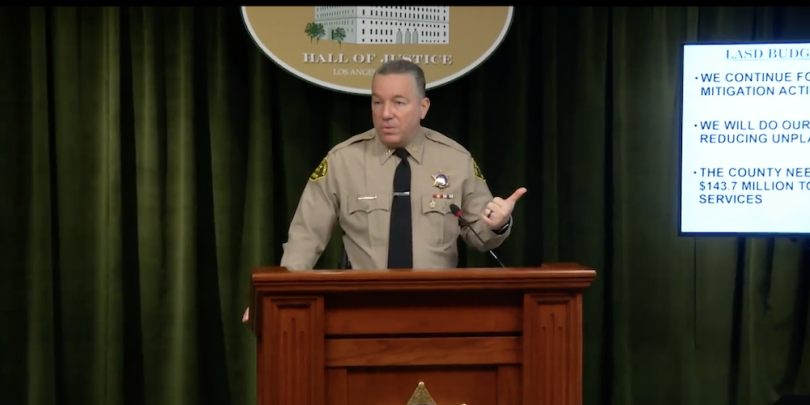 LA County District Attorney George Gascón announced on Thursday that his office had charged a Los Angeles County Sheriff’s deputy with perjury after the deputy provably lied two years ago about finding a gun in the front of a car.

“Lying under oath damages the credibility of law enforcement and creates doubt and mistrust by the public,” said Gascón. “The scales of justice must always remain balanced in a court of law.”

The deputy, Kevin Honea, 33, was charged with one felony count of perjury.

He is scheduled to make his initial court appearance today in Department 30 of the Foltz Criminal Justice Center.

The charge is based on an event that took place the night of May 24, 2019. Honea, who was stationed at the department’s South LA station was among a group of deputies who saw an Audie sedan leaving a Motel 6 in Gardena.

After calling the Audi’s license in, the deputies reportedly learned that the car had been used in a recent crime.

During a search of the vehicle, a stolen handgun was found in the vehicle’s trunk by another sheriff’s deputy, said prosecutors.

Honea is accused of lying during testimony at a preliminary hearing for the three men who were arrested in connection with the car and the gun, telling the judge he discovered the weapon in a box in the passenger side front footwell of the vehicle, carefully describing exactly where he found it, putting the firearm within reach of the front passenger and the driver, and resulting in the men being bound over for trial.

Unfortunately for Honea, a video recorded from a camera attached to a nearby building shows the search of the car. In the video, that the LA Times obtained, one can see as one of the other deputies — not Honea — opens the trunk rummages around, and finds a bag in the car’s trunk, which contains a smaller box, that, in turn, contains a gun. Once the gun is located, deputies can be seen cheerfully fist bumping and slapping each other on the shoulders, apparently at the gun’s discovery. Honea is among the fist bumpers, but had been no where near the trunk when the gun box was found.

Times reporter Alene Tchekmedyian, who has been on top of this case for months, reported in January that, at the preliminary hearing for the men, Deputy Honea was confident as he described opening another box that he found in the front seat of the passenger side of the car, and finding the gun inside that box.

But evidently when prosecutors looked at the video, they found it showed a completely different sequence of events, as you can see for yourself.

The LASD decided not to open a criminal investigation against Honea. Instead he was reportedly cleared by the department’s Internal Affairs Bureau of lying at all.

The case remains under investigation by the District Attorney’s Bureau of Investigation.