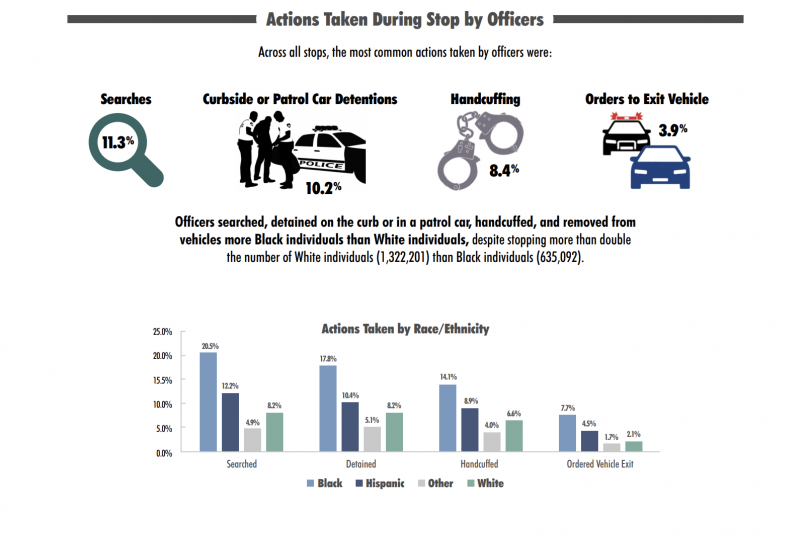 The latest annual report on racial and identity profiling based on stop and search data submitted to the California Department of Justice digs into continued disparities in law enforcement interactions with civilians, and offers recommendations for reducing bias in policing.

The yearly reports are a relatively new state requirement brought about by AB 953, the “Racial and Identity Profiling Act” (RIPA). Assemblymember Shirley Weber (D-San Diego) introduced RIPA in 2015, with the intention that the bill would “inform best practices, create and evaluate trainings and policies, and build trust and improve police-community relations.”

For its fourth annual report, the RIPA Advisory Board looked at nearly 4 million stops that the state’s 15 largest police agencies conducted between January 1, 2019, and December 31, 2019.

The California Highway Patrol accounted for more than half (54.4 percent) of the 3,992,074 stops analyzed.

The state’s 452 law enforcement agencies are broken into “waves” based on their number of sworn officers, and this year’s report only includes stop data from Waves 1 and 2 — agencies with 667 sworn officers or more.

Approximately 85 percent of the stops were initiated in response to traffic violations, according to the agencies’ data. “Reasonable suspicion” of criminal activity accounted for another 12.1 percent of the reported reasons for stops.

(The first wave of law enforcement agencies — those with more than 1,000 sworn — did not have to collect and subsequently report stop data through RIPA until July 1, 2018, so this year’s report contains the first full year of reported data.)

During the second half of 2018, 15.1 percent of the people whom law enforcement stopped were Black. That proportion grew to 15.9 percent in 2019, according to the RIPA analyses. Yet, Black people make up just 7 percent of the state’s population.

Black people were searched at 2.5 times the rate of their white counterparts. Officers searched approximately 8% of white people they stopped, but 20.5 percent of Black people — the highest rate of any racial or ethnic group.

Black individuals also had the highest rate of being detained on the curb or in a patrol car (17.8 percent), handcuffed (14.1 percent), and being ordered to exit their vehicles (7.7 percent).

Officers found individuals in possession of “contraband” or evidence in 22.2 percent of searches of white people and their property, coming out to 1.9 percent higher than the discovery rates of the more frequently occurring searches of Black people in California.

Black and Latino people were 1.45 times and 1.18 times more likely to have police use physical force against them during a stop than against white people.

During the twilight and dark hours, when it is likely more difficult to perceive a person’s racial/ethnic identity — what the report terms the “veil of darkness” — the rate at which police stopped Black and Latino individuals compared to white people dropped.

In addition to stop and search data, the report dives into civilian complaints about their encounters with the 15 largest law enforcement agencies.

The LAPD had the highest number of reported complaints, by far — 2,205, compared with the Oakland PD’s 1,215 and the LASD’s 1,010. Between the three agencies, the LAPD also had a much larger proportion of profiling complaints, at 19.3 percent.

The LASD reported that 6.7 percent of complaints were related to profiling, while the Oakland PD registered the proportion as 3 percent.

Notably, none of the San Francisco PD’s 842 complaints were categorized as profiling complaints.

Recording fewer racial profiling complaints, and complaints in general, is not necessarily indicative of fewer problems between law enforcement officers and community members.

Accessibility varies across jurisdictions for individuals seeking to file official complaints against officers and agencies. And the fact that, across the state, few complaints are sustained and result in any kind of discipline or training for officers may discourage people from submitting their grievances.

In Los Angeles County, some community members mistrustful of the LA County Sheriff’s Department have called on the Office of Inspector General to create an independent complaint system as an alternative to complaining to the LASD directly.

The RIPA advisory board agreed that agencies should consider “the creation or expansion of independent civilian complaint review boards and community-centered mediation resources.”

The board also examined complaints as a whole, from the 452 law enforcement agencies required to report stop data under RIPA. Out of those 452 departments, 146 reported 1,153 complaints alleging racial or other identity profiling. And 955 of those reached disposition in 2019. Two percent — just 19 — of those complaints were sustained by the departments. Officers in approximately 13 percent were exonerated, while 75 percent of complaints were ultimately labeled as unfounded. The final 10 percent were otherwise not sustained.

When the board looked at all the complaints, not just profiling complaints, the number of sustained allegations rose to 11 percent (971 complaints). The number of exonerated law enforcement actions also jumped to 29 percent, while unfounded and not sustained outcomes occurred in 49 percent and 11 percent of cases, respectively.

The RIPA board said it hoped that the hard data provided in the report will directly lead to changes within law enforcement agencies as well as better-informed legislative reforms.

The group laid out a number of “best practice” recommendations for law enforcement agencies to adopt in order to reduce disparities caused by racial and identity profiling.

In this latest report and previous reports, the RIPA board called on agencies to increase access to the complaint process, by posting the form online, allowing multiple methods of submission, and offering the form in multiple languages. Community members should also be able to submit complaints anonymously or through a third party.

The board reiterated its previous call for state legislators address an issue in a section of the CA Penal Code that lays out requirements for submitting complaints. These requirements, which criminalize the filing allegations against a police officer if the complainant knows the allegations are false, “can have a chilling effect” on the submission of complaints.

The board also recommended that state legislators keep an eye on whether counties are using money from Realignment (AB 109) and the Mental Health Services Act on law enforcement activities rather than on community-based services. These monies could be used for community-based alternatives to law enforcement responding to mental health crises.

Another issue the report addresses is the issue of bias by proxy caused by 911 calls for service made by people with “false or ill-informed claims about persons they dislike or are biased against,” as in the case of Amy Cooper, the woman videotaped calling 911 to make false claims against Christian Cooper, a black man out birdwatching, after he asked her to put her dog on a leash.

“Law enforcement’s response to such calls is critical because these interactions may involve life and death situations for the caller, the officer, and the subject of the call,” the report stated. “How law enforcement responds can shape community expectations and perceptions of law enforcement more broadly. The Board believes it is imperative to improve law enforcement response models to protect all members of the community, regardless of race or identity, especially when responding to individuals in crisis.” These issues require “education, reform, and training for the public, law enforcement, and dispatchers,” and could be combated by prioritizing community-based alternatives to law enforcement intervention.

Referencing recent reports of police officers using social media and text messages to share racist and other “bigoted” and “offensive content,” the advisory board also recommended that agencies routinely “audit department-issued cell phones and computers issued to in-service officers,” and “proactively conduct a review of their personnel’s social media to identify problematic behavior.”

Law enforcement agencies, the group said, should also stop posting mug shots online “to reduce the influence of existing implicit biases that officers and the public may have.”

The new report noted that starting this year, state law will require agencies to have prospective recruits go through a screening meant to root out explicit and implicit biases against race, ethnicity, nationality, gender, disability, and other identities. The RIPA board also calls for more training and education around biased policing.

“Any meaningful effort to address bias in policing must also recognize policy decisions and agency practices that drive disparities, such as heavily policing certain neighborhoods,” the board members wrote.